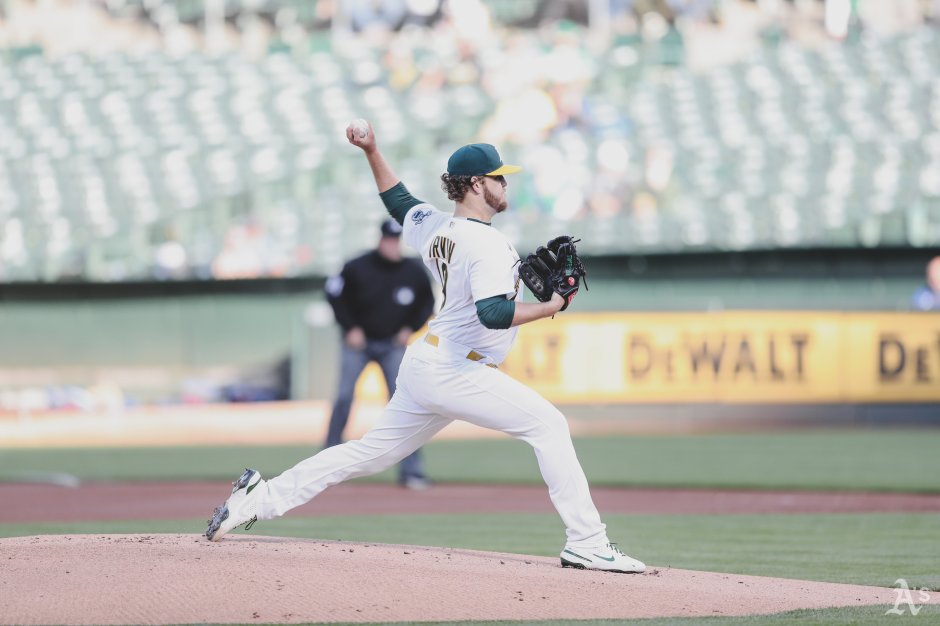 Oakland A’s starter Cole Irvin throws against the Toronto Blue Jays line up at the Oakland Coliseum on Tue May 4, 2021 (@Athletics photo)

OAKLAND–As the daytime weather begins to warm up (never mind the chilly nights), Bay Area baseball is beginning to seem real. So it might be a good time to take a glimpse, however cursory, at the standings, just to get an idea of what the A’s position is at the moment, no matter how fleeting that moment may be.

This morning, the Athletics, in spite of their recent stumbles in Baltimore and St. Petersburg, stood at the top of the AL West, two games ahead of Houston and Seattle, who were locked in a virtual tie for second. Oakland’s starting pitcher for tonight, lefty Cole Irvin, has been an important element in getting the team past its early season debacle (to which he also contributed) and achieving its current, very tentative, hold on the league lead. He entered the game with an over all mark of 2-3, 3.67, but had been 2-1, 1.56 over his last three appearances.

Anthony Kay, Irvin’s opposite number for Toronto, who entered the day trailing the Red Sox by two games in the AL East, brought an 0-1,10.80 record into the game. He features a four seam fast ball, change up, and curve. He’s been known to have thrown in an occasional slider or cutter just often enough to keep batters uncertain about his intentions.

Kay was the Mets’ first round draft pick in 2016. He sat out the 2016 and ‘17 seasons recovering from Tommy Johnson surgery, pitched in the minors in 2018 and ‘19 and was traded with Simeon Woods Richardson to Toronto in July of the latter year for Marcus Stroman and cash considerations. He made his major league debut a little less than two months later.

The clubs traded zeroes for an inning and a half, and then the A’s bats came alive. Sean Murphy beat out a broken bat roller to second to open the frame. Matt Chapman followed with a liner up the middle to put runners on first and second.

Jed Lowrie went to the opposite field and planted a two run double in the right field corner. His sojourn at second was a short one. Mitch Moreland ddrove a 94 mph four seamer that Kay offered on a 2-1 count 345 feet into the left field seats, his fourth round tripper of the season. Just like that, Oakland was up, 4-0. That was the only frame in which an Oakland A would cross the plate.

Kay stayed in the game through the end of the fourth without allowing another hit, although he did hit one batter and walk a couple more. All four of the runs he gave up were earned, and 41 of his 71 offerings were strikes. His total for hits allowed was four, and that was how many strikeouts he notched up.

His performance actually lowered his ERA to 9.82. He suffered the loss, his second in as many outings. Right hander Trent Thorton took his place on the rubber for the Jays and pitched effectively, striking out three and holding Oakland to one hit and a walk until Ty Tice relieved him with two out in the bottom of the seventh. He, too, closed the door on the A’s.

Marcus Semien put the visitors on the board with a 3-2 two out double with two down in the top of the sixth. His hard liner to the base of the left center field wall plated Santiago Espinal, whose single two batters earlier was only the second safety Toronto had managed to hit all evening.

102 pitches (71 strikes) over eight innings were enough to ensure Irvin’s third victory of the season, He yielded only one (earned) run on three hits and a walk. Yusmeiro Petit earned his first save since 2017 by retiring the top of the Blue Jays line up in order in the ninth.

Tomorrow, the A’s opponents’ starting pitcher will be, for the fifth straight game, a southpaw, when Robbie Ray (1-1, 2.78) takes the mound against Chris Bassitt (2-2, 3.93) at 6:40. That will be followed by a 12:37 day game to close out the Toronto series before the pesky Tampa Bay Rays open a three game set at the Coliseum.