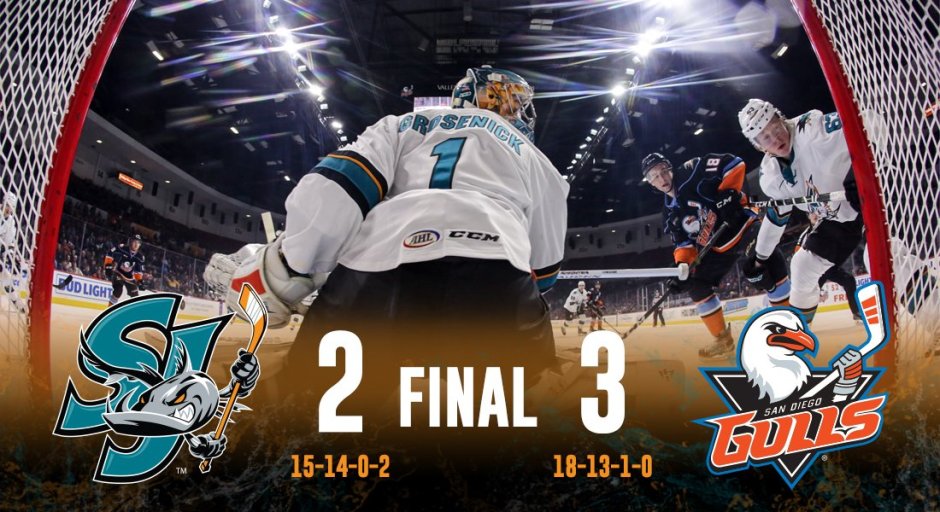 The San Jose Barracuda were looking to write a positive page against the San Diego Gulls in 2018 and rebound from a two-game losing skid at the Valley View Casino Center on Saturday night.

Previously, the Barracuda matched a franchise high with 46 shots on net, but suffered a 5-0 blowout from the Gulls on Jan. 5.

Grosenick made a noteworthy save to open the first period. Shots were 8-6 in favor of the Gulls midway through the first, but the Barracuda picked up the pace as time went by.

Radim Simek was called for cross-checking and the Barracuda went on the penalty kill for the remainder of the first.

The Barracuda put 16 shots on goal, but they left the first scoreless against the Gulls.

The Gulls drew first blood with a power play goal for a 1-0 lead at 14:38. Eric Fehr poked in the rebound for his team-leading 11th goal of the season.

Filip Sandberg scored what looked like a goal off a strange bounce, but the officials waived it off, claiming they saw a high stick. No goal for San Jose.

The Barracuda tied the score at one apiece with an unassisted goal from Adam Helewka with 5:01 left in the second.

Both teams ended up in the same place, but this time around, the Barracuda and Gulls each scored a goal apiece after the second. Shots were 30-23 in favor of San Jose.

The Gulls’ lead was short-lived as Emerson Clark scored off of a point-blank opportunity at 16:04.

Just when you thought the Gulls were ready to give up on the game, San Diego regained the lead, 3-2, on Sam Carrick’s wrist shot en route to the opposing net.

Despite leading in shots, 42-30, midway through the third, San Jose trailed San Diego 3-2.
The Barracuda still had a chance as they went on the power play while the Gulls’ switched on their penalty kill, which eventually worked.

The Barracuda lost to the Gulls 3-2 on the road.

Notes
USA Hockey announced on January 1 during the second intermission of the Winter Classic between the New York Rangers and Buffalo Sabres at Citi Field in New York that San Jose Barracuda captain John McCarthy had been selected to the United States men’s ice hockey team for the 2018 Winter Olympic Games. The Olympics will be held from Feb. 9-25 in Pyeongchang, South Korea.

The AHL announced on Thursday that Barracuda goalie Antoine Bibeau has been selected to represent San Jose at the 2018 All-Star game in Utica, N.Y., later this month.

Barracuda rookie forward Rudolfs Balcers added another assist in San Jose’s last game and now ranks T-10th in the AHL among first-year players in points (23) and T-sixth in assists (16). Balcers leads the Barracuda in points, assists, and is tied with Danny O’Regan and Brandon Bollig for the team lead in goals with seven.

Barracuda head coach and Bay Area native Roy Sommer collected his 700th AHL win of his career on Dec. 3 at Bakersfield, 2-1. Sommer is the first coach in the 82-year history of the AHL to reach 700 coaching wins.

Up Next
The Barracuda return to SAP Center on Tuesday, January 9, where they’ll host the San Antonio Rampage  at 7 pm PT.