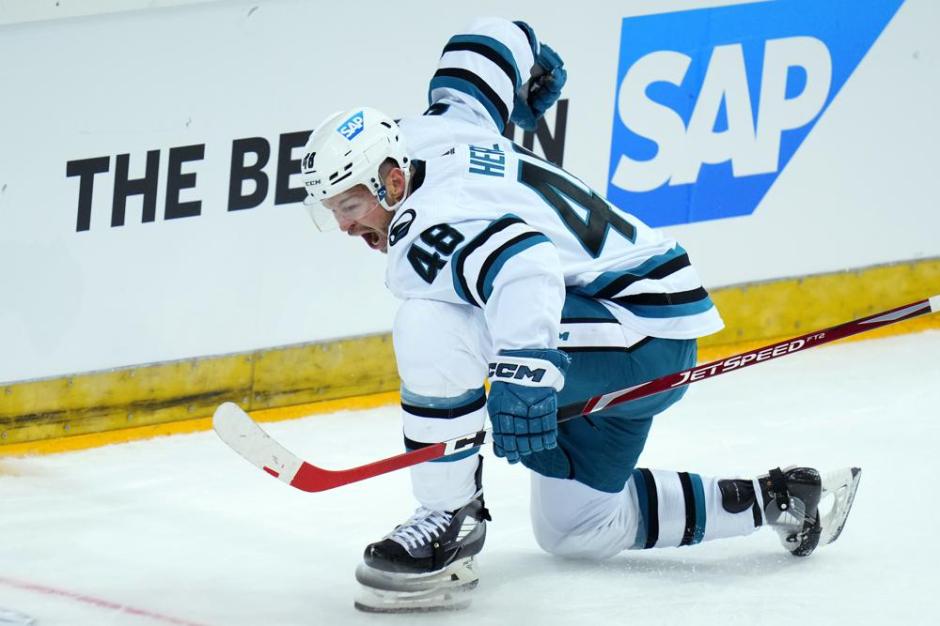 San Jose Sharks Tomas Hertl is exuberant after scoring in front of his hometown crowd in Prague but it would end up being San Jose’s only goal of the game. As the Sharks drop game one to the Nashville Predators in the NHL Global Series on Fri Oct 7, 2022 (AP News photo)

There was a storybook moment but no happy ending for the San Jose Sharks Friday in Prague with the Sharks losing the season opener 4-1 to the Nashville Predators. Tomáš Hertl scored playing in front of his hometown crowd at O2 Arena, but San Jose couldn’t pick up a win in the first game under new general manager Mike Grier and head coach David Quinn.

Nashville took an early lead with Kiefer Sherwood 8:36 deflecting a puck past Sharks netminder James Reimer 1:01 into play. Hertl responded just by beating Nashville goalie Juuse Saros on a scrambling play 8:36 into the first period. Hertl, Timo Meier and former Pred-turned-Shark Luke Kunin (an assist apiece on the play) all put in yeoman’s work at around the crease and in the corners on the shift, fighting for and winning the loose puck battles to create the chaos for hometown Hertl.

Eeli Tolvanen scored the game-winner on another early strike, this time 1:24 into the 2nd period and Nino Niederreiter lit the lamp with 4:46 left in the period to give Nashville a 3-1 lead. Matt Duchene potted the empty netter with 32 seconds left to finish of the scoring.

The Predators outshot the Sharks by a slim 32-31 margin and neither team capitalized on the four power play opportunities each team received. The Sharks did however score in the seconds after a penalty.

The Sharks have a chance at leaving Prague with a happy (long) flight as they wrap up the 2022 Global Challenge Series with another showdown with Nashville Saturday night. San Jose is expected to tap Kaapo Kähkönen in net while the Predators will most likely choose between one of Connor Ingram or Kevin Lankinen.

Notes: The Sharks won the faceoff battle 36-30 with Nico Sturm winning 7 of 9 faceoffs…Newcomer Luke Kunin was the Sharks leader among forwards in TOI, playing 21:23 including a whopping 3:52 on the penalty kill…As expected, youngsters William Eklund and Thomas Bordeleau were not in Quinn’s Sharks lineup… Marc-Edouard Vlasic played 20 minutes in the season opener after playing 20+ minutes only three times last season…Jonah Gadjovich picked up the Sharks first fighting major of the year, dropping the gloves with Mark Borowiecki in the second period… Alex Barabanov was not in the lineup as he continues to recover from an injury, while Sturm drew in after missing out on playing in his home country against Eisbären Berlin on Wednesday…Markus Nutivaara also remained out. 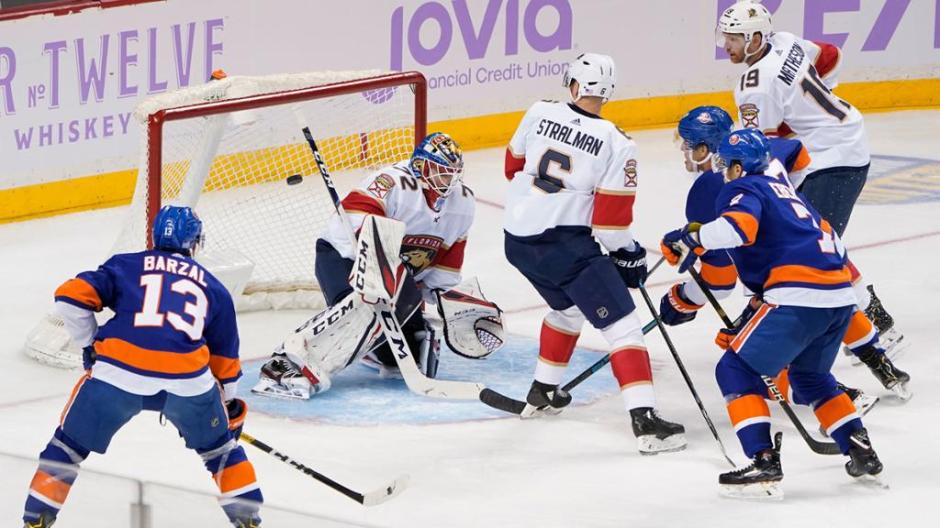 nhl.com file photo: The Florida Panthers hosting the New York Islanders earlier this season will be meeting each other for the Extended Qualifying Rounds of the Stanley Cup Playoffs

#1 Florida Panthers and New York Islanders are scheduled to face off in a five game qualifying series round. Both teams struggled towards the end of the regular season with the Panther losing 12 of their last 18 games and the Isles losing nine of their last 11. Given the numbers and two months off from the shutdown will you see rusty play or will both teams be able to salvage some fire in their bellies and make it an interesting post season?

#2 How strange is it that the Edmonton Oilers are the only team that is in the qualifier division. The Oilers finished second in the Pacific Division but under the Return to Play plan the Oilers are seeded fifth and will play the 12th seeded Chicago Blackhawks. Oilers team captain Conner McDavid said the Oilers have to look it as a sacrifice to be in the play in round although the team had a good record. They are not only taking it for the team but for the league as well.

#4 The Montreal Canadiens look at being in the qualifying round against the Pittsburgh Penguins as a second chance. The Habs were 10 games out of a playoff position when play was suspended March 12th the Canadiens had the lowest points percentage and 31-31-9 record.

#5 The San Jose Sharks Evander Kane says that white athletes need to speak out against systematic racism in the US. Kane said high profile players in different sports like the Tampa Bay Bucs quarterback Tom Brady and the Pittsburgh Penguins Sydney Crosby need to join in to support the fight.

Join Mary Lisa every other Sunday for Headline Sports at http://www.sportsradioservice.com 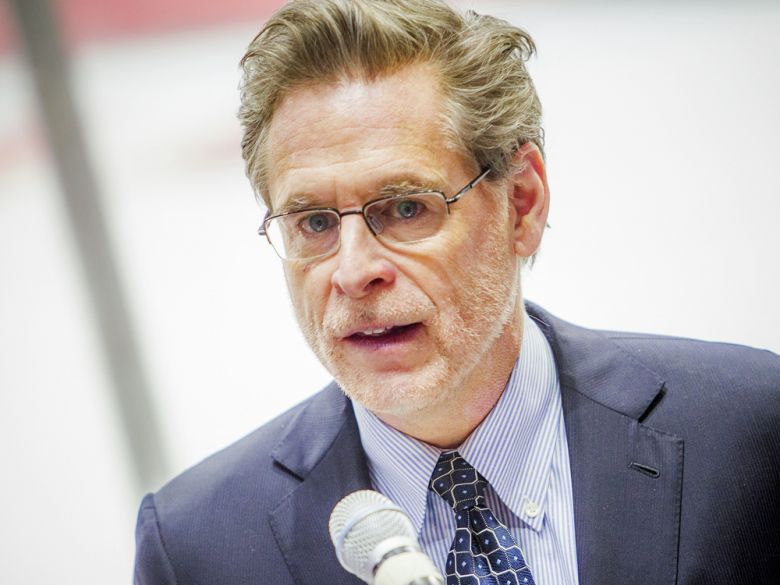 Daniel Dullum does the NHL podcasts each Sunday at http://www.sportsradioservice.com 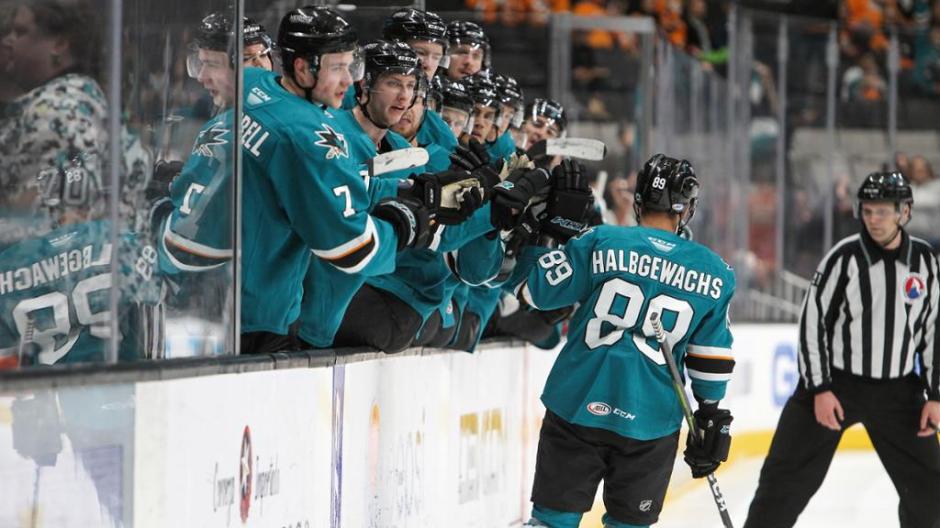 #1 The San Jose Sharks coming back from a three-game road trip that went 1-2 and after going 0-4 in the first four games got their legs and beat the Chicago Blackhawks for their first win of the season on Thursday, October 10th, but it was the addition of Patrick Marleau that seemed to change the mood in the dressing room.

#2 What were some of the vast improvements you saw after Marleau’s return to the Sharks?

#3 In the game against the Calgary Flames on Sunday night, the Sharks got goals from Timo Meier, Kevin Labanc, and Tomas Hertl and got some great goaltending from Martin Jones, who stopped 30 out of 31 shots for the win.

#4 It’s been only two wins, but in those two wins, the Sharks looked like a different team after losing their first four games.

#5 The Sharks host the Carolina Hurricanes (6-1-0) Wednesday night at SAP Center. How much of a test would you say this game will be as the Sharks take on a very talented Canes team?

Len Shapiro does the San Jose Sharks podcasts each Wednesday at http://www.sportsradioservice.com 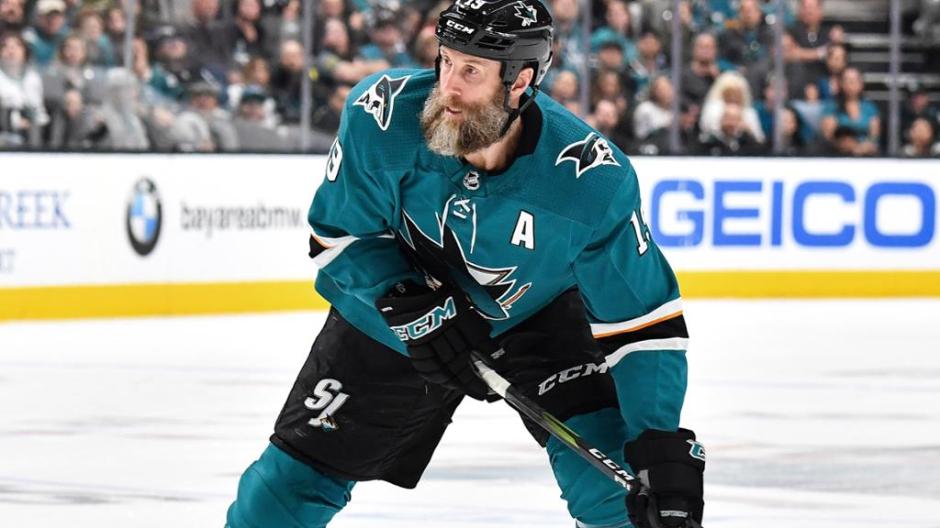 photo by nhl.com: San Jose Sharks Joe Thornton stated that he would like to stay with the Sharks for at least one to five more years.

On the SJ Sharks podcast with Mary Lisa:

#1 Joe Thornton plans to resign with the Sharks for the 2019-20 season he’s almost 40 had some injuries in past season can you see him entering September and keeping up with the younger players?

#2 Thornton’s plans are to stay with San Jose and he hopes to keep this up for at least five more years if he could he stay healthy.

#3 Thornton has had knee injuries he tore his ALC and MLC in his left knee in 2017 and last season tore his MCL in his right knee in 2018. Thornton in confident he’s back and there are no issues going into next season.

#4 The Philadelphia Flyers will absorb the $3.8 million that former San Jose Shark defenseman Justin Braun had remaining on his contract. Braun was dealt for draft picks Mary talks about how Braun will fit into the Flyers system.

#5 The biggest move was on Tuesday when the Sharks signed Erik Karlsson for a $92 million eight year deal. Karlsson after the post season was expected to go shopping for a team most likely the Ottawa Senators his former team. The Sharks were determined to keep him and got him to the table for a long term deal.

Mary Lisa is a beat writer for the San Jose Sharks and podcasts on the Sharks during the Sharks season at http://www.sportsradioservice.com

#1 On the Facebook Red Table Talk show with Jada Pinkett, NESN.com reported Golden State Warriors wife Ayesha Curry said that while she didn’t like groupies hanging around her husband, she had developed a bit of “an insecurity” and getting “zero male attention.” One writer Bari A Williams tweeted Ayesha might feel this way is because she’s 30, has three kids and might not feel and look the same way she did before she had kids.

#3 St. Louis Blues goaltender Jordan Binnington said about San Jose Sharks Timo Meier’s one hand pass assist that led to the Sharks’ game-winning goal in Game 4 for the overtime win on Eirk Karlsson’s goal: “It’s just madness. You hope for the best and try to close the door.” The Blues were pretty angry and took it out on Game 5 in San Jose on Sunday for the win 5-0 to take a 3-2 series lead.

#4 The red-hot New York Yankees have won 10 of their last 14 games and Yankees owner Hal Steinbrenner said of the 17 starters or key players who are on the injured list the replacement by the younger players have come out and done a great job. ”Young guys are stepping up, they realize this is an opportunity that they might not otherwise have had and they’re making the most of it.” said Steinbrenner.

#5 The Oakland A’s, during this current road trip after losing two straight in Seattle, won three straight in Detroit. The A’s regrouped after the pair of losses to the Mariners and are really making a go of it in Detroit.

Barbara Mason is filling in for Amaury Pi Gonzalez on the News and Commentary podcast at http://www.sportsradioservice.com and is a freelance reporter for Area Grande Spanish Newspapers 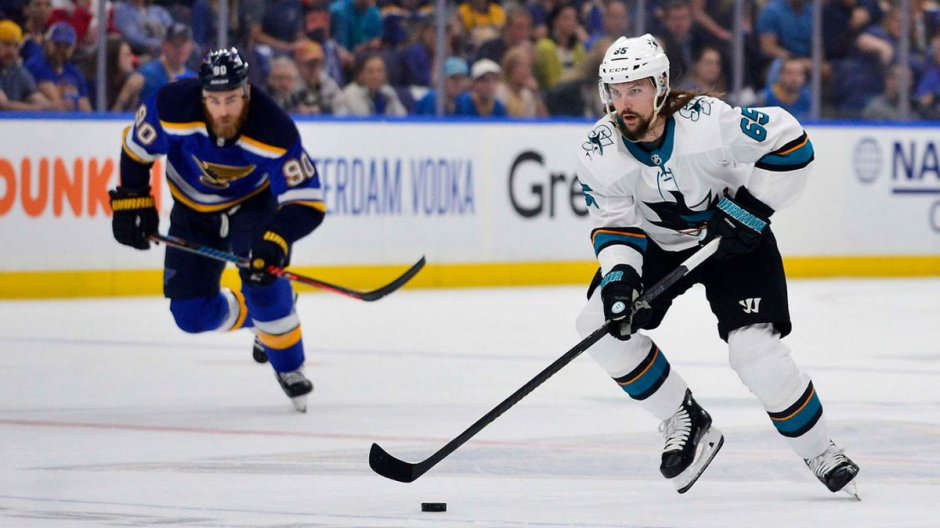 #1 Matt talks about the advantage for the Boston Bruins to have some time off before getting into Game 1 of the Finals against either St. Louis or San Jose.

#2 In the series against the Carolina Hurricanes, the Bruins made it look easy. They have been a very consistent team.

#3 Usually the team that has finished early that meets a team that has either just finished Game 7 or their playoffs or  at a disadvantage because of the lag time.

#4 Looking up and down the roster, the Bruins are loaded they have a team that would be favored in meeting either San Jose and St Louis. Who would you see them in the next round?

#5 Lastly, talk about the year that Bruins goalie Tuukka Rask. He has had a great year in net. How do you see him matching up against either the Blues or Sharks’ offensive attacks?

#1 As San Jose Sharks’ Justin Braun said after the game in St. Louis on Friday night, the start of the game buried the Sharks.

#3 After the game, Sharks head coach Peter DeBoer said the series is tied, the Sharks have home ice and DeBoer says he feels good about it.

#4 Blues goaltender Jordan Binnington stopped 29 out of 30 shots, shutting out the Sharks in the first and second periods.

#5 Game 5 comes back to San Jose on Sunday night at SAP Center. Despite the loss, the series with home ice for the Sharks looks to be in their favor. 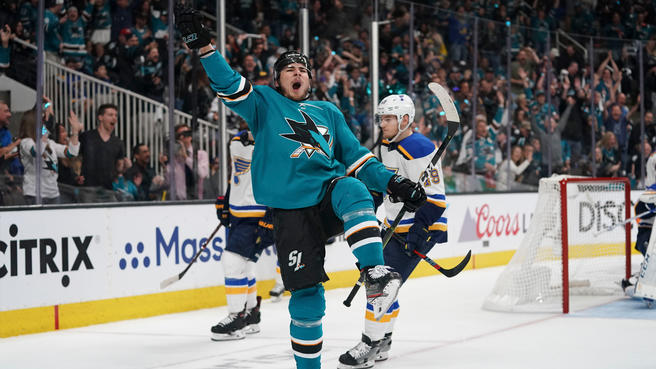 photo from nbcsports.com: The San Jose Sharks’ Timo Meier can’t contain the thrill of scoring one of his two goals in the Sharks win over the St. Louis Blues on Saturday in game 1 at SAP Center in San Jose.

Daniel does the NHL Stanley Cup Playoffs podcasts each Sunday at http://www.sportsradioservice.com