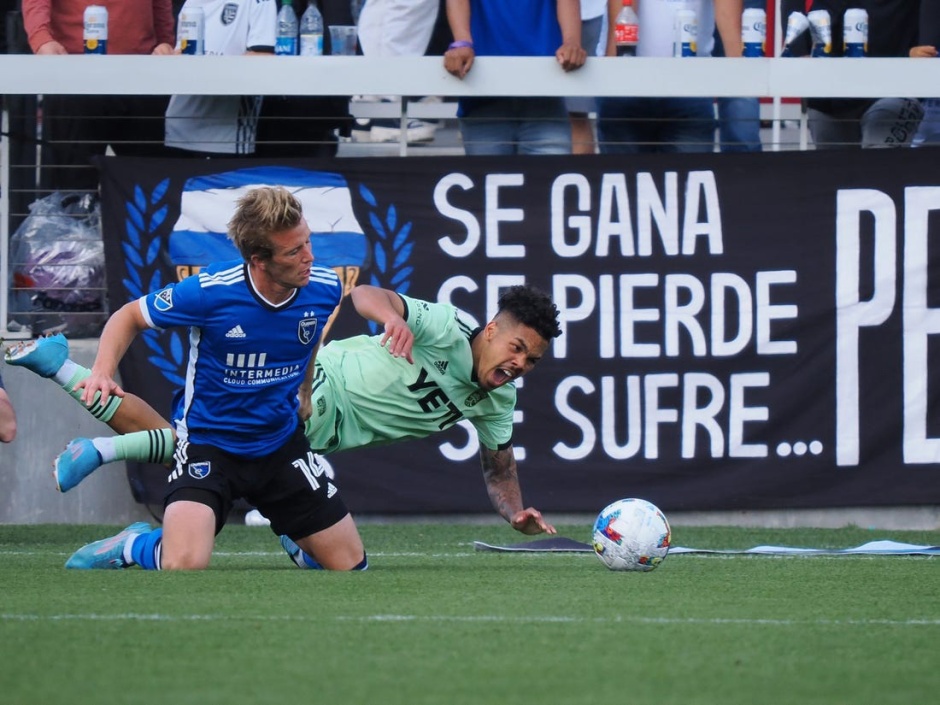 There’s something about Austin and comebacks.

Jeremy Ebobisse scored the equalizing goal in the 88th minute as the San Jose Earthquakes escaped the Lone Star state with a 3-3 draw against Austin FC on Saturday evening at Q2 Stadium.

San Jose snapped a three-match losing streak with the first point in its last four matches. Austin FC has points in eight of its last nine matches dating back to June. The Quakes remained undefeated against Austin FC (2-0-3)

The late match heroics came when Cristian Espinoza sent in a cross from the right wing into the center of the box. No one from Austin FC marked Ebobisee who headed the ball past goalkeeper Brad Stuver for his team leading 13th goal of the season. He now ranks tied for third in goals in MLS this season.

‘Quakes goalkeeper Matt Bersano made his first career MLS start in place of JT Marcinkowski, who was out with concussion like symptoms.

There were plenty of fireworks in the first half as both teams combined for four goals in the opening 45 minutes.

Austin FC (13-6-5-45 points) drew first blood in the first blood in the sixth minute off a set piece. Diego Fagúndez centered his corner kick into the box where unmarked Julio Cascante headed the ball past Bersano for his second goal of the season.

San Jose (5-10-9-24 points) answered back two minutes later. Paul Marie sent in a ball to Benji Kikanovic whose one touch off his foot knuckleballed past Stuver into the back of the net for his fourth goal of the season.

The Earthquakes gained their only lead in the 20th minute. After Espinoza’s corner kick was punched out by Stuver into the middle of the pitch, Marie gathered the ball, made one touch with the ball before blasting a shit from 30 yards out into the upper left corner of the net for his first goal of the season.

Austin stormed back in the 26th minute with the first of Sebastián Driussi’s two goal on the evening. Ethan Finlay caught the ‘Quakes back on their heels when he centered a pass over to a wide open Driussi who buried the ball in for his 15th goal of the season.

Druissi wans’t done as he gave Austin FC the lead back in the 44th minute. Finlay centered a ball into the box that knocked away by a sliding Judson. Driussi kept the ball alive before tapping into an empty net for his team leading 16th goal of the season.

Bersano finished the match with three saves on six shots to earn his first point. Stuver made two saves on five shots on target.

Espinoza had his ninth assist of the season and 39th assist of his MLS career. He has now assisted four of Ebobisse’s 13 goals this season and is one assist away from tying Chris Wondolowski for fourth-most in assists in club history.

San Jose acquired two players at the transfer deadline. The club announced today the acquisition of center back Rodrigues on a 12-month loan with option to buy or extend through the end of 2023 from Brazilian side Grêmio. Rodrigues will occupy an international spot on the Quakes’ roster. Also, on Friday they signed veteran LaLiga fullback and Equatorial Guinea international Carlos Akapo. The deal for the 29-year-old – who last featured for Cádiz CF in the Spanish top flight – runs through the 2023 season, with a club option for 2024.

UP NEXT: San Jose stays in Texas when they visit FC Dallas on Saturday 8/13 at 6:00pm at Toyota Stadium