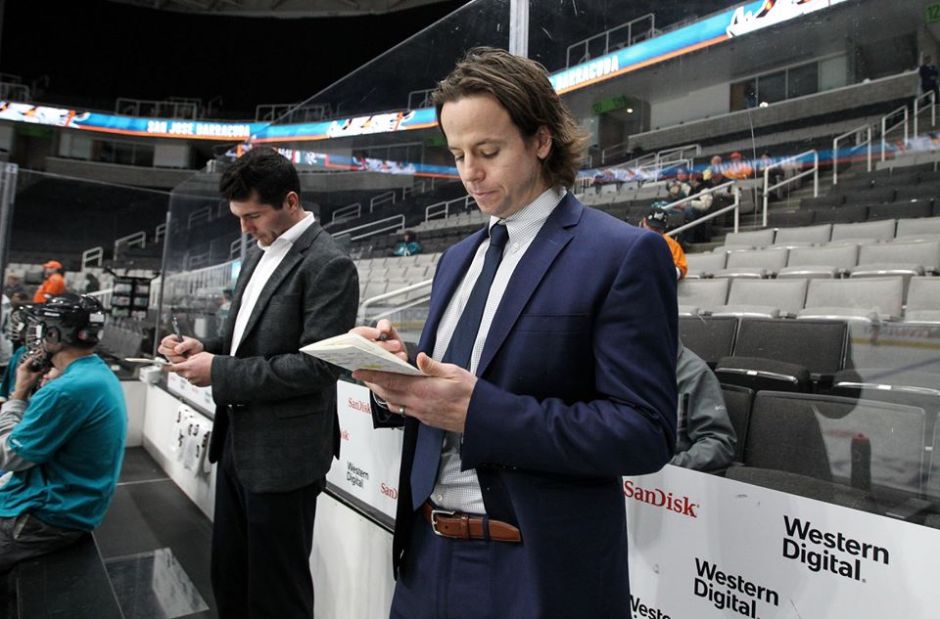 sjbarracuda.com photo: San Jose Barracuda assistant coach John McCarthy on Dec. 10, McCarthy, 33, suffered an Ischemic stroke due to a previously undetected hole in his heart. McCarthy immediately retired from the game and has been working behind the Barracuda bench. Here he is on Friday against the visiting Stockton Heat.

SAN JOSE, Calif- The Stockton Heat proved why they are the top offensive team in the AHL this season. They exploded for five goals in the second period, including a hat trick from Alan Quine, en route to a 8-1 blowout victory over the San Jose Barracuda on Friday afternoon at SAP Center.

Stockton snapped their two-game losing streak and have won the first five meetings against their NorCal rival. For the ‘Cuda they have lost four of their last five games.

Stockton (18-5-2-3) drew first blood late in the first period when Quine stuffed home a puck that pinballed out in front of the crease past Cuda goalie Josef Korenar for his fourth goal of the season at the 16:02 mark. Glenn Gawdin and former ‘Cuda forward Buddy Robinson received helpers on the goal.

Despite controlling play for the most of the opening 20 minutes and outshooting Stockton 7-4, San Jose (10-15-0-2) found itself down 1-0 as they headed into the first intermission.

The Heat doubled their lead early in the second period. Corey Schueneman fired on net that Korenar made the initial save but the rebound jumped out to Quine all alone and he buried home the rebound for his second goal of the game and his fifth of the season at the 5:45 mark.

Stockton scored their third unanswered goal just under two minutes later. Zac Leslie found Matthew Phillips down low and he chipped it over the pad of Korenar for his team leading 14th goal of the season at the 7:21 mark.

Quine completed the hat trick when Robinson set him up on a 2-on-1 rush where the former sixth round pick of the Calgary Flames fired a one-time past Korenar for his sixth goal of the season at the 11:20 mark. Quines has scores in three straight games against San Jose.

The goal ended the afternoon for Kornear who gave up four goals on just 12 shots in 31:20. Andrew Shortridge replaced Korenar between the pipes.

The Heat kept their foot on the gas pedal when Leslie sent an outlet pass up the ice that led to a breakaway for Gawdin.  Gawdin skated in and beat Shortridge with a wrist shot over the glove on the short side for his 10th goal of the season at the 14:11 mark. It was the first shot Shortridge faced after replacing Korenar.

Stockton made it 6-0 right before the end of the middle frame when Phillips set up Austin Czarnick and he snapped a wrist shot past Shortridge for his third goal of the season at the 18:05 mark.

The Heat continued their dominance in the third period when Quine returned the favor when he fed Schueneman from the point and he blasted a low slapshot past Shortridge for his first goal of the season at the season at the 3:50 mark. Quine ended the afternoon with a five-point game. (3G,2A).

San Jose spoiled the shutout bid for Heat goalie Jon Gillies on the power play. Maxim Letunov fed a pass over to Sasha Chmelevski and he fired a wrist shot to the farside under the cross bar past Gillies for his fourth goal of the season at the 10:58 mark.

The Heat concluded the scoring when Gawdin led a 2-on-1 break and fed a pass over to Robinson and he joined the goal scoring party when he buried a shot past Shortridge for his 13th goal of the season at the 12:48 mark.

Gillies made 25 saves on 26 shots for his seventh win of the season. He is 3-0 versus the ‘Cuda this season. Shortridge made three saves on seven shots in mop-up duty.

Captain John McCarthy announced his retirement from the game of the hockey earlier in the morning due to a medical condition. He will be joining the ‘Cuda coaching staff immediately and will join co-head coaches Jimmy Bonneau and Michael Chiasson on the bench during games. McCarthy, 33, holds all major Barracuda records including games played (275), goals (62), assists (76), points (138) power play goals (17) and short-handed goals (5).

Forward Joel Kellman was called up by the San Jose Sharks. Forward Noah Gregor and defenseman Jacob Middleton were reassigned back to the Barracuda.

Quine now has five career hat tricks. He is the first player to have five points against the ‘Cuda this season.

Leslie had four assists in the game.

The announced attendance was 3,036.

UP NEXT: The Barracuda host the Bakersfield Condors on Sunday 12/29 at 5:00pm at SAP Center.