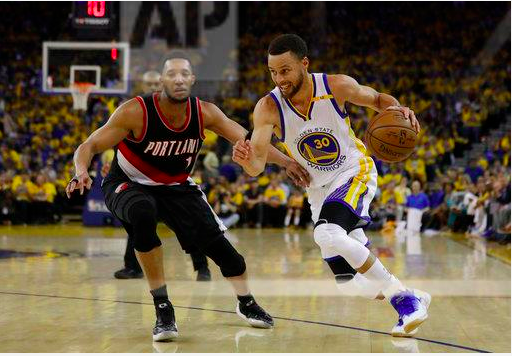 Golden State had gone through rough patches when Kevin Durant went down with an MCL sprain, dropping five of their first seven games without him. With their small forward out with a left calf strain Wednesday, the Warriors were faced with that possibility once again.

But the Warriors certainly did not let their star’s absence affect their play Wednesday, blowing past the Trailblazers 110-81 to take a 2-0 series lead in the Western Conference quarterfinals. Despite a merely average offensive output, the Warriors leaned on lockdown defense to shut down Portland’s high-flying offense, holding them to shoot just 21.2 percent from beyond the arc.

Among the Trailblazers who struggled was star point guard Damian Lilliard, who converted on just 5-of-17 field goal attempts and scored 12 points.

But the Trailblazers went on a strong run to cut the Warriors’ lead to just one point midway through the second. From there, the Warriors kicked it into gear, finishing the game on a 67-39 run to vault past Portland.

Despite an off shooting night, converting on just 6-of-18 field goal attempts, Stephen Curry shouldered the brunt of the load on offense, scoring 19 points and making four 3-pointers.

JaVale McGee came off the bench to shoot a perfect 7-of-7 from the field, chipping in with 15 points while Klay Thompson also added 16.