Oakland Raiders running back Marshawn Lynch (24) is congratulated by quarterback Derek Carr (4) and tackle Donald Penn (72) after scoring a touchdown against the New York Jets during the first half of an NFL football game in Oakland, Calif., Sunday, Sept. 17, 2017. (AP Photo/Marcio Jose Sanchez)

OAKLAND — Coming off a dominate 45-20 Week 2 victory against the lowly New York Jets in their home opener, the Raiders (2-0) play their first of five prime-time games with a cross-country trip to Washington to face the Redskins at FedEx Field with a 5:25 p.m. PT kickoff.

This will be the first game between the two teams since 2013, which resulted in a 24-14 win for Washington in Week 4 at Oakland.

Derek Carr shredded the Jets, completing 23-of-28 for 230 yards and three touchdowns, all to wide receiver Michael Crabtree. Crabtree led all receivers with six receptions for 80 yards while Carr posted a 136.6 passer rating in the game.

Oakland’s running game found open lanes in New York’s defense, racking up 180 yards on the ground, with a 6.7 yards per carry.

Lynch finished with 12 carries for 45 yards and one overly-publicized dance on the sideline early in the fourth quarter with the Raiders holding a commanding 35-13 lead.

Defensively, Oakland’s defense was sound, holding the Jets to 271 yards of total offense and forcing one fumble by safety Karl Joseph, who also registered his first career sack. Joseph’s sack was one of four recorded by the Silver and Black on the day.

Washington (1-1) won in Los Angeles 27-20 behind a 11-yard touchdown pass from quarterback Kirk Cousins to wide receiver Ryan Grant in the final two minutes of the fourth quarter.

While veteran Rob Kelley (22) and rookie running back Samaje Perrine (21) get the majority of carries, fourth-year runner Chris Thompson leads the team with two rushing touchdowns.

Chris Thompson is also a great pass catcher out of the backfield, hauling in one of two Washington’s touchdowns through the air to go along with seven catches for 81 yards this year.

On defense, linebacker Zach Brown is a tackling machine, ranking third in the NFL in tackles with 22 entering Week 3. Third-year linebacker Preston Smith leads the Redskins with two sacks, while fellow linebacker Ryan Kerrigan is second on the team with 1.5 sacks.

The seven-year pro from Purdue has one of Washington’s two interceptions for the season, returning it 24 yards for a touchdown.

Oakland’s offense led by Carr have too many weapons for Washington to handle. Washington’s cornerback tandem of Bashaud Breeland and the trash-talking Josh Norman will be a great test for Oakland’s wide receiving combo of the aforementioned Crabtree, and Amari Cooper, but Carr has improved his throwing mechanics and now can make every throw seem effortless.

Combined that with a versatile ground attack led by Lynch and Richard, (not to mention DeAndre Washington) to go-along with a wild-card like Patterson, Washington will have problems covering all the players the entire night.

This game in Washington could be a “trap” game for the Silver and Black, with a trip to Denver looming in Week 4 if they take the Redskins lightly.

Don’t expect that to happen Sunday night from the Nation’s Capital for the Raiders who have bigger goals in mind this season. 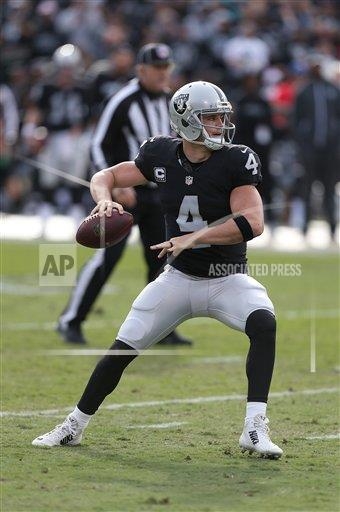 OAKLAND, Calif — Two years ago, the Silver and Black were in shambles at 2-12 when the 8-6 Buffalo Bills came into town looking to earn the franchise’s first trip to the postseason since 1999.

But that was two years ago when quarterback Derek Carr, who was a rookie at the time, displayed early on the talent that many football experts believe will tab Carr as this year’s league MVP that day when he found wide receiver James Jones for the game-winning touchdown in the final seconds giving Oakland a 26-24 victory, eliminating Buffalo from playoff contention.

With both teams tasting the playoffs as the season heads into the final month, Sunday’s matchup at the Oakland Coliseum at 1:05 p.m. will have the feel of a playoff game which should make for a very competitive game.

Carr has the 9-2 Raiders riding a five-game winning streak, and a win Sunday would put Oakland on the doorstep of the franchise’s first playoff appearance since 2002.

Oh yeah, that team reached the Super Bowl that season.

It is still relatively unknown if Carr, who completed 26-of-38 passes for 315, with two touchdowns, and an interception in last week’s 35-32 victory over the visiting Carolina Panthers, will wear a glove in Sunday’s game to protect his dislocated pinkie on his right hand.

During Wednesday’s practice, Carr was seen wearing a glove on his right hand.

Carr took a snap on Oakland’s first drive of the second half and immediately jumped back holding his pinkie. It appeared that Carr pulled from under center too fast, causing the injury.

Carr left the game briefly with the Raiders holding a 24-7 lead, but Carolina would score 18 unanswered points in the third quarter that gave the Panthers a 25-24 lead that left the sellout Raider Nation crowd stunned.

Following a Cam Newton 44-yard touchdown pass to wide receiver Kelvin Benjamin, Carr would throw a 12-yard score to tight end Clive Walford in the fourth quarter to go along with a 23-yard field goal by kicker Sebastian Janikowski to put seal the win for Oakland.

On the season, Carr has thrown for 3,115 yards, 22 touchdowns to just five interceptions while leading the league’s fourth-best passing offense.

As much as Oakland’s high-powered offense (27.9 ppg) has to do with most of the team’s success this season, it has been the play of the defense, most notably defensive end Khalil Mack.

Mack, who was named the AFC Defensive Player of the Month for November, has been a force for Oakland after a slow start of the season.

Against Carolina, Mack was one-man wrecking crew, intercepting the reigning league MVP and returning the pass for a 6-yard score right before halftime, then registering a sack, a forced fumble and recovery on Carolina’s final play of the game.

But Buffalo (6-5) is a team that can give Oakland problems, especially with running back LeSean McCoy and the league’s top-ranked rushing attack, averaging 157.4 yards on the ground a game.

McCoy rushed for 103 yards on 19 carries and scored two touchdowns, one of which went for a career-long 75 yards in Buffalo’s 28-21 win at home in Week 12 over Jacksonville.

The eight-year pro from Pittsburgh is eighth in the league in rushing with 819 yards to go along with nine touchdowns.

Defensively, Buffalo has some great players that Oakland’s stout offensive line will have to contend with on Sunday.

Inside linebackers Zach Brown and Preston Brown have combined for 194 tackles (121 solo), while outside linebacker and ex-Raider Lorenzo Alexander is having a career-year in his 10th year, pacing second behind Denver linebacker Von Miller (12.5) in the NFL in sacks with 10.

Buffalo’s 33 sacks as a team is second only to Denver’s league-leading 35.

The Bills secondary, which gives up just 227.7 yards through the air per game and plagued by injuries, will have their hands full with Oakland’s terrific wide receivers Amari Cooper (66 catches, 922 yards, 3 TDs) and Michael Crabtree (60 catches, 711 yards, 6 TDs) all game long.