Oakland — A’s starting pitcher Chris Bassitt had to throw 31 pitches to get out of the top of the first against the Houston Astros on Saturday afternoon. That usually means two things:

Someone forgot to tell Chris Bassitt that he needed to conform to the standards of baseball on Saturday. After that rough first inning, the A’s starter pulled things together in the second inning.

Bassitt was back in hot water in the top the third inning as the Astros scored two runs on three hits. When the inning ended, there were two Houston runners on base which means the inning could have been much worse.

Bassitt’s team members really picked him up in the home half of the third inning. The Athletics put five runs up on the scoreboard to stake their pitcher to a three-run lead. The amazing part of the third inning rally was the fact that the A’s scored those runs without hitting a home run.

Bassitt pitched a scoreless fourth inning and gave up one run to Houston in the fifth inning to make it a  5-3 game in favor of Oakland. The consensus in the press box was that we had seen the last of Bassitt for the day.

The Astros sent their starting pitcher – Rogelio Armenteros – to the showers and sent Chris Denvenski to the mound to face the A’s in the bottom of the fifth inning. Oakland took advantage of a walk, hit-by-pitch, two singles, and a sacrifice fly to put three more runs up on the board. That cleared the way for Bassitt to come back out for the sixth inning.

The first hitter to face Bassitt in the sixth inning was Yuli Gurriel who singled to left field and everyone thought that was going to be all for Bassitt, but Bob Melvin left the right-hander in the game. The next batter – catcher Martin Maldonado – hit a ball on the ground to shortstop Marcus Semien who fielded it and threw to Corban Joseph at second to erase Gurriel. Joseph turned and threw to first to get Maldonado for the double play. Bassitt was able to get Jake Marisnick to pop out to Joseph at second to end the inning.

Bassitt finished his six innings throwing a career-high 116 pitches. In his postgame comments, mangers Bob Melvin said that Bassitt had told him he was ready to go to 120 pitches to get the job done. That is just plain grit and determination.

With the help of his team on offense, the A’s won the game 8-4 and the winning pitcher was Chris Bassitt who now has a record of 9-5 for the season with a 3.61 ERA.

Without trying to jinx the A’s, they will go for the four-game sweep of the Astros on Sunday 1:07 PM at the Coliseum in what should be an excellent pitching matchup. The Astros will send RHP Zack Greinke to the mound. Greinke is 12-4 on the season with a 2.91 ERA. He was a winner in his last start in Chicago versus the White Sox when he worked 6.0 innings and allowed only two runs in a Houston 6-2 victory.

The A’s will counter with LHP Brett Anderson who is 10-8 with a 3.95 ERA. This will be his 21st start of the season. Anderson was tagged with the loss in his last start on Tuesday in San Francisco against the Giants. He pitched 6.0 innings allowing two runs (earned) off six hits. He walked none and struck out four. 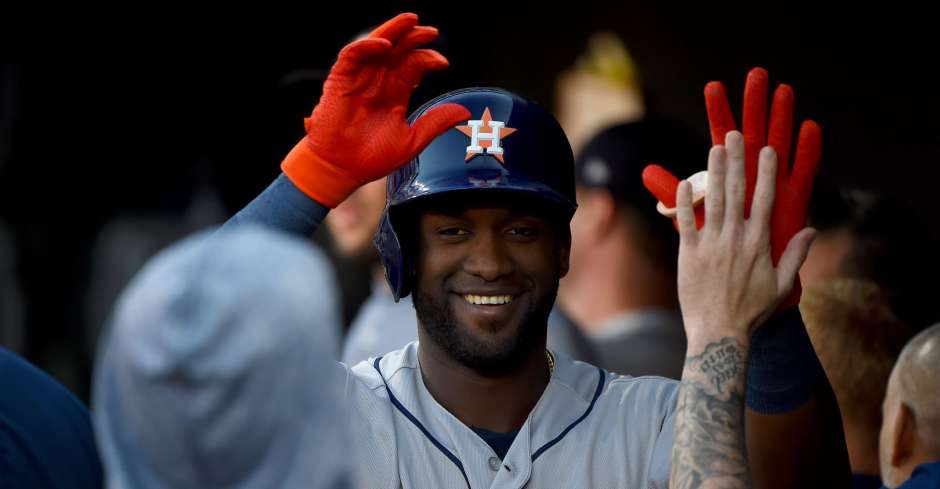 photo houstonchronicle.com: The Houston Astros’ Yordan Alvarez gets congratulations in the Astros dugout after a first inning home run at Camden Yards, the first of three against the Baltimore Orioles in a 21-run win 23-2 Saturday night.

This week on MLB The Show with Daniel Dullum, who is Sports Editor of the Apache Junction/Gold Canyon News at the home office in Gold Canyon:

5 Tim Tebow’s baseball season over due to injury

Catch Daniel each Sunday for the MLB podcast at http://www.sportsradioservice.com