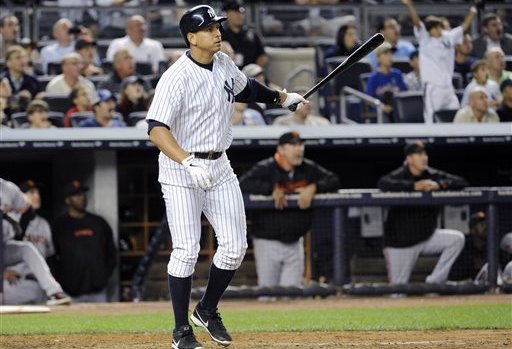 Behind in the count with two outs , Alex Rodriguez changed the game and also passed Lou Gehrig for most grand slams with 24, as New York beat San Francisco 5-1 Friday.

Giants’ starter Tim Lincecum was lifted in favor of George Kontos after 121 pitches and the bases loaded.  Rodriguez entered the inning just 1 for his last 25 and was behind 2-1 when his hit landed with the spectators in deep right field, leading to a much needed win for his team.

It was a tie game since early on in the matchup.

The Yankees’ Alfonso Soriano hit a leadoff home run in the bottom of the first to make the score 1-0.

The Giants tied the game the following inning.  Brandon Crawford was issued a leadoff walk.  One out later, rookie Juan Perez doubled Crawford back to home plate to make it 1-1.

Rodriguez’s grand slam set up came in the bottom of the seventh.  Eduardo Nunez led off with a single and stole second after one out. Brendan Ryan was then hit by a pitch and a fielder’s choice left runners on first and second once again.  Ichiro Suzuki then walked to load the bases.

Sabathia was lifted in the top of the eighth after 107 pitches and issuing a leadoff single in the game that featured two former Cy Young winners .

San Francisco had a one out, runners on the corners scoring opportunity in the top of the first.

The Yankees also had the bases loaded with two outs in the bottom of the third.

Game notes: During the game, Lincecum became the first Giants pitcher with 1,500 strikeouts since  Gaylord Perry in 1971.  Both teams get right back to playing Saturday at 10:05 am with two morning games in a row.