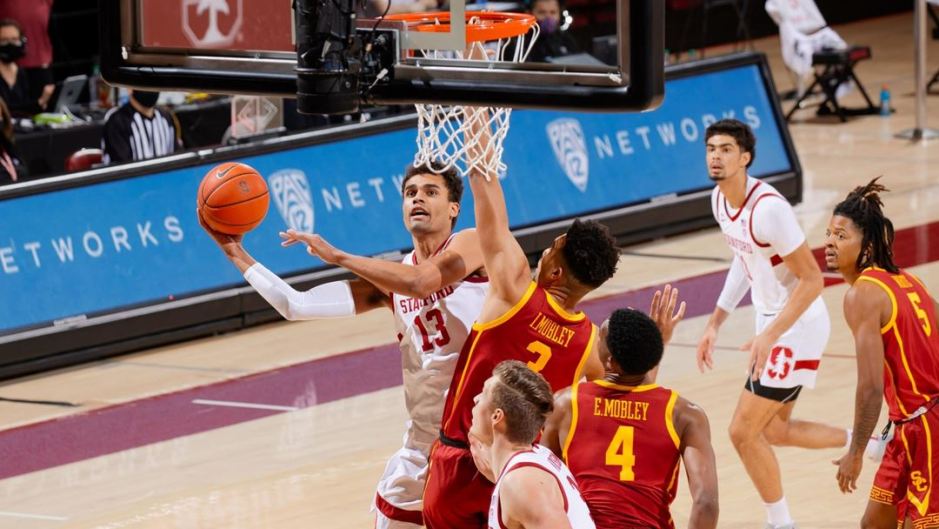 The Stanford Cardinals’ Oscar da Silva (13) drives on the USC Trojan defense. The last meeting between the two teams was postponed and rescheduled for March 3 in Los Angeles. The Cardinal will host the Oregon Ducks tonight at Maples Pavilion in Palo Alto (gostanford.com file photo)

#2 Normally when you get five players in double figures your chances go up for a win but the Cardinal were outscored and the Cougars defense just held them in check to stay ahead.

#3 The Cougars had come off a win against the Cal Bears the Tuesday before they faced the Cardinal. WSU had four scorers in double figures but key factor was Noah Williams who wound up the lead scorer with 40 points an impressive total in college basketball.

#4 The Cougars defense was able to contain Oscar da Silva who scored only 11 points and Michael O’Connell was the Cardinal lead scorer with 17.

#5 The Oregon Ducks (14-9) are at Stanford tonight. The Ducks got whipped by USC in their last game 72-58 Monday night in Los Angeles. The Cardinal play host and after getting beat by the Cougars their going to be pressing too. Jerry, how do you see this match up tonight.

Join Jerry F for the Stanford Cardinal podcasts each Thursday mornings at http://www.sportsradioservice.com 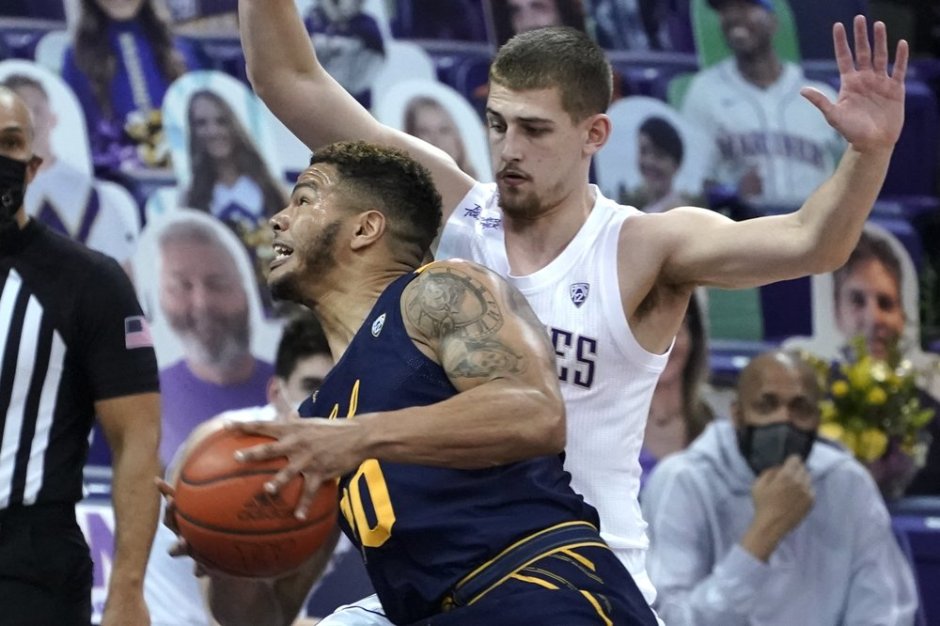 On the Bears podcast with Morris:

#1 The flight from the state of Washington for the Cal Bears (8-17) was only two hours but it had to feel like eight as Cal got served up another cold dish of rough basketball in their loss to their standings neighbors the Washington Huskies (5-17) in Saturday night’s 62-51 loss at Alaskan Airlines Arena in Seattle.

#2 The loss pretty much assures that Cal will finish in last place in the Pac 12 for this season. The Bears will need a miracle as they have two more games left at home.

#3 The Bears suffered their worse shooting performance of the year 27 percent and lost the game by 31 points. The Huskies turned up the defense and Cal just couldn’t hit their shots.

#4 Quade Green led the Huskies in scoring with 17 points and Jamal Bey followed up with 15 points on an offense that gave Cal fits all night.

#5 The Bears return home on Thursday night to close out their regular season facing Oregon State (8-17). Saturday Feb 27 will be their last game of the season at Haas Pavilion against the Oregon Ducks (14-4) third in the Pac 12.

Morris Phillips has podcasted Cal basketball for the 2021 season 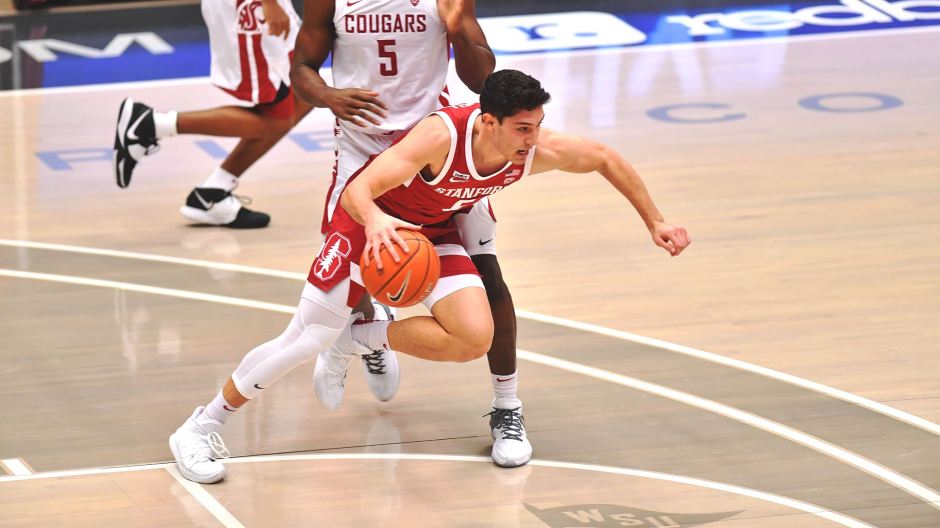 Jaiden Delaire scored 15 points for the Cardinal, followed by Daejon Davis and Spencer Jones with 10 points each. Oscar da Silva – the Pac-12’s second-leading scorer (19.1 ppg) – was held to 11 points before he fouled out in the second overtime.

WSU (14-10 overall, 7-10 Pac-12) used a 9-0 run to close out the third overtime. In that spurt, Efe Abogidi scored five points, Aljaz Kunc had a basket, and Williams capped the run with a floater in the paint.

Williams hit a 3-pointer with six seconds remaining to send the contest into overtime. The Cardinal had the ball with 25 seconds left in the first overtime, but committed a shot-clock violation.

The Cougars also had 24 second-chance points to three for Stanford, and WSU outscored the Cardinal in the paint 40-20. There were 10 lead changes.

The Cardinal return to Maples Pavilion to host Oregon on Thursday. 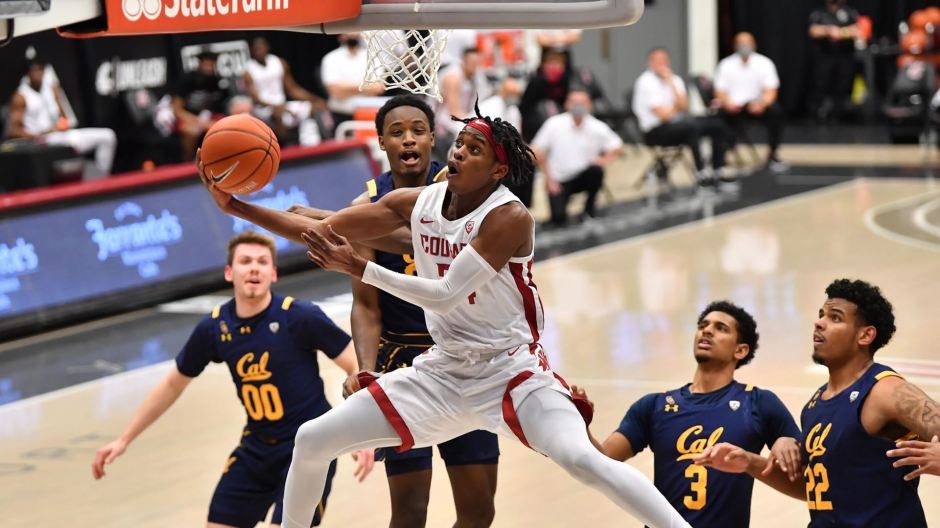 On the Bears podcast with Michael:

#1 After the Cal Bears (8-16) had a huge victory over the Colorado Buffaloes last Saturday things turned for the worse at Washington State and the Cougars had their way with a convincing 82-51 win on Thursday night.

#2 Matt Bradley led the way in scoring for the Bears with 16 and Andre Kelly followed up with 10 points and both were the only ones in double figures.

#3 No way Noah Williams of the Cougars had 32 points no way because there was no way the defense could have shut him down as Williams worked his way through the Cal defense even in the paint.

#4 Michael when you see someone like that having his way with the defense would it have helped if head coach Mark Fox had double teamed Williams?

#5 It’s onto Seattle and the Washington Huskies (4-17) who have lost seven of their last eight games and the Cal Bears have lost nine of their last ten games both teams clash on Saturday at 7:00pm at UW.

Join Michael Duca for the Cal Bears podcasts each Friday at http://www.sportsradioservice.com 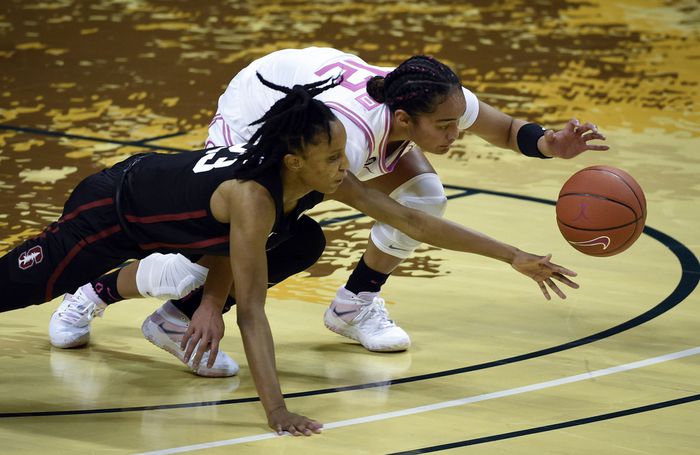 #1 Jerry the Cardinal (19-2) women are on a eight game win streak and are coming off a win at Oregon University against the Ducks (12-5) 63-61 a close game that keeps the Cardinal win streak going.

#2  The Cardinal got some great offense on Monday night against Oregon from Kiana Williams 20 points, Cameron Brink 16 points and Lexie Hull with 13 points.

#3 Stanford men: The Cardinal men (13-8) have won five of their last seven games and their last game picked up a 73-66 win over the Utah Utes (9-8) at Maples Pavilion Saturday night.

#4 Four scorers for Stanford finished in double figures Saturday with Spencer Jones leading the way with 17 points and Oscar da Silva with 13 points. Jones doesn’t finish first often but da Silva has to be proud.

#5 Stanford is in Seattle for a visit with the Washington Huskies (4-16) after losing five straight games the Huskies finally got in the win column against cross state rival the Washington Cougars (12-10) 65-63 on Monday night. The tip for tonight’s game at UW is set for 8:00pm, set this game up for us Jerry. 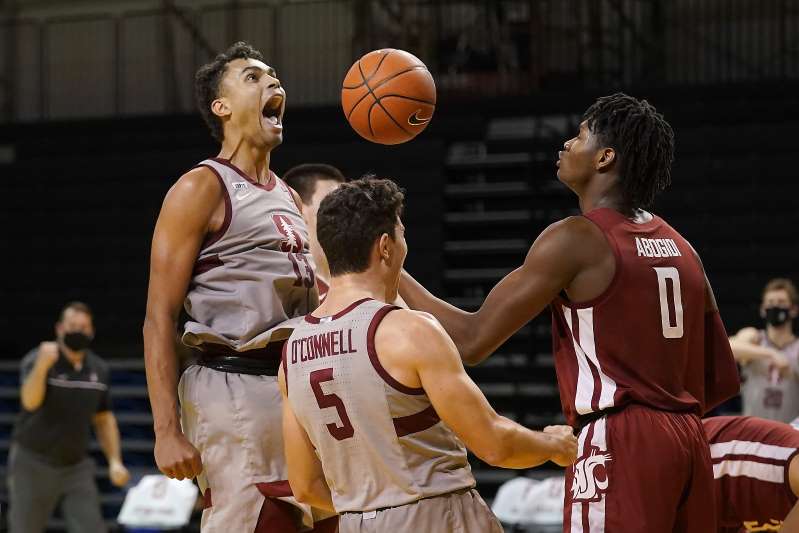 Da Silva scored 27 points and grabbed 13 rebounds, while making 10 of 18 field goals and 6 of 9 at the free throw line. He scored 17 of his points in the second half, and also blocked two shots for the Cardinal (8-3 overall, 4-1 Pac-12) in their third straight win.

Ziaire Williams tallied 16 points and Jaiden Delaire added 10 for Stanford, which outrebounded the Cougars 36-29, and forced 17 turnovers – including 10 steals.

Andrej Jakimovski led the Cougars (9-2, 2-2) with 19 points, including a career-high five 3-pointers, and Isaac Bonton was next for Washington State with 18 points and seven assists. Tony Miller came off the bench and contributed 11 points and eight rebounds for WSU.

The Cardinal held a 41-30 halftime lead, but Washington State surged ahead 55-53 on Efe Abogidi’s 3-pointer with 7:53 remaining. Da Silva countered with a 3 and Stanford never trailed again, finishing the game with an 11-0 run.

Next weekend, the Cardinal hit the road for afternoon games on Thursday at Utah and Colorado on Saturday. 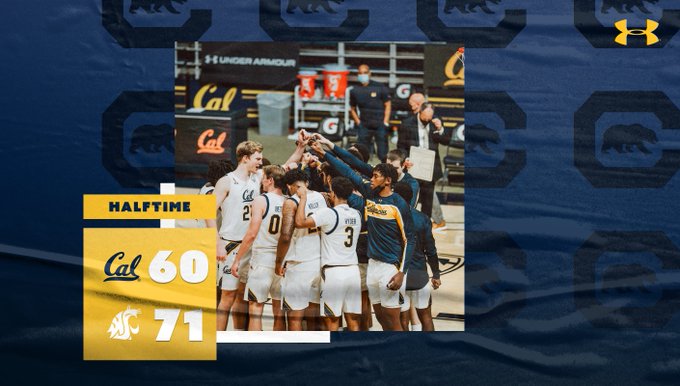 The Cal Bears couldn’t keep up with the Washington State Cougars in the second half of Thu Jan 7, 2021’s game at Haas Pavilion in Berkeley as Cal loses it’s seventh game of the season (image from @CalMBBall)

On the Cal Bears podcast with Michael:

#1 Michael Cal (5-7) had suffered it’s third straight loss and last night the latest to the Washington State Cougars (9-1) one of the winningest teams in the Pac 12.

#2 One player that Cal had a hard time shutting down was Cougars guard Issac Bonton who led with 21 points, he took advantage of having a hot hand and being able to take his shot.

#4 Cal badly misses Matt Bradley they also had three players in double figures but low double figures with Andre Kelly 11 points, Lars Thiemann and Ryan Betley both had ten points but trying to keep up with the Cougars proved too much in the second half as the Cougars were up by eight and won the game by nine.

#5 It’s a Saturday 12 noon lunch time special at Haas Pavilion this Saturday as the Cal Bears hope to turn the page on Thursday night’s loss as they meet the Washington Huskies (1-8) but they’re not in last place the Cal Bears who have won five games are 0-5 in the conference and are in last place in the Pac 12 standings.

Michael Duca does Cal Bears podcasts each Friday at http://www.sportsradioservice.com 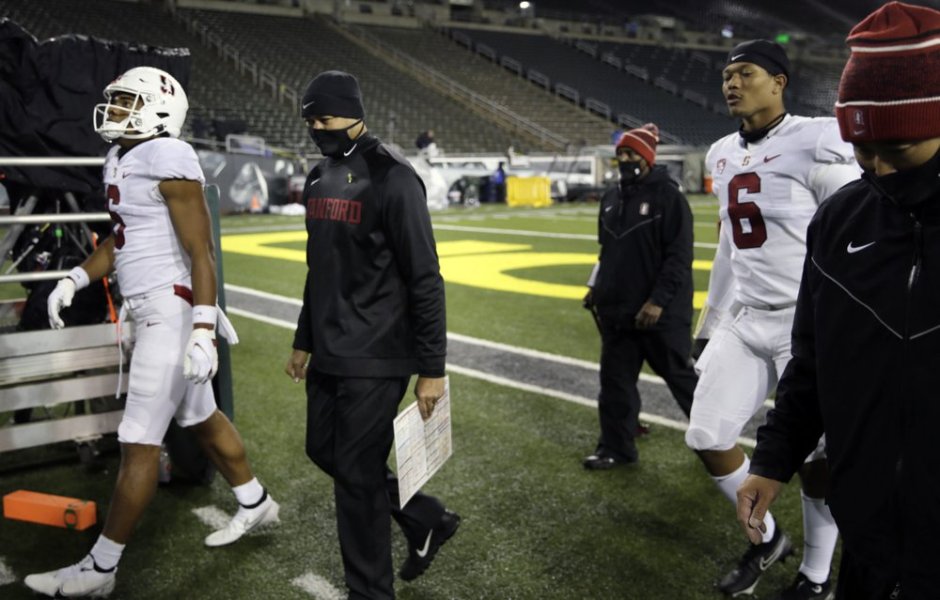 Stanford Cardinal head coach David Shaw runs off the field after a loss to the Oregon Ducks on Sat Nov 7, 2020. The Cardinal prepare for the Washington State Cougars for this Sat Nov 21st at Stanford Stadium (AP file photo)

#1 The Stanford Cardinal (0-2) played a razor close game last Saturday for their home opener losing 35-32 against the Colorado Buffaloes in spite of the Cardinal scoring 16 points in the fourth quarter they still fell short.

#2 Cardinal quarterback Davis Mills had a quarterback keeper, worked hard throwing for 327 yards in 31 for 56 passes.

#3 The Buffaloes (2-0) running back Jarek Broussard carried for 121 yards that helped give Colorado good field position on offense and running back Sam Noyer who carried for only 36 yards and scored two touchdowns helped the offense.

#4 Likewise for the Cardinal they got their scoring mostly on the ground with running back Austin Jones and Mills who carried in for a touchdown each. Jerry do you see Mills and the Cardinal going to the ground game again against Washington State?

#5 Washington State Cougars (1-1) come to Stanford after a tough loss last Saturday 43-29 to the Oregon Ducks the Cougars did win the week before in their opener against the Oregon State Beavers (0-2) 38-28. Jerry set this game up between Wazzu and Stanford for this Saturday.

Join Jerry for the Stanford Cardinal podcasts each Thursday at http://www.sportsradioservice.com 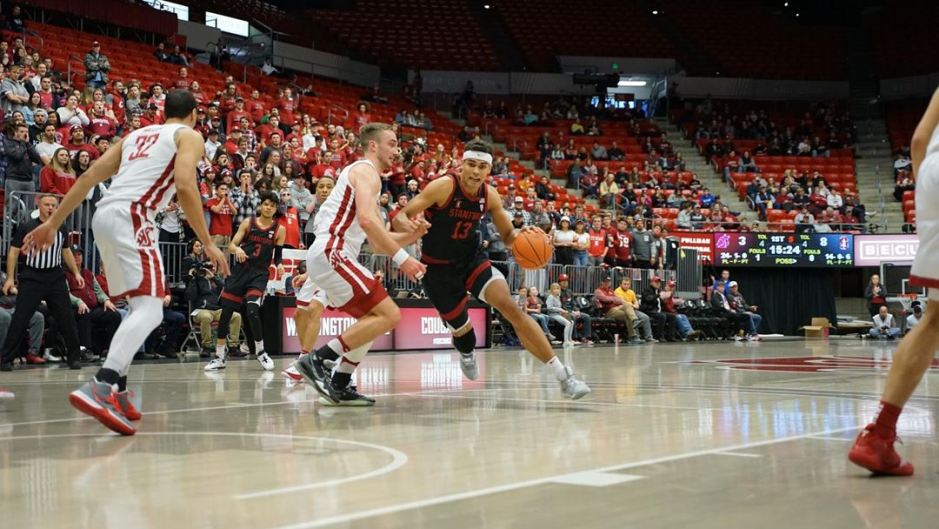 photo from gostanford.com: The Stanford Cardinal’s Oscar da Silva (13) dribbles down court against the University of Washington Cougars on Sunday in Pullman.

Stanford kept its hopes alive for a possible at-large bid for the NCAA tournament on Sunday with a 75-57 verdict over Washington State in Pac-12 men’s basketball at Pullman, Wash.

It was the Cardinal’s second straight win after losing seven of eight games over the last month going into the weekend. Stanford beat Washington 72-64 on Thursday.

Stanford has won eight consecutive games against WSU, and completed their second sweep of the Washington-based schools in three years.

Washington State (14-14, 5-10) lost its fourth game in a row. CJ Elleby led the Cougars with 22 points and 10 rebounds. WSU has been without starting point guard Isaac Bonton in the last three games due to injury, and the offense has suffered – the Cougars have not taken a lead in the last two games.

The Cardinal return home this week for key games against Utah on Wednesday and Colorado on Sunday. 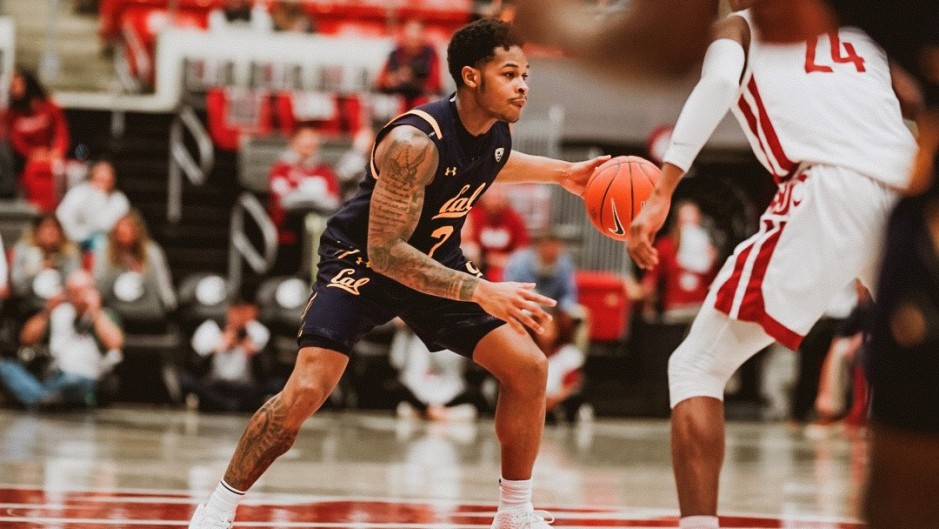 #1 The Bears who are at the bottom of NCAA basketball team in offense didn’t look like a team that’s struggling as they got a road win in Pullman defeating Washington State 66-57.

#2 Paris Austin, Andre Kelly and Matt Bradley combined for 46 points for Cal that contribution helped accelerate the offense and Austin, Kelly and Bradley had some great opportunities to take some great shots.

#3 The win marks the first time they’ve won on the road this season what do the Bears need to do to win games on the road?

#4 Cal head coach Mark Fox said, “For this team, no one gave them a chance to have much success so any time that they have some I want them to enjoy it and understand how they found that success so they can build on it,”

Join Michael will be moving to the San Francisco Giants podcasts next week and Morris Phillips will have Cal Bears podcasts each Monday at http://www.sportsradioservice.com