The Sacramento Kings knew going into Indianapolis they faced an uphill battle with the Indiana Pacers. The upstart Kings handed the Pacers a 111-110 loss in Sacramento last Saturday night and the Indiana team was ready to revenge that loss.

The Pacers are one of the best defensive teams in the NBA and they win by controlling the pace of the game. Indiana had no intention of allowing the Kings to run and gun like they did in Cleveland on Friday night.

Indiana did slow the Kings down and the Pacers won the game 107-97.

Battle of the Tiers

This was a battle of two teams that are in different NBA tiers. The Pacers are a solid Tier Two team (a consistent playoff team) that may be ready to jump into to the lower end of Tier One in the Eastern Conference. The Kings are a Tier Three team (Draft Lottery participants) who are trying to become a lower Tier Two team that battles for the eighth and final playoff spot in the West.

The fact that the Kings split the season series (1-1) with an accomplished team like the Pacers shows the kind of improvement they are experiencing this season.

After posting big team numbers versus the Cavaliers, the Kings team stats dropped dramatically against the defensive-minded Pacers:

A Check of the Book

The Kings played the game without Iman Shumpert who was inactive due to an injury that was categorized as “load management”. Joel Embiid has been kept out games for the same reason a number of times.

The Pacers were still without their star guard Victor Oladipo (sore right knee). Indiana still has no definite date for his return to active status.

With the loss, the Kings record drops to 13-12 for the season and they fall to ninth in the Western Conference. The Pacers improve to 16-10 on the year and are now in sole possession of fourth place in the Eastern Conference.

Up Next
The Kings will wrap up this four-game road trip on Tuesday night in Chicago versus the Bulls. A win would give Sacramento a record of 3-1 on the trip which they would be very happy to finish with for a December road tour of the East.

The Pacers will host the Wizards on Monday. 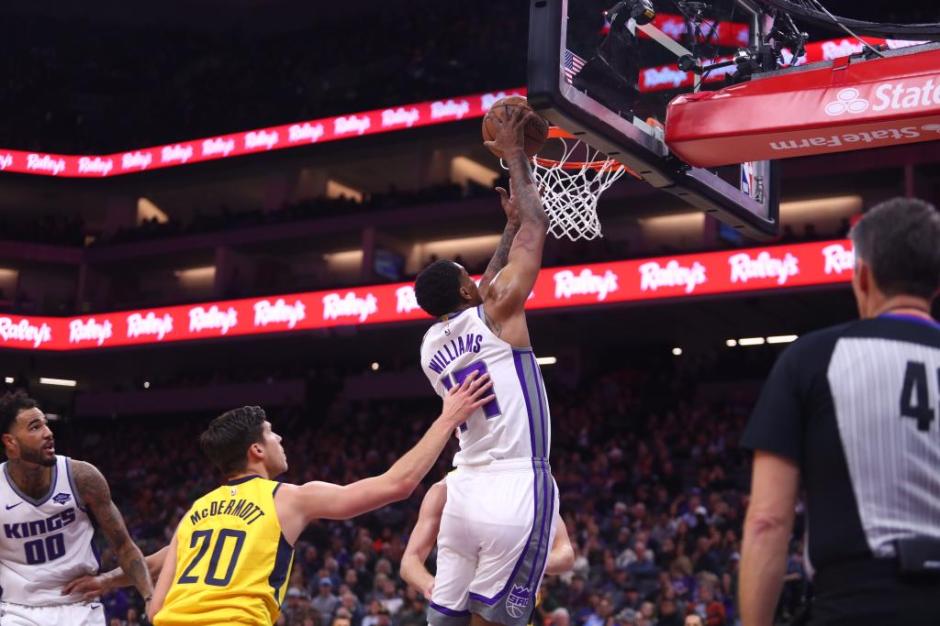 No #NBA fan ever wants to see a game end on a jump ball because the refs are #HORRIBLE at tossing up the ball. That’s how the #SacramentoProud vs #Pacers game ended Saturday night. It was ugly! #SacramentoKings held on to win 111-110 to end a 3-game losing streak. #Last2minutes pic.twitter.com/YzidaGpcqy

SACRAMENTO — The Sacramento Kings broke a three-game losing skid on Saturday night when they defeated the Indiana Pacers 111-110 on their home court. The Kings took the lead with 16.1-seconds to go in the game and then had to battle through one of the ugliest jump ball endings any NBA has ever seen.

Even after the final buzzer, the game’s ending remained in doubt as the officials called for a replay to determine who committed a violation on the jump ball play. The violation was charged to the Pacers’ Darren Collison (yes, the former King) and 1.3 seconds was put back on the clock with the ball being awarded to Sacramento.

The Kings inbounded the ball and held it until the clock expired to seal the victory.

Sacramento did win the battle of the Fast Break Points 18-10, but that is a far cry from a team that has twice this season scored 38 points on the break.

Both teams were missing key players
The Pacers were without Victor Oladipo for a seventh game due to sore right knee. The bad news for Indiana is that there is no timetable for Oladipo’s return. It is not easy to replace 21.4 points per game in your lineup.

The Kings had to play without Marvin Bagley III, who was suffering from back spasms that flared up late in the game versus the Clippers. Sacramento is hoping that he will be available on the upcoming four-game road trip.

Battle of the Bogdanovics
Each team’s leading scorer had the name Bogdanovic on his jersey. Bojan Bogdanovic was the Pacers leading scorer and the high scorer in the game with 27 points in just over 37 minutes on the floor. He hit 10-of-19 shots from the field, including two 3-point baskets. Indiana’s Bogdanovic converted 5-of-6 opportunities from the free throw line.

The Kings’ Bogdan Bogdanovic led his team in scoring with 20 points coming off the bench as the sixth man. Bogdanovic also added six assists and two steals for Sacramento. He put 7-of-12 shots through the hoop with three of those buckets being 3-pointers. Bogdanovic was a perfect 3-for-3 from the charity stripe.

Bogdanovic of #Sactown was very about being the Bogdanovic who’s team got the “W” Sat night. Bogi put up 20 pts & dished out 6 assists vs the #Pacers. #SacramentoKings #SacramentoProud #NBA #ProHoops #HoopsHype pic.twitter.com/5NeTut66Ec

Dave Joerger had a lot to say after the game

Dave Joerger was pleased with the #SacramentoProud hard nosed effort that produced a 111-110 victory over the #Pacers Sat night. He mentioned the effort of Kosta Koufos. In true Joerger fashion, he was taking the win in stride! #SacramentoKings #NBA #ProHoops #HoopsHype pic.twitter.com/n12HbnkZ3O

Coach Joerger had great things to say about #SacramentoKings Center Willie Cauley -Stein. He felt the effort of WCS was another key to the #SacramentoProud win over the #Pacers. #NBA #ProHoops #SacKings pic.twitter.com/n1iG60XLLZ

Joerger point of emphasis
Coach Dave Joerger met the press corps at the entrance to the locker room to tell us he overlooked something in postgame remarks to the media. He wanted to be sure to let us know that in his opinion that Justin Jackson had his best game of the season on Saturday night.

Jackson scored eight points, hauled in three rebounds and dished out two assists in just under 25 minutes of playing time. Jackson also played some tenacious defense for the Kings that will not show up in hard numbers but helped lead them to a win.

Don’t overlook Troy Williams
Troy Williams scored 12 points in 16 on the floor Saturday night. He connected on 4-of-6 shots and was a perfect 3-for-3 from behind the 3-point arc. Williams brought a high charge of energy to court every time he entered the game.

De’Aaron Fox is always ready to talk after a win

Mr. Fox is always ready to speak to the media about the #SacramentoKings. @swipathefox was obviously very happy about #SacramentoProud ending their 3-game losing streak with their win over the #Pacers Sat night. #NBA #ProHoops #SacKings pic.twitter.com/0pw8Rr1K8F

Up Next
The Kings will head out on the road for a four-game trip that will take them to Phoenix, Cleveland, Indianapolis and Chicago. Sacramento will kick off the trip on Tuesday night in Phoenix.

The Pacers will return to Indianapolis and will host the Chicago Bulls on Tuesday evening. 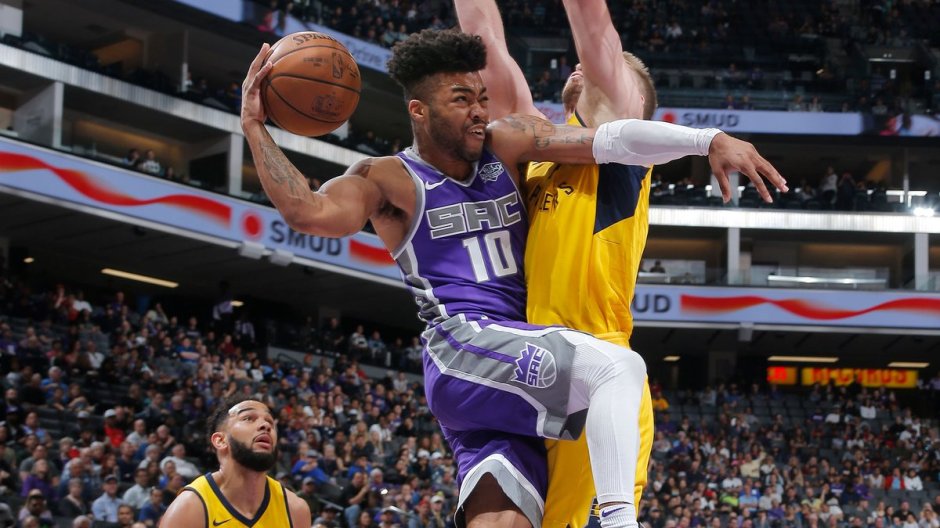 SACRAMENTO- On one of the final home games of the season, the Kings put on quite a show against the playoff bound Indiana Pacers but didn’t have enough down the stretch as they fall to Indiana 106-103. After a sloppy game on Tuesday night against the Mavericks, Sacramento came out tonight, and really seemed like they were playing for their city. Led by the outstanding shooting nights of Buddy Hield and Bogdan Bogdanovic, the Kings were in it for the entirety of the game, but ran into an all-star by the name of Victor Oladipo.

Sacramento looked as good as they have this season in the first half of the ballgame. Willie Cauley-Stien was doing everything out on the floor before heading into the locker-room, including scoring 17 of his 19 points and shooting (9-of-10) from the field. The Kings outscored the Pacers bench 48 to 22 led by a 20 point night from Buddy Hield and Frank Mason doing a little bit of everything.

The second half of the game, the Kings continued to shoot the ball well and played hard, but the all-star, Victor Oladipo, began to show why he has led his team to the 5th-seed in the East. He finished his night with 24 points, five boards, and two assists, including the dagger 3-pointer that sealed the win for Indiana. Even after two crazy made baskets in the final seconds of the game by Hield and Bogdanovic, the Kings luck ran out as they fell 106-103.

Indiana sweeps the season series with the Kings, although it took a hard fought game from the Pacers to seal the win. The Kings will finish their six-game homestand on Saturday as the World Champion Golden State Warriors come to town. Fans were able to get into the game tonight and it really seemed like the Kings were playing for the Sacramento faithful. With only seven games remaining, the Kings will not surpass their win total of 32 from last season, but it seems they are truly playing for what is to come in the future.

Sacramento — Stop me if you have heard this before. “Tough night. Tough game to watch. The guys (Kings) are playing as hard as they can,” Sacramento head coach Dave Joerger after watching his team lose to the Oklahoma City Thunder 122-118. The Kings actually cut the Thunder lead to just two points with 11-seconds to go in the game, but there was not enough time left to finish the potential comeback.

The Kings were down by 12 points with 2-minutes remaining in the game and it felt like things were over at that point. Three 3-point baskets by Tolliver, Collison and Gay along with three Oklahoma City turnovers allowed Sacramento to work their way back into the game. Literally, the Kings waited 60-seconds to long to start their comeback and have enough time to finish it with a positive outcome.

The Kings are playing hard. They are not giving up. They just do not have enough “____________” (fill in the blank with your own opinion because there are so many and no one idea seems to be the right one at this moment). There can be no doubt that something is missing. Be assured the Kings want to fix it. At this point, it must not be that easy to fix or the organization would do it immediately.

No team wants to be in playoff contention – and the Kings are still in ninth place one-game back of Portland even after this loss – with a record of 1-5 on a seven-game homestand. The Kings management, coaching staff and players want to fix whatever is wrong. At this point, they just have not been able to do so successfully.

What will the Kings do next? They have a multitude of options so predicting the next move is very difficult despite whatever anyone is saying. The one thing that is known at this point is the Kings want that eighth spot in the Western Conference Playoffs.

It was a long game on Sunday night

Early in his postgame comments, Kings head coach Dave Joerger talked about what a long game it was on Sunday night. In fact, Joerger said it felt like game went on for hours.

Add in timeouts, arguments by coaches and players plus video reviews and it was a long night for everyone

Stars of the game

Kings – Sacramento closes out the seven-game homestand versus the Indiana Pacers on Wednesday night at the Golden 1 Center. Sacramento is just 1-5 on the current homestand and would like to close it out on a positive note before heading out on a brutal road trip. The Kings will play eight games over 13 days on the road and will not be back in Sacramento until February.

Thunder – Oklahoma City has the second game of a back-to-back set on Monday night in Los Angeles against the Clippers. The Thunder will then head back to the Bay Area on Wednesday night to take on Kevin Durant and the Golden State Warriors in a nationally televised game.