#1Utah State got the 2020 NCAA Tournament first auto wrapped up with a razor close game against San Diego State 59-56.

Join Michelle for March Madness podcasts each Sunday at http://www.sportsradioservice.com SAN JOSE, Calif. — The San Jose State men’s basketball team were on one of television’s biggest platforms on Wednesday night. ESPN2 televised the SJSU vs. #25 Utah State conference contest at the Provident Credit Union Event Center, which was a pretty big deal if you follow the Mountain West.

USU’s Justin Bean went on a 4-0 run to open the scoring, but SJSU’s Brae Ivey ended the Aggies’ run with a fastbreak 3-pointer at 18:16. Bean continued to give the Spartans the fits with back-to-back layups to extend the Aggies’ lead to 8-3 at 16:50. SJSU’s Seneca Knight hit a 3 to make it a 2-point game 38 seconds later. USU’s Sam Merrill quickly responded with a 3 to put the Aggies ahead 11-6. Ivey, however, hit a 3 to put the Spartans back within 2 at 15:10.

The back-and-forth play continued past the 10-minute mark of the first quarter. The Spartans held a 21-19 lead with 7:08 left. The Aggies gave the Spartans fits, but somehow, SJSU made it a close game until the first half came to an end. SJSU’s Christian Anigwe buried a 3 to help the Spartans regain the lead 21-19. Then, SJSU’s Isaiah Nichols to cut the lead to 1 late in the half.

SJSU trailed 36-33 at the break. But the Spartans played one of their best halves in the young season as they shot 40% and hit six 3s.

Check out the first half highlights! pic.twitter.com/I2nSZAmMSQ

USU struck first to open the second half, but SJSU made it a 3-point game, thanks to a Sam Japhet-Mathas layup at 19:12. Sam Merrill was a key Aggies scorer who received help from big men such as Brock Miller, Justin Bean and Alphonso Anderson. SJSU’s Craig LeCesne knocked down a jumper to cut the deficit to 10 with 6:20 left.

SJSU made some key plays like Seneca Knight’s pair of fastbreak free throws along with a fastbreak 3 late in the half. But it was USU who prevailed from Sam Merrill, Justin Bean, Abel Porter and Diogo Brito. The Aggies won 71-59.

The Spartans head to Viejas Arena to take on the San Diego State Aztecs on Sunday, December 8 at 12 pm PST. 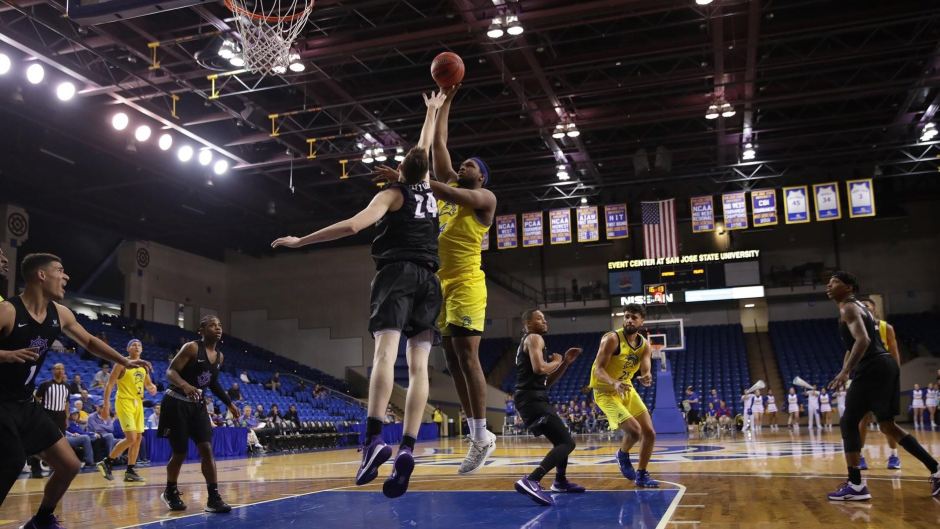 Here’s what you need to know about Wednesday’s game.

NOTES: The Spartans enter conference play coming off a pair of Pac-12 road losses. SJSU is 2-2 at home this season and will be the host in five of its next seven games. Seneca Knight is averaging a team-high 11.8 points per game with Richard Washington just behind at 10.1. The Spartans have shot 40% or better in all three wins and shot under 40% in all five losses.

NOTES: Utah State opened the season with seven straight wins before falling at Saint Mary’s on Friday, 81-73. Sam Merrill, who’s averaging a team-high 17.4 points per game, had 23 points in the loss to the Gaels. The Aggies have been playing without Neemias Queta, who has missed all eight games thus far with an injury.

Stream: espn.com/watch with a cable login

RADIO: Justin Allegri on the call through TuneIn.com and the TuneIn app. Search for “San Jose St. Basketball”.

ZEALOUS ZACH
A constant in the Spartans’ last five games has been the play of reserve guard Zach Chappell. Chappell posted a season-high 17 points, including 3-of-3 shooting from deep, in a loss to Portland State on Nov. 23. Chappell tallied 14 points in a win over Simpson on Nov. 17, going 5-of-7 from the field, including a pair of 3-pointers. The Spartans are shooting just 25.7% from 3 on the season, but Chappell is shooting 42.1% from deep.

SAN JOSE STATE STYMIES GRAMBLING STATE
Grambling State entered the game on Nov. 20 with the nation’s #1 scoring offense, averaging 114 points over its first three games. The Spartans held the Tigers 38 points under their average in an 83-76 win at the Provident Credit Union Event Center. Grambling State was 1-of-10 shooting on three-pointers.

EQUAL EFFORT IN HOME WIN OVER SIMPSON
The Spartans had 13 different players score in an 85-60 win over Simpson on Nov. 17. Zach Chappell came off the bench to score a season-high 14 points, including a pair of 3s. Seneca Knight was 6-of-8 shooting for 15 points. Craig LeCesne added 13 points in 19 minutes. Ralph Agee posted 10 points on 4-of-6 shooting. Harminder Dhaliwal made his collegiate debut and had 2 points and 2 rebounds in 6 minutes.

SAN JOSE STATE STUNS HOFSTRA IN SEASON OPENER
SJSU opened the 2019-20 season with a bang, defeating Hofstra 79-71 on the road on Nov. 6. Hofstra won 27 games last year, while SJSU lost 27 games. In his Spartan debut, JUCO transfer and former Wake Forest guard, Richard Washington, posted a team-high 23 points off the bench on 8-of-13 shooting. Washington scored 12 of his 23 points in the final four minutes, including a stretch of three straight 3s to put the game away. Craig LeCesne had his first career double-double with a career-high 19 points plus 11 rebounds. It was the Spartans’ first win in a road opener since 2010-11 when SJSU topped Eastern Washington, 67-60. The Spartans snapped a 21-game road losing streak dating back to 2017-18. SJSU won on the East Coast for the first time since 2001-02, when the Spartans defeated Fairleigh Dickinson at the BCA Tournament hosted by NC State in Raleigh, N.C.

STAGNANT STARTERS
The Spartans return seven players who started at least one game a season ago. Seneca Knight is the most experienced, as the sophomore started 17 games, including the final 12, of his rookie season. Brae Ivey was just behind Knight, as the former junior college transfer started 16 games last season. Craig LeCesne and Zach Chappell both started 15 games last year. Christian Anigwe, Isaiah Nichols and Trey Smith–a walk-on guard–each started one game.

SIX NEW PLAYERS
Spartans head coach Jean Prioleau will have the help of six newcomers on the roster in 2019-20. The Spartans have three new junior college transfers in Richard Washington (Tallahassee CC), Eduardo Lane (Marshalltown CC) and Ralph Agee (East LA College). Washington started his collegiate career at Wake Forest, where he played eight games as a freshman before an injury caused him to miss the entire 2017-18 season. Another Wake Forest transfer will join the Spartans on the floor this season, as center Samuel Japhet-Mathias will be eligible after a redshirt season last year. The former 4-star recruit appeared in 17 games off the bench at Wake Forest as a freshman in 2016-17. Japhet-Mathias posted 6 points and 4 rebounds at No. 17 Xavier. Prioleau added two freshmen this season in guard Omari Moore and walk-on center Harminder Dhaliwal.

FOUR WINS FOLLOWED BY A TITLE
SJSU hopes to duplicate the success of the 1995-96 squad. SJSU won the Big West Conference tournament and advanced to the NCAA Tournament a year after going 4-23 during the 1994-95 season. The Spartans went 4-27 last season.

SAN JOSE STATE TELEVISION SCHEDULE
SJSU will play 10 games on TV this season, including three at home. SJSU hosts an ESPN networks game this year for the first time since 2010-11, when either ESPN2 or ESPNU will carry the SJSU tip against Utah State on Dec. 4. SJSU will also be on ESPN2 or ESPNU when visiting Utah State on Feb. 26. SJSU will have four non-conference games on TV, all against Pac-12 foes. The Spartans will be on CBS Sports Network when hosting Stanford at the Provident Credit Union Event Center on Dec. 14. SJSU will battle both UCLA and Arizona on Pac-12 Networks and meet Oregon State on FS1 for a neutral site game in Las Vegas. SJSU will also have four Mountain West contests on AT&T SportsNet this season — Jan. 15 at UNLV, Jan. 21 at New Mexico, Feb. 8 at Nevada and Feb. 29 vs. UNLV.

#1 Michelle, we wanted to lead off asking you about your old alumnus, University of New Mexico, Lobos (2-3) struggled in the second quarter of their game against the San Jose State Spartans (3-2) the Lobos defense couldn’t stop the Spartans run and San Jose ended up getting 20 points, which gave the Lobos too much of a deficit to come back from.

#2 The Michigan Wolverines (4-1) are ranked #19 and they played Iowa (4-1), who are ranked #14 and hung on to win 10-3. Despite their rank, Michigan should be a higher ranked team and were expected to come out of the shoot to start the season.