Yes, the FIFA Women’s World Cup champion US women’s soccer team should get equal pay like their male counterparts, but what they have to do is for their attorneys to re-negotiate their contracts. However, when it comes to this recent international World Cup, the ruling organization is FIFA (International Federation of Association Football) and FIFA has been a very corrupt organization for a long time.

The US women’s team that just won have a great argument to make, especially here in the US, to get paid as much as the US men’s team. This however, will be played out in a legal arena as attorneys are already involved. Today, this female championship team today has great leverage and enjoys tremendous popularity in this country. I cannot see why they cannot get equal pay.

When it comes to fútbol (soccer) in World Cup competition, the male teams always show higher ratings than their female counterparts. That is the whole world. In some countries where soccer is king, women still have to walk behind men, they are prohibited to get an education, and in some countries, they are not even allowed to drive.

But we are different that the rest of the world, so my prediction is that the US women’s team have an excellent opportunity to finally have equal pay and this is their best time for that argument.

Regardless of whether or not they get equal pay, we must congratulate them for a great World Cup. New York will welcome them with a ticker tape parade this Wednesday.

On Headline Sports with Amaury Pi Gonzalez for Tony Renteria:

#1 The US Women’s soccer team will be playing the Netherlands Women’s team on Sunday. The US Team has had a great ride to get into the finals the last game they played they defeated the English Women’s team 2-1.

#2 Megan Rapinoe has been the face of the team politically. She said she won’t go to the White House and would put her hand over her heart during the anthem, and accepted an invitation from NY Rep Alexandria Ocasio-Cortez to meet at the House of Representatives after the finals. How much of a influence was Rapinoe for the women’s team during this World Cup?

#3 The LA Angels’ Tommy LaStella fouled a pitch off his right leg breaking his fibula and will be out for six weeks of action and will miss the All-Star break. This came right after the Angels lost pitcher Tyler Skaggs, who died in his sleep on Monday.

#4 The Oakland A’s are coming on after taking three of four from the Angels and winning the first game against the Minnesota Twins 8-6 — one of baseball’s best teams on Tuesday night.

#5 With the departures of Jordan Bell, Kevin Durant and Andre Iguodala from the Golden State Warriors, are the Warriors now considered just an average NBA team?

Tony does Headline Sports each week at http://www.sportsradioservice.com

#1 Critics says that there is no market for DeMarcus Cousins. What would you say the reason are as someone who covered him while he was at Golden State? Too many injuries, didn’t fulfill what the Warriors expected out him, too much baggage.

#2 Would the Lakers consider picking up Cousins? Cousins is reportedly watching if Kawhi Leonard decides to sign with the Lakers and if so would Cousins want to join Leonard in the Southland?

#3 You were there, how impressive were the Earthquakes when they shutout the LA Galaxy 3-0 at Stanford Stadium last Saturday?

#4 Quakes head coach Matias Almeyda said the game was a spectacle and the team is on the right path and has improved.

#5 The US Women’s team got a 2-1 win over England to advance to the Finals, which will be played on Sunday. Talk about how nervous you are for this upcoming match that could win it all.

London Marq does Headline Sports for http://www.sportsradioservice.com each Wednesday 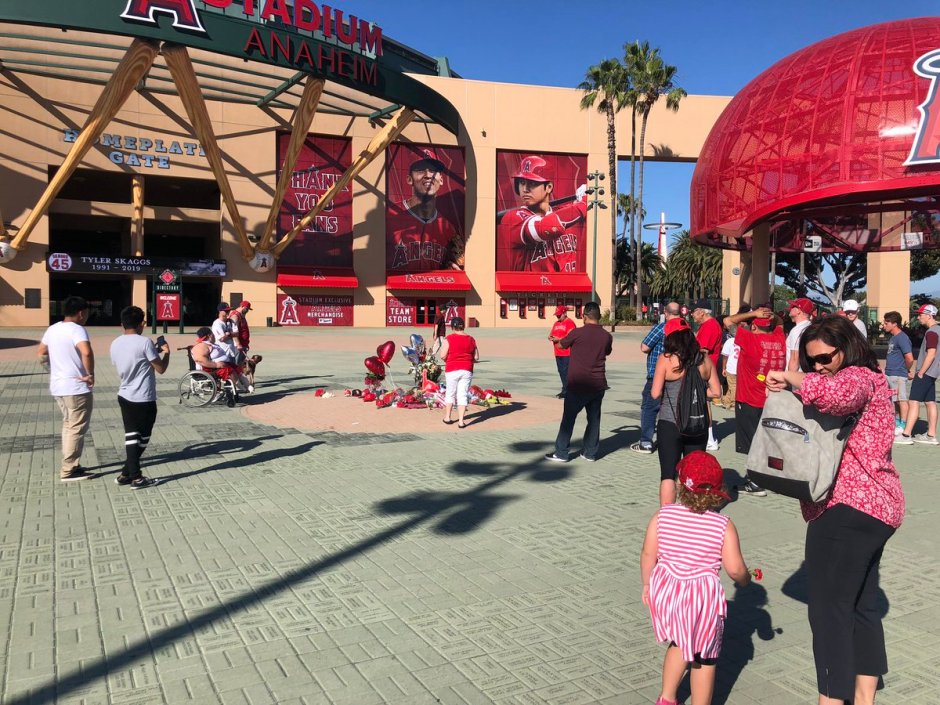 On Headline Sports with Barbara Mason:

#1 How shocked is the baseball world after finding out about the death of 27-year-old Tyler Skaggs, who was found dead in his Texas hotel room during the Los Angeles Angels’ trip to face the Texas Rangers. The game was canceled.

#2 Was the loss at Wimbledon for Venus Williams to 15-year-old Cori “Coco” Gauff more a pass the baton moment, defeating Williams in the first round of the tournament or was it a match for Williams trying to figure the younger player out?

#3 Megan Rapinoe is no doubt the face of the US Women’s Soccer team. She was confident, showed leadership, she took on Trump and the White House. How important is Rapinoe to women’s sports and how she represents women in the US World Cup?

#4 How realistic is it that San Francisco Giants pitcher Madison Bumgarner will be traded sooner or later? The New York Yankees are chomping at the bit at getting a shot at getting Bumgarner.

#5 The San Jose Sharks dealt their captain Joe Pavelski to the Dallas Stars. Did the concussion that Pavelski sustained in the playoffs against the Vegas Golden Knights play a role in the Sharks parting ways with Pavelski or was it something else?

Barbara Mason does Headline Sports each Tuesday at http://www.sportsradioservice.com 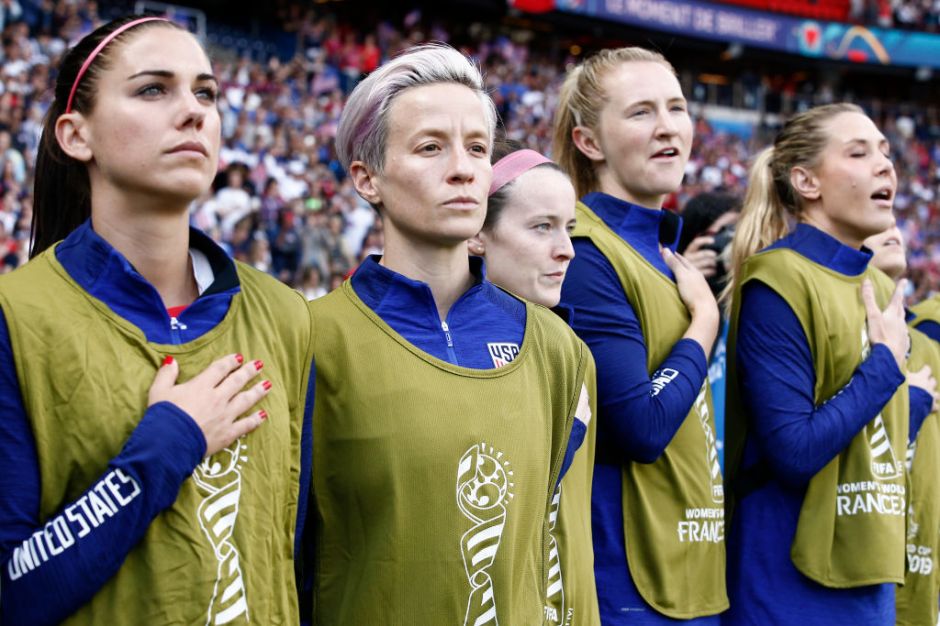 photo from time.com: Megan Rapinoe #15 of USA (center) and her teammates are standing for the national anthem during the 2019 FIFA Women’s World Cup France Group F match between USA and Chile at Parc des Princes on June 16, 2019 in Paris, France.

On the Headline Sports podcast with London:

#1 The war of tweets and words has initially begun at the US World Women’s soccer matches between President Trump and US Women’s soccer star Megan Rapinoe. Rapinoe originally took a knee during national anthems during the 2016 games. Now she stands without putting her hand over her heart unlike the rest of the teammates. Rapinoe said she will not visit the White House if the US team wins the championship. Trump says by her not doing it, Rapinoe is inappropriate and said she should win first before she talks.

#2 Rapinoe said that the reason she is protesting is because of unjustified treatment by police and law enforcement officials towards minorities and people of color. Rapinoe told American Soccer Now, “Being a gay American, I know what it means to look at the flag and not have it protect all of your liberties.” With the World Cup going on, this will most likely not be the last of the stand off between Trump and Rapinoe.

#3 We asked London about the World Cup putting up signs on the scoreboard indicating that there will game delays for replay reviews. This lends to fans following the games and thinking that their team has the game in hand, but they’ll wait until a replay review has been called for.

#4 After going five straight games without a loss the San Jose Earthquakes lost to LAFC who took it to the Quakes with a 3-1 win in Los Angeles last week on Thursday. For LA, Adama Diomande scored twice, which led LAFC to the two-goal win.

#5 The Quakes continue their road trip tonight against Houston at Avaya Stadium in San Jose as they face the Dynamo. The Dynamo are in fifth place in the MLS West at 7-3-4. The Dynamo are 2-1-3 in their last six games and have lost their last two games to Minnesota and Portland.

London Marq covers the San Jose Earthquakes and does Headline Sports podcasting each week at http://www.sportsradioservice.com

On the Headlines Sports podcast with London:

#1 Abby Dahlkemper said that it’s in the USA women’s soccer DNA to “win and do really well.” The women’s US team, who are the defending champs, are preparing for their game against Sweden. Both teams have clinched for berths in the top 16.

#2 World Cup soccer Brazil team got a 1-0 victory over Italy in Valenciennes, France, the win advanced Brazil for the sixth time to the knockout rounds. Brazil got their goal from Marta, who is playing in her fifth World Cup at 33 years old.

#3 The US Men’s team gets the gold with a win over Guyana. The US’s Tyler Boyd scored two goals as the US got a convincing 4-0 win over the Guyana team on Tuesday night in St. Paul, Minnesota for the CONCACAF Gold Cup.

#4 There was relief when former XFL player Rod Smart, who was famously known for his football jersey when he played for the Las Vegas Outlaws in 2001 that read “He Hate Me” came up missing for six days. His family expressed concern. The Smart family are happy to announce that Smart was found safe and sound and no reason given for his absence. Smart played a season with Philadelphia and four with Carolina in the NFL.

#5 The San Jose Earthquakes are on a good run. They have gone undefeated in their last four games, and if you include their US Open Cup run against Sacramento, five undefeated games. The Quakes play LAFC on Thursday night to try to keep it going.

London Marq does Headline Sports podcasting each Wednesday at http://www.sportsradioservice.com