On New Year’s Eve at the Golden 1 Center, something happened that has not really been heard in the new building. In the third quarter, fans began booing their hometown Kings. They were frustrated with their play and the fact that the Kings were trailing the Grizzlies 90-63.

When the third quarter ended, a large number of fans headed for their cars in order to beat crowds coming into downtown and to get to their New Year’s parties early. Those who left had no hope that their Kings would mount a comeback in the final period. They were right.

Sacramento held the lead only twice in the contest. They took the first lead of the game on a Bogdan Bogdanovic 26-foot three-point basket for the first score of the game. After the Grizzlies tied the game on a Tyreke Evans 3-pointer – the Kings took a 5-3 lead when George Hill scored on a fast break. That would be the last time the home team would hold the lead in the game.

The Grizzlies lead was 14-points at the end of the first quarter and 18 at the half. Memphis built their lead to as many as 32-points in the third period and to a game-high 33-points in the fourth quarter.

After losing to the Warriors 141-128 on Saturday night, the Grizzlies should have been tired and ripe for the pickings in the second game of a back-to-back set on the road. Instead, they seemed pumped up by their performance and used that energy against the Kings for the entire 48-minutes on Sunday afternoon.

#Kings Head Coach Dave Joerger talks about breaking down a game like the 114-96 loss to Memphis in order to get better as a team. He also talked about how Tyreke Evans played versus his #SacKings. ##NBA #KFBK #KAHISports #USATodaySports #FSR #Hoops #memgrizz pic.twitter.com/196PpsQqkz

The Kings first game of the new year will be versus the Charlotte Hornets at the Golden 1 Center on Tuesday, January 2. The Hornets are coming in off a 106-98 New Year’s Eve loss to the Clippers. This will be the first meeting of the season between the two teams.

The Grizzlies will wrap up their West Coast swing with a game in Los Angeles versus the Clippers on Tuesday at Staples Center. 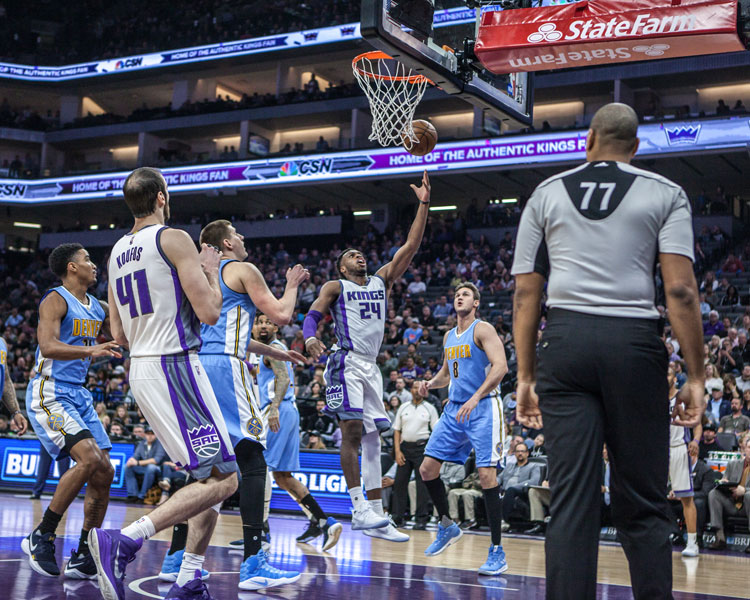 #Nuggets downed #SacKings 105-92 tonight. #Kings have now lost 8 in a row. HC Joerger says his team is not worried. They're learning #NBA pic.twitter.com/LndPzHryLq

This was the final game of the year between the Nuggets and Kings. The season series ends 2-2. Each team won a game on its homecourt and lost a game on the road.

Where the teams stand after the game

Weird stat of the night

The Nuggets committed nine turnovers in the game but the Kings were able to score just four points off those turnovers. Compare that to the Kings who committed 13 turnovers that resulted in 22 points for Denver.

The Kings will be back on their homecourt on Monday night when they host the Orlando Magic. The Magic are also a budding “Draft Lottery” team.

The Nuggets will also be back in action on Monday when they host the Los Angeles Lakers in the Mile High City.

“The Woj” of The Vertical was the first to send the rumors of the possible trade up the wires earlier on Sunday. Most of the reaction to the rumor was negative based on Vlade Divac’s statements to ESPN last week on the Kings intentions to sign Cousins to a long-term extension and the fact that Sacramento is still in contention for the eighth and final playoff spot in the Western Conference.

As the day progressed and the All-Star Game got underway, the rumors of a Cousins trade continued to heat up. Where it had just been New Orleans as a possible destination, there then became rumors that other teams were vying for Cousins. As time passed, the story began “to grow legs”.

Adding fuel to the fire was the limited amount of playing time that Cousins saw in the All-Star Game. Cousins played just two minutes and scored three points.

It would appear that the Kings have moved into a rebuilding mode. If they hold unto the number 10 or better lottery draft pick, the Kings will retain that selection rather than having to send that pick to the Chicago Bulls. The upcoming draft has been deemed one of the most star-studded in years. The trade would indicate that the Kings want to participate in the draft process.

Do not forget that Sacramento hedged their bets by sending Marquese Chriss to Phoenix for the rights to shooting guard Bogdan Bogdanovic who is currently playing in Turkey. He is seen as a potential impact player in the NBA.

This certainly marks a major change in philosophy for the Kings. Up until now, it has been “all Boogie – all the time”. Now, it’s a clean slate. What kind of team do the Kings want to build? Vivek Ranadive was a minority owner of the Golden State Warriors and loves their style of play. Who doesn’t love the Warriors style?

All change is crisis. So, the Kings are in the middle of another major crisis. They have to justify to their long-suffering fans why they did an about-face and dropped out of the playoff race while jettisoning their only legitimate All-Star player.

OAKLAND — Western Conference Player of the Month for November Stephen Curry continued his steady play into December, scoring 19 points and handing out a season-high 11 assists leading the Golden State Warriors to their 11th consecutive victory with a 112-85 win over the New Orleans Pelicans Thursday night in front of 19,596 fans at Oracle Arena.

“We are off to a great start,” Curry said. “We have a laser focus and we never get too head of ourselves.”

Golden State’s 11-game win streak matches their longest in franchise history, dating back to the 1971-72 season. Their NBA-best 16-2 mark this season is also their best start in the team history, while improving to 7-1 at home.

After starting 1-of-8 shooting, Klay Thompson finished with 23 points on 8-of-16 from the floor.

Harrison Barnes added 17 points and 10 rebounds, while Draymond Green had 14 points and matched his career-high with 14 rebounds.

Marreese Speights continues to provide scoring off the bench for the Warriors, finishing with 12 points. In his last five games, Speights is averaging 14.6 points per game, 6.6 rebounds per game, and shooting 42 percent from the field.

After trailing 30-22 early in the second quarter, Golden State went on a 20-4 run to close out the first half. Golden State led as much as 22 points over a New Orleans team that couldn’t get it going tonight after coming off a 112-104 win over the Oklahoma City Thunder Tuesday night.

Anthony Davis scored 30 points and 15 rebounds, Jrue Holiday finished with 12 points and eight assists, and Tyreke Evans chipped in 11 points for New Orleans, who fall to 8-9 this season.

Omer Asik finished with nine points, and 15 rebounds for the Pelicans, who also committed 17 turnovers compared to nine by the Warriors.

Golden State looks to set a new franchise mark Saturday when the team heads to the Windy City to take on the Chicago Bulls.

Curry shot 10-for-22 from the field, but 2-for-9 from 3-point range. Andrew Bogut scored 10 points, 15 rebounds and five blocks in 34 minutes, and Jordan Crawford added 10 points off the bench for Golden State (26-16), who picked up their seventh straight victory over New Orleans.

Klay Thompson had a tough night from the field, scoring eight points on 3-for-14 shooting, 2-for-7 shooting from 3-point range.

Anthony Davis led all scorers with 31 points and pulled down 17 rebounds, his seventh straight game with at least 20-plus points.

Tyreke Evans finished with 14 points, after missing the previous three games with a left ankle sprain for the Pelicans (15-24), who have lost seven straight games. Al-Farouq Aminu scored 12 points, but New Orleans finished shooting 38.6 percent (32 of 83), including 2-for-11 from 3-point range. The Warriors shot 44 percent (37 of 84), hitting 6 of 22 from deep.

Golden State needed this victory in the worse way, as they host the Eastern Conference-leading Indiana Pacers Monday at Oracle Arena and didn’t want to face a tough Pacers team on a three-game losing streak.