#1 Matt, with Evander Kane signing on with the Edmonton Oilers this week it didn’t take long for someone in the Canadian media to take a shot at him. TSN radio’s Jeff O’Neill said on TSN 1050 that Kane should repair his relationship with his daughter. Kane responded wishing O’Neill played in the NHL and asking what does O’Neill know about his relationship with his daughter?

#2 The Seattle Kraken ran into some rough weather their game against the New York Islanders has been postponed due to emergency winter storm warnings and rescheduled for Wed Feb 2 at UBS Arena in Elmont. The Kraken are scheduled for a match with the New York Rangers for Sun Jan 30th Matt any word if they’ll play that game?

#3 Matt, talk about the Colorado Avalanche’s Nathan MacKinnon who was hit by the Boston Bruins Taylor Hall during Wednesday’s game in the first period at 2:22 the hit put MacKinnon face down on the ice and he was listed with a concussion and facial fracture.

#4 The New York Rangers Adam Fox will not play in the All Star game due to an upper body injury he will miss three games on Fri vs. Minnesota, Sun vs. Seattle, and Tue vs. Florida. Fox got pinned against the boards by the Columbus Blue Jackets Vladislav Gavrikov in the third period of Thursday’s game.

#5 NHL All Star game will be played on Sat Feb 5th at the T Mobile Center in Las Vegas. This will mark the first time in Vegas Golden Knights history that the Knights organization will host the mid-winter classic. The All Star game skills contest will be on Fri Feb 4th to start things off.

Join Matt Harrington for the NHL podcasts each Saturday night at http://www.sportsradioservice.com 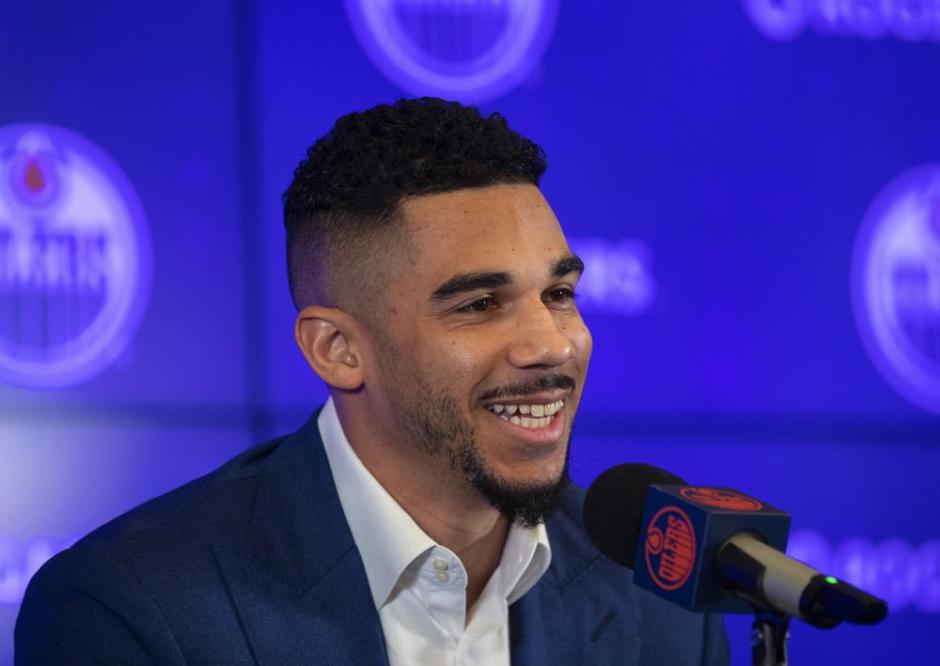 Newest Edmonton Oiler Evander Kane who met with the Edmonton media on Fri Jan 28, 2022 at Rogers Place in Edmonton for an introduction presser will make his Oilers debut against the Montreal Canadiens on Sat Jan 29, 2022 at the Belle Center in Montreal (photo by Canadian Press via AP)

#1 Len, how much of clean slate is it for former San Jose Shark Evander Kane to correct some of the mistakes or misunderstandings that he went through while he played in San Jose now that he’s with the Edmonton Oilers.

#2 TSN 1050 Toronto talk show host Jeff O’Neill said that Kane should fix his relationship with his daughter, O’Neill on the air called Kane an idiot, jerk and a goof. Kane responded by saying that he wished that O’Neill played in the NHL right now and he didn’t know anything about his relationship between Kane and his daughter.

#3 Kane said during Friday’s press conference at the Rogers Centre in Edmonton for fans, teammates, and the Oilers front office to be patient and “see what I bring to the table”

#4 The San Jose Sharks (22-19-2) who surprised the Washington Capitals (23-12-9) on Thursday night with a 4-1 win the Sharks face off against a very good Florida Panthers (30-9-5) team at FLA Live Arena in Sunrise this afternoon talk a little about today’s contest?

#5 The Sharks and Carolina Hurricanes (29-9-2) share something in common they both will be playing back to back games this Saturday and Sunday the Sharks coming from Florida tonight and the Hurricanes play the New Jersey Devils tonight. The Sharks and Hurricanes face off at 2:00 pm PST at PNC Arena Sunday.