#1 Tuesday was a busy day at the San Francisco offices at the Marie DeBartolo Complex in Santa Clara as the 49ers (3-4) have made some roster moves as follows, acquired defenseman Charles Omenihu, linebacker Tyrell Williams released, kicker Joey Slye wavied, and safety Kai Nacua has been moved to the practice squad.

#2 Dave, former San Francisco 49ers quarterback and legend Joe Montana said he would have taken the New England Patriots quarterback Mac Jones over 49ers back up Trey Lance. Jones so far this season is piling up on the yards at 1,997, nine touchdowns, six interceptions, for Lance 354 yards, three touchdowns, and an interception this season. Where do you stand on Montana’s choice of quarterbacks?

#3 Dave after losing four straight and going into Chicago with a 33-22 win has 49ers quarterback Jimmy Garoppolo turned a corner, critics still are calling for Lance to be the starting quarterback.

Join David for the 49ers podcasts each Wednesday at http://www.sportsradioservice.com 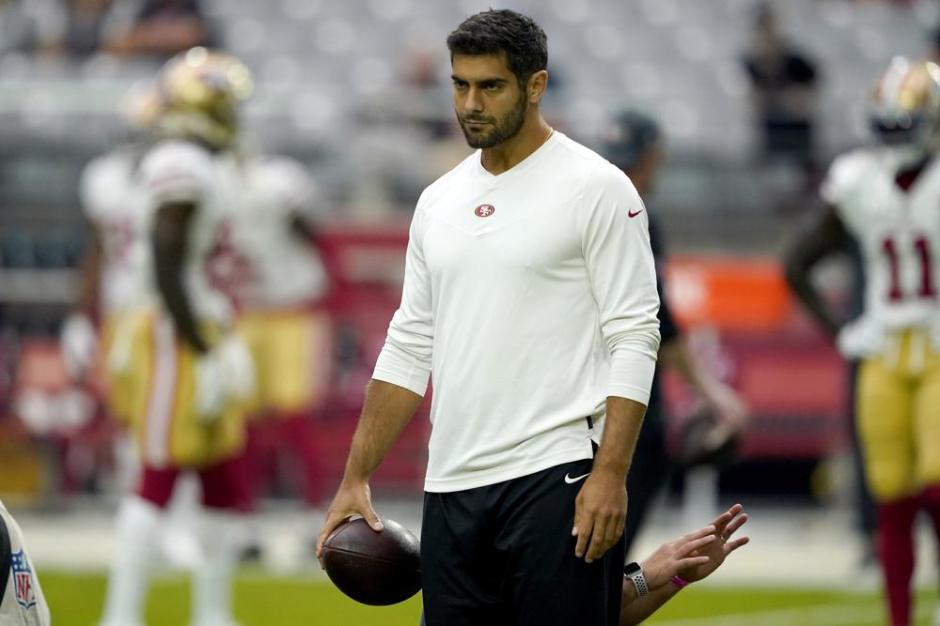 San Francisco 49er quarterback Jimmy Garoppolo who did not play in the 49ers last game on Sun Oct 10, 2021 in Glendale against the Arizona Cardinals is seen on the field at State Farm Stadium before the game (AP News photo)

#1 The 49ers who are on a bye week this Sunday and have lost three in a row and three games out of first place in the NFC West and have two injured quarterbacks have a lot to recover from going into next week’s home game against the Indianapolis Colts.

#2 On quarterbacks injuries Jimmy Garoppolo left calf soreness and Trey Lance twisted left knee will they get enough recovery time to get a start for next week’s game against the Colts.

#3 Garoppolo who missed week 5 and ranks 18th in passing in the NFL is he going to be commodity of sorts as the 49ers are rumored to be interested in shopping him or will they hang onto him because Lance isn’t ready yet?

#4 Lance who carried during the last game against in Arizona and got injured running the ball and head coach Kyle Shanahan and said one of many times that Lance isn’t quite ready yet to step into the starting role. Lance was 15-29, 192 yards, carried for 92 yards and threw for one touchdown.

#5 The 49ers are 17th place in total defense and place 11th in rushing and it’s unlikely that they will not not move up the scale to Super Bowl caliber numbers over their next 12 games anytime soon as the 49ers injuries of DeForest Buckner and Raheem Mostert are just too hard to replace at this juncture.

Join J Hawkes for the 49ers podcasts each Sunday at http://www.sportsradioservice.com

San Francisco 49ers quarterback Trey Lance and head coach Kyle Shanahan converse on the game plan during the second half against the Seattle Seahawks on Sun Oct 3, 2021 at Levi Stadium in Santa Clara. Lance will start against the Arizona Cardinals Sun Oct 10, 2021 at State Farm Stadium in Glendale. (photo from AP News)

#1 Joe, San Francisco 49ers (2-2) quarterback Jimmy Garoppolo rested on Thursday sitting out practice as the 49ers get ready to face the Arizona Cardinals (4-0) at State Farm Stadium in Glendale. According to head coach Kyle Shanahan Garoppolo will rest for today’s game and Trey Lance will get the start .

#2 Garoppolo’s practice sessions if any has been very limited and Garoppolo has said that his calf injury still hurts to the point where he can’t push off and throw a pass.

#4 Lance has looked good in practice and the few snaps he’s taken in the regular season how much of a test will this be with Lance being under center and starting the game against the Cardinals today?

#5 The Cardinals as a team that are a big test in of itself as they are 4-0 and quarterback Kyle Murray has been leaving defenses flat footed when he runs the keeper. Murray in Sunday’s last game against the Los Angeles Rams threw for 268 yards, two touchdowns and wasn’t intercepted and won the game convincingly 37-20. Missing some of the players to injuries will the 49ers be headed into a hornet’s nest today?

Joe Hawkes does the 49ers podcasts each Sunday at http://www.sportsradioservice.com

#1 On Monday during practice the San Francisco 49ers quarterback Trey Lance had a splint on his right index finger and just some six days before the week 1 opener at Ford Field in Detroit this Sun Sep 12th Lance still can’t practice and throw a football.

#3 The 49ers will be starting Jimmy Garoppolo as Garoppolo and Lance are the only quarterbacks on the roster so with Lance’s fractured finger injury the Niners have promoted quarterback Nate Sudfeld from the practice squad roster.

Join David Zizmor does the San Francisco 49ers podcasts each Wednesday at http://www.sportsradioservice.com 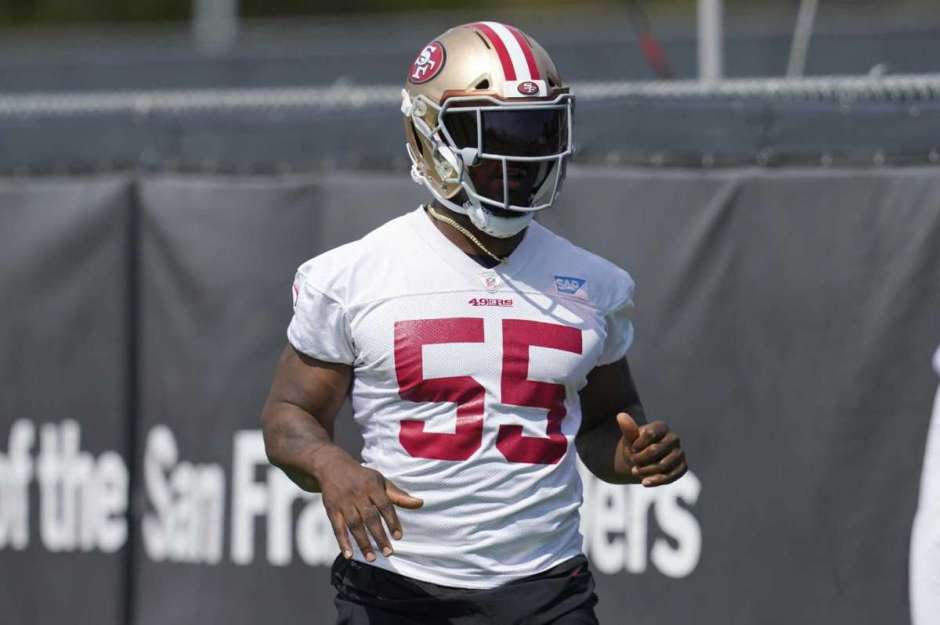 #1 When at a recent practice about who will start Sep 12th’s opener in Detroit San Francisco 49ers head coach Kyle Shanahan told the media scrum standing about “I bet you guys could figure it out” Joe just wanted to get your take on Shanahan’s answer?

#2 It’s been 357 days since defensive end Nick Bosa had torn his ACL and cartilage in his left knee. Bosa sat out all three pre season games how concerned is Shanahan about Bosa returning to top playing shape to start the season?

#3 Bosa has only been involved in 10 snaps of the closed to the media for full practices for 11 on 11 sessions. It’s hard to judge in that small amount of time but how Bosa will do but Shanahan said he’s expecting a lot from Bosa.

#4 49ers general manager John Lynch said that pass rusher Dee Ford will be used cautiously, Ford who had a third serious back injury and missed 15 games last season. Lynch said Ford has looked well in practices and drills. Ford didn’t play in any pre season games and his expected to take 15-20 snaps during games in pass rushing plays.

#5 Jaquiski Tartt looks as he will be the starting strong safety. Tartt missed nine months of last season due to surgery for turf toe. Tartt reportedly has looked like he hasn’t missed a step since returning to practice Aug 25th. Tartt participated on two practices during the week and against the Raiders last Sunday was in 29 snaps in the last pre season game.

Trey Lance (5) and Jimmy Garoppolo (10) tune up during quarterback drills at the San Francisco 49ers camp in Santa Clara. Will there be a quarterback controversy? 49ers head coach says the job of starter belongs to Garoppolo to start the season. (photo from 49erswebzone.com)

#1 Dee Ford said he’s excited to be back in practice after missing the last 15 games of last season due to a back injury. Ford was offsides on two snaps but was happy to get that old feel again.

#2 Javon Kinlaw made his first appearance in team drills on Monday he had suffered from a swelled up knee from last week. Kinlaw said after practice that the knee feel excellent.

#3 After drills on Monday head coach Kyle Shanahan said that Jimmy Garoppolo remains the team’s starting quarterback and Trey Lance is his back up. Shanahan said there was nothing that Lance did in practice to start talking differently with Jimmy.

Join David for all the latest on the 49ers podcasts Wednesdays at http://www.sportsradioservice.com

#2 Staley spent three seasons on the line protecting Garoppolo from getting hit on the blind side, he was there to see Garoppolo successes and his struggles and says that whoever wins the job at quarterback will work hard to get the number one position.

#3 Staley also said that the Garoppolo is 24-9 including post season and the 49ers are 7-26 without him so despite all the energy behind Lance Garoppolo still brings in that valuable experience.

Join David each week for the 49ers podcasts heard Wednesdays at http://www.sportsradioservice.com

#2 Kittle also says that Lance is a good quarterback that he’s a great athlete and he’s someone that wants to learn everyday. A video has surfaced showing Lance throwing to veteran receiver Mohamed Sanu.

#3 The talk has been will Lance take over at quarterback in place of starter Jimmy Garoppolo it’s just a matter of how things work out and how things look during the first few weeks of the season.

Join David for the 49ers podcast each Wednesday at http://www.sportsadioservice.com

Former San Francisco 49ers quarterback Nick Mullens prepares to throw against the Dallas Cowboys on Sun Dec 20, 2020 in Arlington TX. Mullens will join the Philadelphia Eagles and is expected to be their third string quarterback. (AP News file photo)

On the 49ers David Zizmor podcast:

#1 Former San Francisco 49ers quarterback Nick Mullens has signed on with the Philadelphia Eagles Mullens seeing an opportunity especially when the 49ers has signed on top draft pick Trey Lance.

#2 On Lance he’s noted for his speed and his ability to carry if needed lots of talk that Lance is talented and highly touted.

#3 I know we asked you about Lance last week but there’s been a lot talk and written about Lance being the starting quarterback can you see that happening.

Join David for the 49ers podcasts each Wednesday at http://www.sportsradioservice.com

Quarterback Trey Lance selected No.3 in the NFL draft by the San Francisco 49ers hold up his jersey on Thu Apr 29, 2021 in Cleveland (AP News photo)

#1 The 49ers have selected No.3 quarterback from North Dakota Trey Lance it certainly was an exciting night for Lance at the NFL draft on Thursday night

#2 How do you see Lance fitting in the NFL and talk a little about his style of passing and running as a keeper.

#3 Is there a possibility that Lance could beat out starting quarterback Jimmy Garoppolo for the starting job. Garoppolo has suffered numerous injuries outside of that one Super Bowl season he had.