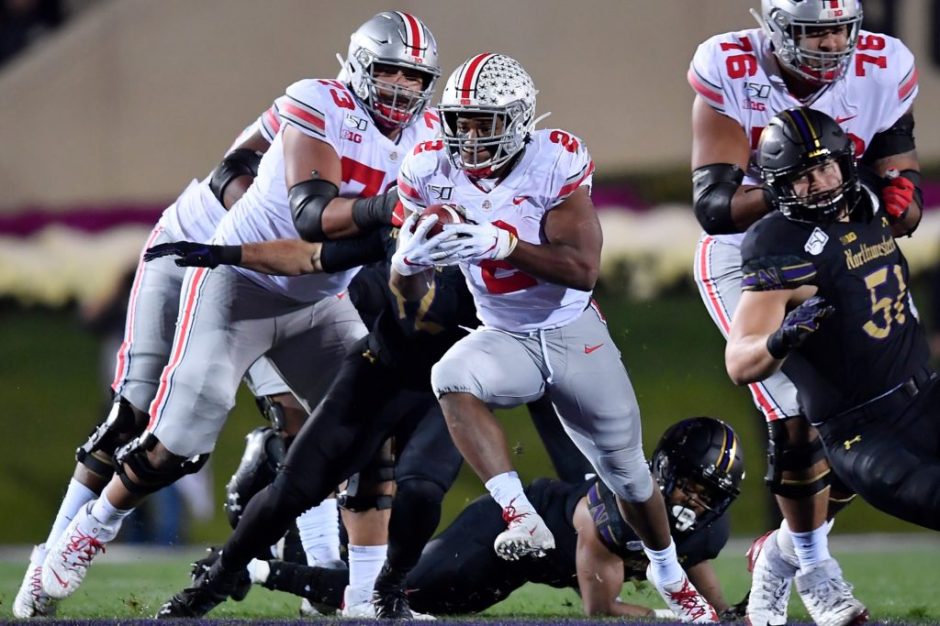 #1 The Ohio State Buckeyes quarterback Justin Fields threw four touchdowns and running back J.K. Dobbins ran for 121 yards as the No. 4 ranked Buckeyes crushed Northerwestern in a laugher 52-3 on Friday night.

#2 Pittsburgh (5-2, 2-1) edged Syracuse (3-4, 0-3) 27-20 when Pittsburgh quarterback Kenny Pickett threw for 232 yards and two touchdowns. Pickett even used a trick play in one of his touchdowns. The win was Pittsburgh’s fourth consecutive.

#4 Michigan State University head coach Mark Dantonio, who had a seven-hour deposition for wrongful termination issues regarding the recruiting of Austin Robertson, who is in prison for sexual assault. Six MSU players have entered a transfer portal and MSU is in a state of dysfunction are 4-3 this season.

On the NCAAB podcast with Michelle:

#1 Just getting an update from Michelle on the Duke Blue Devils’ Zion Williamson, who is out with a mild right knee sprain. Williamson has missed three games since his shoe exploded on him last week. Duke lost to Virginia Tech and beat Syracuse since Williamson has been out.

#2 Former Indiana head coach 78-year-old Bobby Knight is reportedly declining and he’s suffering from a cognitive disorder. He fears his memory is fading on him.

#3 The Howard Bison are a near .500 team. They have won four out of their last six games and have two games left in the season. What do you look for in the Bison going into the postseason?

Michelle does the NCAAB podcasts Sundays at http://www.sportsradioservice.com

Catching the vaunted Syracuse Orangemen a hemisphere away from the Carrier Dome seemed like a good idea for the Cal Bears.

But that’s only if you haven’t checked the numbers: after Syracuse’s 92-81 win over Cal on Tuesday, the Orangemen are a perfect 8-0 at the Lahaina Civic Center, winning Maui Invitational titles in 1990 and 1998.

After beating Cal, No. 8 Syracuse is poised to win a third title, facing Baylor on Wednesday in the tournament’s championship game.  Cal will face Dayton–narrow 67-66 losers to Baylor–on Wednesday in the EA Sports Maui Invitational third place game.

“I thought we played really, really hard, really pleased with the effort,” Coach Mike Montgomery said.  “We had some lapses of things and I don’t think in that level of game you’re going to be able to win if you have lapses.”

In comparison to the Bears loss to Syracuse in last season’s NCAA second round at San Jose, this was a huge improvement for Cal.  Allen Crabbe and Justin Cobbs played tentatively, and the Bears struggled to figure out the Syracuse zone in a six-point loss that seemed much bigger.  This time, Cal played well in transition, and gave the ‘Cuse a battle, shooting 51 percent and scoring 81 points.

“I thought watching Cal yesterday that their team this year is much better than last year’s team,” Syracuse Coach Jim Boeheim said.  “I just think (Jabari) Bird is one of the better freshman composure-wise that I’ve seen.”

The Bears played without center Richard Solomon, who had played 22 consecutive games, but missed Tuesday’s game with an eye injury.  Without their big man, the Bears didn’t back down, getting poised performance by five freshman in their nine-man rotation, and trailing 62-59 with 8:54 remaining when Syracuse pulled away.

Cal was led by Cobbs with 18 points and eight assists.  Bird had 17 points and seven rebounds, David Kravish had 15, and Jordan Mathews 12.  Tyler Ennis led Syracuse with 28 points, and Trevor Cooney added 23.

“I like the way we fought without our big guy, Richard Solomon,” Cobbs said.  “I think we played hard and gave them everything we wanted.  Just couldn’t pull it out at the end.”

The Bears fell to 5-1 on the season, and their meeting today with the Flyers provides another opportunity for an significant win as Dayton upset No. 11 Gonzaga on Monday.

LAHAINA, Hawaii–The Golden Bears came out a little edgey in their win over Arkansas 85-77 on Monday night at the Maui Invitational, maybe they were just nervous. The combined records of these two teams in that tournament on before Monday night 30-0. So it’s hard to decide who your favoring. They had a scuffle early on in the game in the sense the Bears were not hitting shots and not making the plays that they wanted to make and it had been rehearsed all week in practice.

It was rehearsed in practice which was a long week of practice and Cal head coach Mike Montgomery said that the team pretty much forget everything they practiced for all week in the first five minutes of the game. A couple of things happened first of all they did start playing the way they were coached to play and the other one that made a huge difference in the past forward Richard Solomon had managed to collect two fouls early in the game and then sit down here Solomon collected a third foul early in the second half.

Montgomery sat Solomon down and in came Roger Moute a Bidias at forward and said to the freshman “you know how to do this I have to trust you and get out there and play” and play he did he played with three fouls for much of the rest of the game and Moute a Bidas fouled out in the final 1:10 of the game collected 11 points and had more than a dozen and half rebounds after that point and began and basically to took over the floor.

The Bears faced Syracuse on Tuesday and their best known for their two-three zone defense and they play that two-three defense better than anyone else in the country. Cal faced them in the NCAA Tournament and did not do well at all and Monty is hoping that those players can carry over because one of the reasons they did not do well is they didn’t really attack the weaknesses of that two three zone.

There aren’t that many of them because the Orange have guys that are 6’8 and 6’9 out on the wings and they make it difficult but their are seams in a two three zone. There are places where you can take the outside it’s going to be up to Cal’s front court to really take advantage penetrating that zone and hit some higher percentage shots.

This was a closer game than the tournament was last year even though they don’t have Alan Crabbe and Crabbe was probably their best outside shooter threat they’re a more veteran club despite Crabbe’s departure and with the inside presence of both Crabbe had a tremendous game and Solomon had a terrific first half on Monday night that indicates that they could play competitive against this Syracuse team.