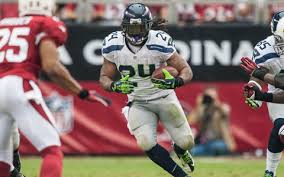 Marshawn Lynch, who has carried Seattle to its second Super Bowl appearance with his ferocious running this season, has been getting some flack by members of the press for abruptly ending his press conference after six minutes on  Tuesday and Wednesday during Super Bowl media access.

My advice is this: deal with it.

Lynch is a running back that is like no other and doesn’t need to speak or brag that he is a top-ten running back in the NFL. Nor does he need to grant every reporter access into his inner-circle and ask questions if he is uncomfortable.

Lynch is a man of few words that flat out lets his game do the bulk of his talking.

Case in point by Lynch’s spectacular 2013 season in which he finished in the top-ten among running backs in rushing yards (1,257), touchdowns (12), and carries (301) while playing all 16 games, a rarity for running backs in the hard-hitting NFL.

Then Lynch really turned it on in the playoffs.

Against New Orleans in the NFC Divisional round, Lynch steamrolled the Saints rushing for 140 yards (a playoff career-high and Seahawks record) and two touchdowns on 28 carries in Seattle’s 23-15 victory.

Then against the hated NFC West division rival the San Francisco 49ers in the NFC Championship Game, Lynch thumped San Francisco with 109 rushing yards, one thunderous 40-yard touchdown run, on 22 carries leading Seattle to a 23-17 victory and the NFC crown.

The 109 rushing yards Lynch racked up was the first time that a running back gained over 100 yards against San Francisco all season.

Lynch’s dominance in the regular season and postseason (with the help of a punishing and hard-nosed defense), were clearly the talk of the NFC and football world when Seattle touched down in New York Sunday.

For Seattle to hoist the Vince Lombardi trophy Sunday night after what should be an excellent game against the AFC Champions, Denver Broncos, Lynch will have to turn in a career performance on the biggest of stages. The Super Bowl has a way of humbling you in a New York minute and if you aren’t focused and prepared, the Super Bowl can be unforgiving.

We know that Lynch oozes confidence, but what Lynch must continue to run with that “Beast Mode” mentality that make opposing defensive backs cringe when linebackers miss tackling the 5’11, 215-pound bulldozer from Oakland, CA.

It’s no secret that Lynch will have all eleven members of Denver’s defense (along with millions of fans on Super Bowl XLVIII Sunday) watching his every move. If you are a defense, you will be ok with allowing two to three yards a carry by Lynch, its the10 to 15-yard runs that you need to concern yourself with.

If Lynch gets through Denver’s front seven on a consistent basis Sunday, it’s almost certain that Seattle will have a fighting chance at delivering the Pacific Northwest its first major world championship since the Seattle SuperSonics took home the NBA title in 1979.

Sixty minutes in the Big Game with Lynch carrying a city and a region on his back toward a championship: enough said.

This Thursday, August 8 at 6pm, the preseason schedule kicks off when the San Francisco 49ers take on the Denver Broncos at Candlestick Park. This matchup features two of the league’s best squads from 2012, and the two odds-on-favorites to win Super Bowl XLVIII. Last season the Broncos finished 13-3, winning the AFC West before losing to the eventual Super Bowl Champion Baltimore Ravens in the playoffs. The San Francisco 49ers finished 11-4-1, winning the NFC West, before falling to the same Ravens in the Super Bowl.

First the obligatory disclaimer that this is still just preseason football. The outcomes don’t matter and aren’t indicative of how well a team will do during the regular season. Instead, it’s a time to hope for good health, to keep an eye on a few key position battles, to look for growth and improvement from key players, and to hope for good health some more.

San Francisco has already been dealt a couple of blows due to injuries, most notably to their top wideout Michael Crabtree who is expected to be out until at least around week 12 with a torn Achilles. He joins receiver Mario Manningham on the PUP list. The 49ers have a stockpile of receivers in camp vying for roster spots, with really only Anquan Boldin penciled in as a sure thing as the new go-to option for Colin Kaepernick. AJ Jenkins, Kyle Williams, Kassim Osgood, and rookie Quinton Patton have all also been limited or have missed several practices due to minor injuries. The team recently signed Austin Collie and Lavelle Hawkins to join the fray at the position, which also includes Ricardo Lockette, Marlon Moore, and Chad Hall. The wide receiving corp as a whole may be the biggest single thing to look for during the preseason, both in terms of who can stay on the field and who can seize the opportunity and fill out the depth chart behind Boldin.

More recently, San Francisco lost cornerback Chris Culliver for the season with a torn ACL. He had been penciled in as the team’s third corner behind Carlos Rogers and Tarell Brown. It’s a big blow at a position that already had questionable depth. Keep an eye on Nnamdi Asomugh, Tramaine Brock, and Perrish Cox who will be fighting to take over the spot.

The other major position battles to watch will be at kick and punt returner, free safety, and nose tackle.

LaMichael James appears to have the inside track to be the return specialist, as he is listed atop the first game release depth chart the 49ers have issued at both kick and punt returner. He struggled when he was given brief looks at returning punts last season, but reportedly has impressed during camp.

At free safety, CJ Spillman is currently listed as the starter. First round pick Eric Reid, who the team traded up to get, however, is still considered the favorite to start game one of the regular season. Craig Dahl has reportedly had a very strong spring, but is on the outside looking in at this point.

Ian Williams and Glenn Dorsey are fighting it out for the nose tackle spot. Both have been performing well at camp, but Williams has the edge.

Notes: Star linebacker Patrick Willis suffered a fracture in his right hand, which will require surgery. Willis has a history of broken hands, and most importantly a history of playing through them without missing a step. He is still expected to be ready to go for the season opener against the Packers, but will be sitting out Thursday’s preseason opener.