The Sacramento Kings announced on Monday their intention to move their G League franchise  – the Reno Bighorns – to Stockton for the 2018-19 season. This move would have their development team just 45 minutes away from Kings offices, coaches, training and medical staff. This also follows the pattern of the majority of teams in the NBA which have relocated their developmental league teams to within an hour driving distance of their organization’s main facilities.

“Our NBA G League team has been an incredible asset to help prepare players for NBA action and bringing the team closer to Sacramento will allow us to continue to build on that success and increase efficiency to this valuable development tool,” said Sacramento Kings General Manager Vlade Divac. “Kings fans in Stockton will now have an opportunity to see the next-generation of NBA players each week.”

The Kings have taken full advantage using players from the Reno team over the past two seasons. In 2017-18, the team sent several of its rookies to play with the Bighorns to gain some experience which they put to good use at the NBA level. Skal Labissiere and Malachi Richardson (now with the Toronto Raptors) both benefited greatly from their time with the Bighorns.

This season has seen the addition of the “two-way” players who can be on the NBA roster of their parent team and then must spend the remainder of their time playing in the G League. JaKarr Sampson and Jack Cooley have both made substantial contributions to the Kings during the regular season. Sacramento also signed Nigel Hayes from the Westchester Knicks to a two-year contract.

The Bighorns sent three players to three other NBA teams this season. David Stockton – who has also played for the Kings – was signed Utah Jazz. Reggie Hearn went to Detroit and Aaron Harrison was signed by the Mavericks.

Stockton is a very interesting choice because of its tremendous growth potential. With Bay Area housing prices soaring, people are willing to endure longer commutes in order to be able to buy a home. Stockton is projected to a desirable locale because of its freeway access and rail service to the Silicon Valley. That means potential fans for the G League team that could be cultivated into Sacramento Kings fans.

Stockton already has a very strong track record of supporting minor league sports teams. The Stockton Ports have played baseball in California League since its beginning in 1941 and are currently an affiliate of the Oakland Athletics. Stockton is also the home of the Heat of the American Hockey League who are affiliated with the Calgary Flames. The Heat and the G League team will share the same arena.

“It is my honor to welcome the Kings organization to Stockton and I look forward to watching NBA G League action at the Stockton Arena,” said Stockton Mayor Michael Tubbs. “The Kings have been known for their tremendous impact in the community and we’re excited to have their support as we continue to reinvent Stockton.”

A four-time All-America City winner, with honors as recently as 2017, Stockton is California’s thirteenth largest city. Stockton Arena is located in the heart of the city’s downtown waterfront and entertainment center. The venue opened in 2005 and includes 24 luxury suites, seating for up to 12,000.

The Kings G League basketball operations will be headquartered at Kings former practice facility in Natomas next to the old arena. The business operations for the new team will be housed at the arena in Stockton. 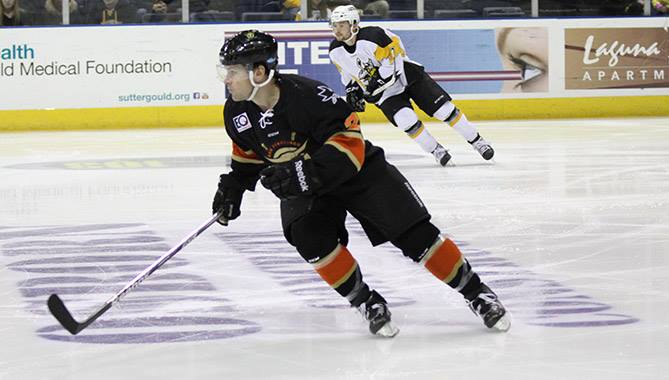 The Bulls and Thunder condensed enough action for one game into the first 20 minutes of play. The four goals secured by the Thunder’s Matt Bergland, James Henry, Mike Dalhuisen, and Nick Larson were accompanied by three fights from the Bulls Scott Langdon, Steven Tarasuk and Kris Belan. Berglan scored early in the period to give Stockton the 1-0 lead and then at 14:35 the Thunder scored three unanswered goals over the next 3:04.
Head Coach of the Bulls had seen enough after the fourth goal that he pulled regular starter Tyler Beskorowany and put in back-up goalie J.P. Anderson.

In the second, the Bulls leading scorer Tyler Gron received a nice pass from Adrian Foster and beat Parker Milner and brought the deficit to only three goals.

The Thunder sealed the victory in the third when Oslanki beat Anderson and slammed the door shut on scoring for the night and give the game its 5-1 finale.

The Bulls continue this rivalry into the New Year when they face Stockton again this Friday at 7:30pm in Stockton.