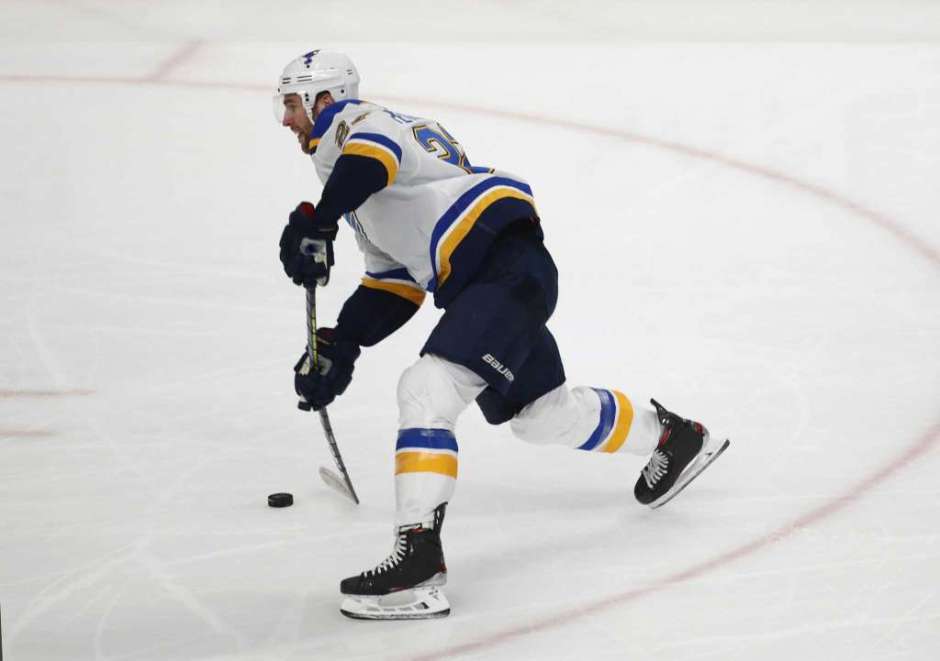 SAN JOSE- The Sharks fell 5-2 to the St. Louis Blues Saturday. Blues goals came from Jordan Kyrou, Jaden Schwartz, Alex Pietrangelo, and Ryan O’Reilly. Jake Allen made 34 saves in the win. Sharks goals came from Brent Burns and Stefan Noesen. This was Noesen’s first game as a Shark after being claimed off of waivers from the Pittsburgh Penguins on December 19. Martin Jones made 23 saves in the loss.

The Sharks are 1-3-0 since Bob Boughner took over as Sharks Head Coach on December 11. In two of those games they gave up five or more goals against. After Saturday’s game, Sharks captain Logan Couture described the Sharks’ offensive zone struggles:

I thought in the offensive zone we didn’t have enough, I guess polish around their net, you know, we weren’t winning enough battles to score enough goals. The pucks were there, he wasn’t handling many of the shots well. There were a lot of rebounds in the slot, we just didn’t get there to got the second opportunities.

Asked for a reaction to these two losses in a row where the Sharks out-shot their opponent, Couture said: “I don’t care about shots on goal, I care about us losing. We’ve been doing a lot of that. So, the feeling sucks, I mean it’s not fun.”

At the other end of the ice, the Sharks fell short as well. Sharks goaltender Martin Jones said: “Made some mistakes that we shouldn’t be making late in the game and they cost us. When you do that you need a save and we’re not getting that either.” Of Jones’s performance, Bob Boughner said: “He was pretty decent. He gave us a chance. I think their first goal was just okay but there’s not much he could do on the other two. We ask our goalies not to try and have to win us a game, just give us a chance. I thought he gave us a chance tonight.”

The Sharks out-shot the Blues in the first period 15-6 but the period ended with the Sharks on a power play and no goals scored.

Brent Burns changed that at the start of the first period, before the Sharks power play expired. He scored his first goal in 16 games with a beautiful shot that went off the post and in. Receiving a pass from Burns in the corner, Erik Karlsson took a moment to settle the puck at the top of the slot before sending the puck back to Burns for the shot above the face-off circle.

The Blues got that back in less than two minutes. Jordan Kyrou entered the zone and split the defense with his formidable speed. One on one with Jones, his back hand went right under the goaltender.

The visitors went on to take the lead at 5:30 of the period during a power play caused by a delay of game penalty to Evander Kane. Brayden Schenn sent the puck right through the blue paint in front of Jones and Jaden Schwartz had his stick free on the other side of the net so he could tap the puck in. Assists went to Schenn and David Perron.

The Sharks tied it back up when Brenden Dillon’s stretch pass found Stefan Noesen just above the St. Louis blue line. Noesen caught it in stride and skated until he was a nose ahead of the Blues defender before he took the shot. He beat Jake Allen on the short side. Assists went to Dillon and Burns. It was Noesen’s second of the season and his first as a Shark.

The shot count was a little closer in the second period, 13-9 Sharks.

St. Louis took the lead back at 11:07 of the third period with a goal from Alex Pietrangelo. Pietrangelo and Ivan Barbashev came out of the neutral zone with only Marc-Edouard Vlasic back. Vlasic effectively eliminated the pass so Pietrangelo shot from the top of the face-off circle and put it in the top corner. Assists went to Jaden Schwartz and Brayden Schenn.

The Sharks got a game-ending power play at 16:53, not unlike the end of their last game in Arizona. The Sharks could not score again and this time they also gave up a short-handed, empty net goal. That was scored by Ryan O’Reilly with an assist to Justin Faulk. Alex Pietrangelo scored another at 19:52.

The Blues out-shot the Sharks 13-8 in the third period.

The Sharks next play on Sunday at 7:00 PM PT against the Vegas Golden Knights.