photo from stlouisdispatch.com: New Jersey Devils’ P.K. Subban, right, handles the puck as he is defended by St. Louis Blues’ Oskar Sundqvist, of Sweden, during the second period of an NHL hockey game Tuesday, Feb. 18, 2020, in St. Louis.

#1 Good things come to end at some point and the St Louis Blues eight game winning streak ended at eight games and who would have thought the New Jersey Devils would have been the team to beat them 4-2 on Friday night. The Devils scored with help from Dakota Mermis his first NHL goal and defenseman Connor Carrick his first of the season.

#2 The Winnipeg Jets shutout the Vegas Golden Knights 4-0 as Jets goaltender Connor Hellebuyck made 29 saves to do it. Hellebuyck leads the NHL in shutouts this season with six.

#3 The Calgary Flames edged the Arizona Coyotes 3-2 the Flames got scoring help from Johnny Gaudreau, TJ Brodie, and Mikael Backlund. The Flames Matthew Tkachuk got an assist on each of the goals.

#4 The Anaheim Ducks just got by the Toronto Maple Leafs 2-1, Carter Rowneyu and Adam Hendrique both scored and goaltenders John Gibson and Ryan Miller stopped 30 shots for the Ducks.

Join Matt on the NHL podcast each Saturday at http://www.sportsradioservice.com

NHL podcasts with Daniel Dullum are heard every Sunday at http://www.sportsradioservice.com

photo from startribune.com: Minnesota’s Ryan Hartman (38), Marcus Foligno (17) and Jared Spurgeon (46) celebrate a goal against the Oilers during the second period.

#1 The Minnesota Wild’s Jared Sprugeon got a natural hat trick on Friday night against the Edmonton Oilers 5-3. The Wild also got goal help from Kevin Fiala and Carson Soucy as the Wild pick up their second straight win.

#2 The St Louis Blues David Perron found the back end of the net again scoring his 24th goal as the Blues defeated the Dallas Stars 5-1. Dallas goaltender Ben Bishop left early in the contest after allowing multiple goals.

#3 The Boston Bruins Patrice Bergeron scored a pair of goals in the Bruins 4-3 win over the Calgary Flames, Bergeron is on a roll scoring 21 times in 32 games

#4 The New York Rangers got three goal win over the Carolina Hurricanes 5-2, the Rangers Mike Zibanejad scored a goal and had two assists. The Rangers will be on back to back games hosting the San Jose Sharks tonight at MSG.

#5 The Chicago Blackhawks edged the Nashville Predators 2-1 on Friday night, the Hawks Alex DeBrincat got a third period goal and also in overtime to put Chicago over the top 2-1

Alexander Ovechkin of the Washington Capitals who scored his 699th goal of his career on Thursday night in Washington just one short of the 700 club (photo from wikipedia.com)

#4 The Philadelphia Flyers Kevin Hayes got an overtime goal at 3:51 that was the difference in the Flyers 4-3 win over the Columbus Blue Jackets in Toronto. Stefan Matteau Jr scored his first goal since March 10, 2016.

#5 The St Louis Blues got a 1-0 shutout against the Arizona Coyotes as the Blues Ryan O’Reilly scored the games on goal and goaltender Jordan Binnington made 14 saves  for the shutout. 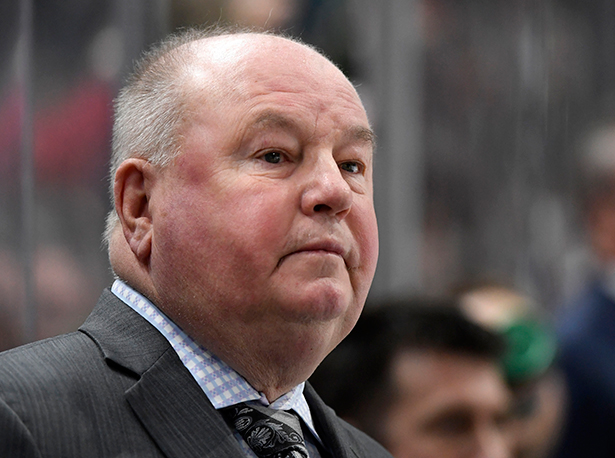 gamingtoday.com photo: Ex Minnesota Wild head coach Bruce Boudreau watches from the Wild bench just before he was canned by the team this weekend

NHL podcast with Daniel Dullum with this week’s latest

2 Sharks’ Erik Karlsson out for remainder of season with broken thumb; Sharks’ Evander Kane upset with NHL over suspension

Join Daniel each Sunday for the NHL podcast at http://www.sportsradioservice.com

#1 The San Jose Sharks loss to the Arizona Coyotes is one of the games that Sharks head coach Bob Boughner would soon like to forget a 3-2 loss that saw the Yotes score a goal in each of the first, second and third periods on Tuesday night.

#2 The Sharks blew a 6-3 opportunity with 43 seconds left after the Coyotes committed two penalties and the Sharks pulled their goalie to try to boost the offense, but they couldn’t take advantage and failed to score and lost the game.

#3 The Sharks have failed to take advantage of the man advantage, scoring only once out of 15 times in their last five games.

#5 The Sharks, who have lost seven of their last eight games and will try and get in the win column Saturday against the St. Louis Blues. Mary Lisa sets this one up for us.

Sharks podcasts with Mary Lisa are heard every Saturday at http://www.sportsradioservice.com

On the NHL Stanley Cup Finals podcast with Joe Lami:

#1 Is it any surprise that the St. Louis Blues are up by one game leading the Finals 3-2?

#2 The Blues got scoring help from Ryan O’Reilly and Dave Perron. That was all the help they needed in the 2-1 win.

#3 Talk about how big O’Reilly and Perron’s performance was for the Blues.

#4 In goal, the Blues’ Jordan Binnington stopped 38 of 39 Bruins shots and allowed a goal.

#5 Bruins and Blues bring it back to St. Louis this Sunday. Will the Bruins turn it around as the Blues are on the brink?

NHL Stanley Cup Finals podcast with Joe Lami can be heard each Friday at http://www.sportsradioservice.com 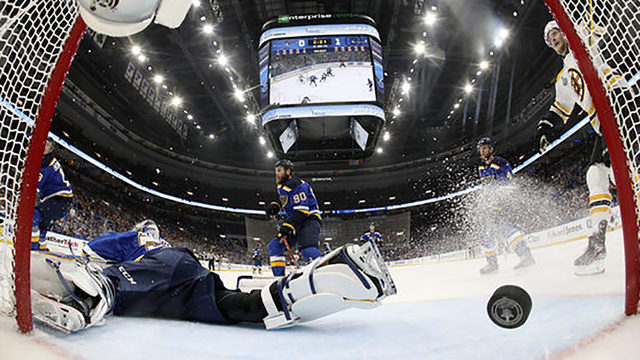 photo from wsoctv.com: One of seven Boston Bruins goals on Saturday night in St. Louis leaves the Blues goaltender Jordan Binnington laid out in front of the net as the Bruins move ahead 2-1 in the Stanley Cup Finals.

On the NHL Stanley Cup Finals podcast with Daniel Dullum

1 Stanley Cup Finals: Bruins in front 2-1, the Bruins got a 7-2 win in Game 3 on Saturday night. Meanwhile, back in Game 2, the Blues did get a historic win. 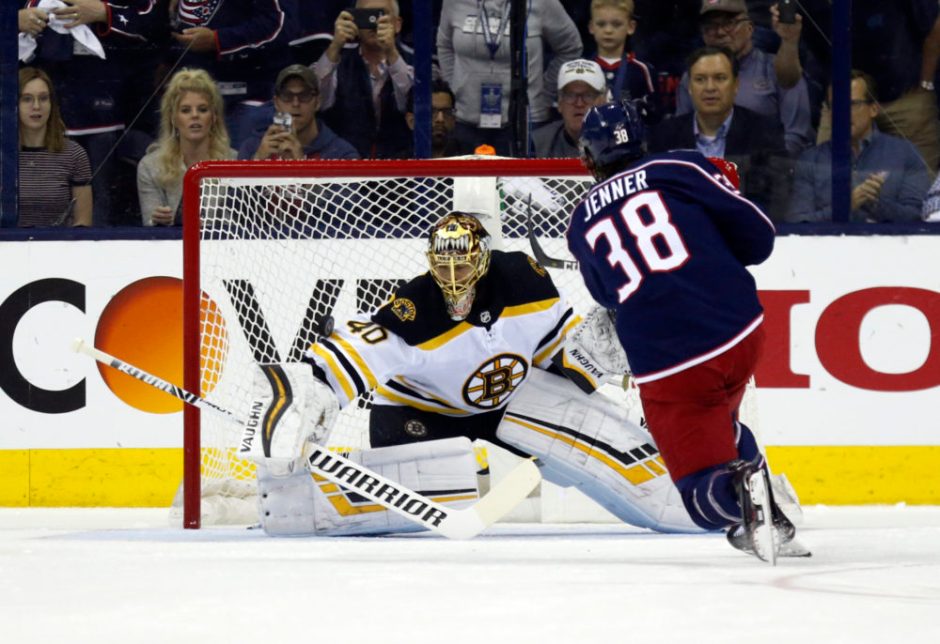 On the Stanley Cup Final podcast with Joe:

#1 The San Jose Sharks’ season ended last week as the players cleaned out their lockers the discussion of free agency was turned up as the Sharks might shop or drop free agents, forwards, Joe Pavelski, Joe Thornton, Joonas Donskoi, Michael Healy, and Gus Nyquist.

#3 Will restricted free agents Timo Meier and Kevin LaBanc be back?

#4 The Boston Bruins swept through the Stanley Cup Playoffs and made it look easy. Joe takes a look how easy it will be against the St. Louis Blues in the Final.

#5 The Bruins have home ice and had plenty much of a flawless postseason, going almost error free.

Listen for Joe Lami on the NHL Stanley Cup Finals podcasts each Friday at http://www.sportsradioservice.com