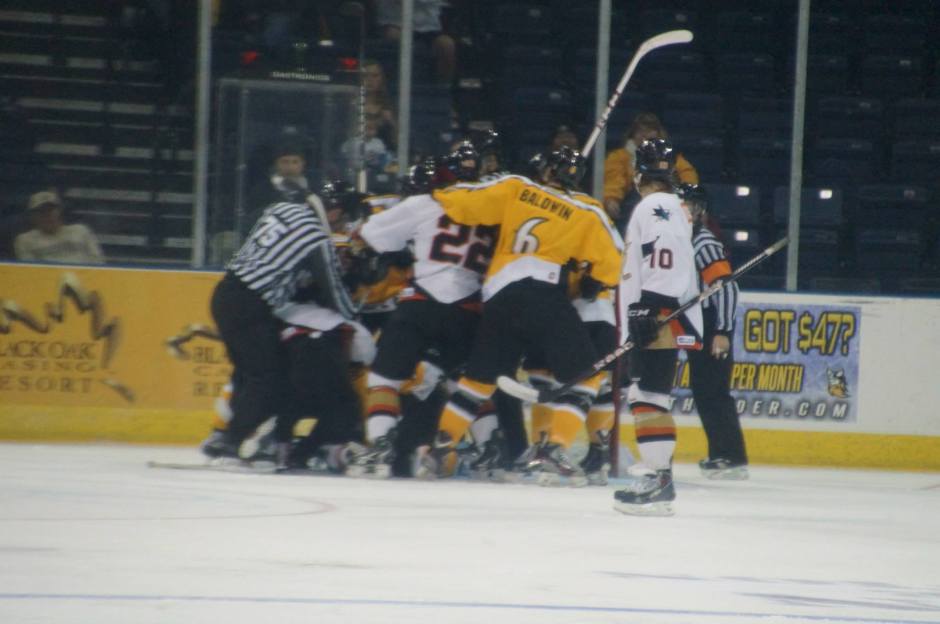 STOCKTON – The San Francisco Bulls (15-20-4-1) beat the Stockton Thunder (20-13-0-5), 3-2 in dramatic fashion that saw the Bulls score the tying goal in the third period and win a shootout. The Bulls Sebastian Stalberg shined bright for the Bulls as he scored the equalizer and the winning goal in the shoot out over Brian Foster. Bulls goalie Tyler Beskorowany stopped 34 shots on the night  including the big stops in the shootout on J.P. Burkemper and Matt Bergland.

The Thunder got on the board first when Shawn Boutin took a nice shot from the point and beat Besko who was being screened hard by a Thunder player. There were four penalties in the first including matching fighting majors on Bigos for the Bulls and MacLeod for the Thunder. Macleod was also charged with an Illegal check to the head.

The Bulls tied it up in the second when Jordan Morrison scored his 11th goal of the season off of a rebound that bounced off Foster. Dale Mitchell and Dean Ouellet received assists on the goal. For Ouellet this upped his point streak to six games in a row. With less that five minutes left, the Thunder regained the lead when Matt Bergland beat Besko on a nice pass from Greg Miller and brought it to a 2-1 game after two periods.

The third period saw both teams come out aggressive and saw three penalties called on the teams including a pair of roughing minors only 51 seconds into the period. Sebastian Stalberg tied the game with 6:38 left in the game when he followed his shot and gathered his own rebound and beat Foster to make it 2-2. Both teams turned up the heat as Riley Brace and Garet Hunt displayed when they got unsportsmanlike conduct penalties with three minutes left in the game. Foster and Besko were able to turn away 30 total shots in the period and take the game into overtime.

In the extra period the Bulls gave Stockton a chance when Kyle Bigos was called for tripping but the Bulls were able to hold them off and take the game into a shootout.

In the shoot out, Dean Ouellet and Stalberg scored for the Bulls and Besko stopped four of the the five Thunder shooters and gave the Bulls the 3-2 victory.

The Bulls now have a long 11-day holiday until they return back inside the Cow Palace on January 30th when they take on the same Stockton Thunder. Time of game is at 7:30pm.