stocktonheat.com photo: The San Jose Barracuda who hosted the Stockton Heat last Sunday will face off tonight against the Colorado Eagles the Colorado Avalanche AHL affiliate at SAP Center in San Jose tonight

#1 The game in Stockton was razor close a loss for the SJ Barracuda against the Stockton Heat 2-1 the Barracuda has been trying to get on track and it was frustrating to lose by a goal.

Marko Ukalovic does the Barracuda podcasts each Wednesday at http://www.sportsradioservice.com On the SJ Barracuda podcast with Marko Ukalovic:

#2 This is not the typical way that Barracuda head coach Roy Sommer wants to lose a game. The loss marks the fourth time in seven games the Cuda have lost.

#3 Cuda goaltender Josef Korenar stopped 42 shots, but lost the game. It was his highest total of saves this season.

#4 The Barracuda’s Jonny Brodzenski has been a bright spot. He has a five-game point streak going along with two goals and five assists.

#5 The Cuda host the Bakersfield Condors (9-10-2-1) tonight at SAP Center. It’s going to be a barnburner. The Condors have won three straight and the Cuda have won one game in their last three games.

Marko is a Barracuda beat writer and joins Sports Talk every Wednesday for the Cuda podcasts at http://www.sportsradioservice.com

#1 What’s scary about the Barracuda is they can’t hold a lead past the third period. What does head coach Roy Sommer need to do to correct that?

#2 A four-goal period can really do a lot of damage and Tucson has in the postseason and now in the regular season put an offensive flurry on the Barracuda.

#3 To start the game, the Barracuda’s Joel Kellman sent a pass over to Thomas Gregoire, whose shot was initially saved by Roadrunners goalie Adin Hill. Joachim Blichfeld grabbed the puck on a rebound and scored the Cuda’s first goal of the game.

#4 Sommer said after the game: “Unfortunately, the game is 60 minutes and we only played 40 of it.” There have been some games where time just ran out for San Jose.

#5 The Barracuda take on the Bakersfield Condors who they last played on Wednesday, Oct. 30th in a day game and shut them out 5-0. This game is on the road, could the Cuda expect the same kind of offense in this one Saturday night? 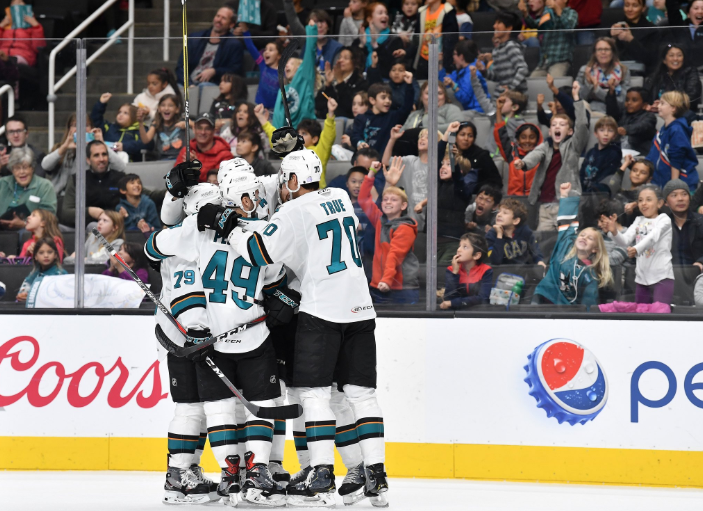 #1 The Barracuda (3-3-0) are coming off a split in Colorado last Friday and Saturday nights taking the second game. How important is it for the Cuda to get that split going into Wednesday’s game against the Bakersfield Condors (3-4-0)?

#2 The Barracuda not only got the win last Saturday in Colorado (4-3-0) in game 2, but they threw a shutout 4-0 after getting beat on Friday night.

#3 Cuda goalie Josef Korenar (2-2-0) made 31 saves to collect his first shutout of the season and his fifth of his AHL career.

#4 The game last Saturday against the Eagles was the Barracuda’s 150th victory in franchise history.

#5 The Condors are a team that could give the Barracuda fits and their looking to pick up their fifth win. Meanwhile, the Barracuda have won two of their last five games and have home ice for today’s matinee.

Marko does the Barracuda podcasts each Wednesday at http://www.sportsradioservice.com

On the San Jose Barracuda podcast with Marko Ukalovic:

#1 The pressure’s on the Barracuda, who lost a tough 4-2 game three on Monday night. To stay alive in the series, they have to win Game 4 tonight at SAP Center.

#2 The Barracuda’s Matt Fonteyne took three on two pass and fed it to the Jon Martin, who took a wrist shot for a five-hole goal past the Gulls goalie Jeff Glass for the game’s first goal.

#3 The Gulls got back with the two Sams, Sam Carrick fed a centering pass to Sam Steel, who shot a one timer in the top left corner to tie it at 19:29 in the first period

#4 Ben Street and Chase De Leo each scored a goal to make it 3-1 and the Gulls never looked back eventually getting a two-goal win.

#5 The Barracuda are going for all the marbles tonight. After watching how the Gulls operate in these first three games, how do you see head coach Roy Sommer preparing the club for tonight?

Marko Ukalovic does the Barracuda podcasts each Wednesday at http://www.sportsradioservice.com