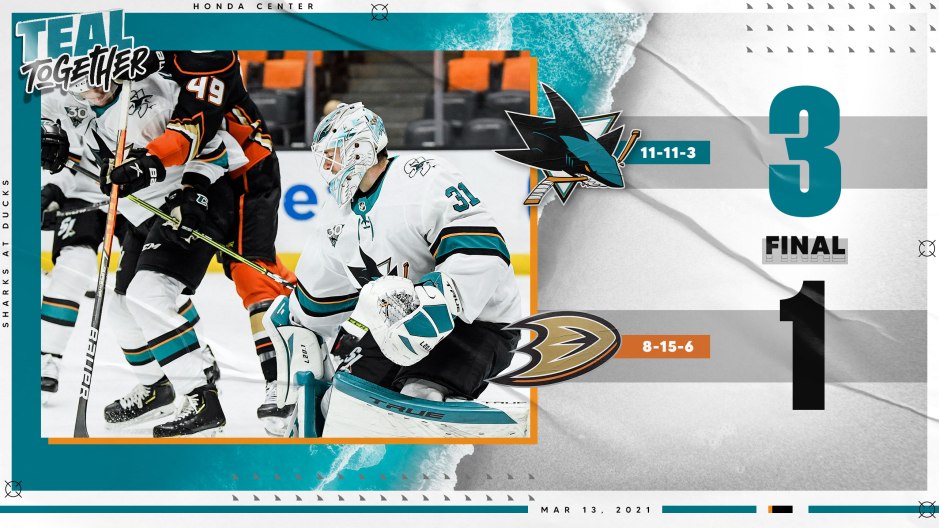 The San Jose Sharks goaltender Martin Jones (31) allowed only one goal against the Anaheim Ducks at the Honda Center in Anaheim on Sat Mar 13, 2021 (@SanJoseSharks photo)

The San Jose Sharks won their third in a row on Saturday, a 3-1 win against the Ducks in Anaheim. This is the first win streak for the Sharks this season. Sharks goals came from Evander Kane, Kevin Labanc and Dylan Gambrell. Martin Jones made 26 saves for the win. Max Jones scored for the Ducks and Ryan Miller made 30 saves in the loss.

After the game, Sharks Head Coach Bob Boughner said: “It feels good to have a first little winning streak I guess you can call it, three games in a row. You know, especially on the road. The guys played well, it was a tight game.”

The first Sharks goal came just after an Anaheim power play in the first period. Taking advantage of a turnover in the Sharks’ zone, Kane went the other way in a hurry, with Tomas Hertl and Mario Ferraro just a step behind. Kane carried it all the way to the face-off circle before taking the shot and beating Ryan Miller on the blocker side.

The first period shot count was close, at 8-7 Sharks. There were five penalties called in the first, three to Anaheim and two to San Jose. The Sharks had four shots i their power plays and allowed just one powr play shot to Anaheim. In the face-off circle, the Sharks prevailed 58% of the time.

Anaheim tied it up at 5:38 of the second period. Max Jones skated around Radim Simek with the puck on his backhand. As he cut away from the wall he switched to his forehand for a quick shot into the far side of the net. Assists went to Kevin Shattenkirk and Isac Lundestrom.

Kevin Labanc grabbed the lead back for the Sharks just under a minute later. Tomas Hertl came around behind the net and, while losing his footing, passed the puck around the post to the front for Labanc to take the shot. Assists went to Hertl and Mario Ferraro.

The Sharks outshot the Ducks 14-9 in the second period, and out drew them in the face-off circle, winning 16 of 21 draws. There was just one penalty in the period, going to Anaheim. The Sharks did not get any shots on that power play.

Dylan Gambrell gave the Sharks a 3-1 lead at 2:07 of the third. Ryan Donato gathered the puck up behind the net after it came loose in the corner. Donato tried for a wrap around but was thwarted by traffic. Gambrell was in the thick of that traffic on his knees when he managed to push the puck in. Assists went to Donato and John Leonard. It was Gambrell’s first goal of the season, and his first in over a year.

The Ducks pulled their goaltender for an extra skater, with almost three minutes left in the game.

The third period shots were dead even at 11 each. The Sharks took the only penalty in the period, but allowed just one shot to the Ducks’ power play. Additionally, the Sharks took four short-handed shots during that penalty kill. The Sharks slipped badly in the face-off circle, dropping to 30% for the period. Overall, Logan Couture and Tomas Hertl won more draws than they lost, and, through the first two periods, Dylan Gambrell won more than 50%.

The Sharks next play on Monday against the Golden Knights in Las Vegas at 7:00 PM PT. 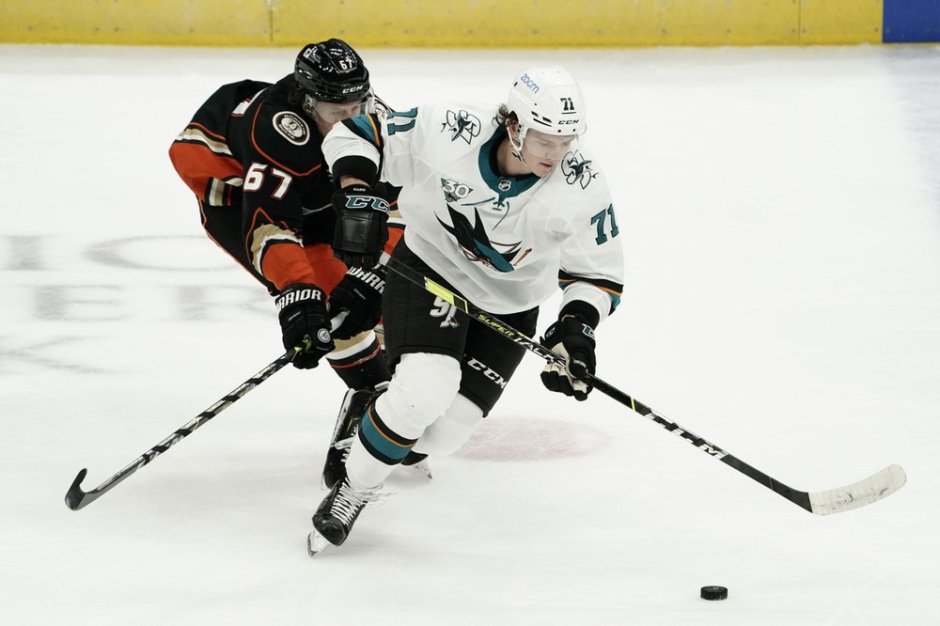 The San Jose Sharks Nikolai Knyzhov (71) gets behind the puck while the Anaheim Ducks Rickard Rakell (67) stays right behind Knyzhov during Sat Feb 7, 2021 game at the Honda Center in Anaheim (AP News photo)

The San Jose Sharks lost 2-1 in a shoot-out to the Anaheim Ducks Saturday. Max Comtois scored the game winner in the shoot-out for Anaheim, with Isac Lundestrom scoring in regulation and Troy Terry also scoring in the shoot-out. Ryan Miller made 26 saves for the win. Logan Couture scored for the Sharks and Devan Dubnyk made 32 saves in the loss.

Saturday’s game was very different from Friday’s goal-fest. While the Sharks held the Ducks to a single goal in regulation and over-time, they did not manage to score more than one either. There was just one change in the forward roster, with Rudolfs Balcers coming in for Alex Chmelevski. Dubnyk was in net instead of Martin Jones, which was to be expected with back-to-back games. Finally, two of the three the defensive pairings were different: Burns was with Ferraro, Karlsson was with Simek, and Vlasic was with Knyzhov. Those changes on defense were probably the most impactful adjustments.

“I thought they all held their own. It was just, it was a bit of a sloppy game. You know, defensively, I have to watch the tape again and it’s tough for e to comment right after, but you know, I thought we had some breakdowns but I thought for the most part we didn’t give up a ton.”

The Sharks started early with a goal just 11 seconds in. Mario Ferraro took a shot that jumped around in some traffic before Logan Couture found it behind Ryan Miller and knocked it in. Assists went to Ferraro and Evander Kane.

That was it for scoring in the first. Special teams got to warm up in the first, with each team getting one power play and a four-on-four. The Sharks did not register any shots on their power play, while Anaheim got credit for seven. The shots were 12-10 Anaheim and the face-off advantage went to the Sharks at 53%.

The Ducks tied the game 5:42 in to the second period. Hampus Lindholm’s shot from the blue line deflected off of Ferraro and then again off of Isac Lundestrom before getting by Dubnyk. It was Lundestrom’s first NHL goal and assists went to Lindholm and Kevin Shattenkirk.

The Sharks had just one shot in the third period with 3:56 left in the period. A second later, Mario Ferraro got credit for the team’s second shot. (The first came just over five minutes in, from Patrick Marleau.) The Ducks had eight shots in the same time frame. The Sharks improved a little in the face-off circle but still came in at just 46%. No penalties were called in the third period.

The Sharks had no shots in the overtime period. The Ducks had just two but they had the puck for almost the whole period, though the Sharks won 67% of the draws.

The shoot-out did not start well for either goaltender as the first three shots went in the net. Troy Terry and Max Comtois scored for Anaheim and Ryan Donato scored for San Jose. Logan Couture, Kevin Shattenkirk and Kevin Labanc all had their shots stopped.

The Sharks next play on Tuesday in Los Angeles against the Kings at 7:00 PM PT.

SAN JOSE, Calif. — The San Jose Sharks defeated the Anaheim Ducks 2-1 in a shootout on Saturday. Corey Perry scored for the Ducks early in the first period, while Joel Ward scored late in the third for the Sharks. Joonas Donskoi scored the difference-maker in the shootout. Martin Jones made 25 saves for the win, while Ryan Miller made 44 saves for Anaheim.

After the game, Jones said:

I thought we played really well tonight. If you look at the really high quality scoring chances, I mean I could probably count them on one hand, for the ones we gave up. So, it was a really solid game for us, I mean we could have run away with that one if Miller doesn’t play the way he does. So it was a good game.

The win represents the Sharks fourth in a row, their first real win streak of the season.

Despite the lukewarm start to the season, Joe Pavelski said that the team is feeling no panic:

I don’t know if you guys are panicking, I mean your questions are kind of sounding like that. There was no panic on the bench, there hasn’t been. We believe we’ll score, we’re getting a little bit of depth scoring right now, we’re winning games. We’re playing with the lead, we’re doign a lot of stuff that we’re trying to accomplish out there.

Both teams were missing key players on Saturday. The Sharks went into the game without Marc-Edouard Vlasic or Paul Martin, putting added pressure on the younger blueliners Joakim Ryan and Tim Heed. Dylan DeMelo entered the lineup after sitting out the last 10 games. On the Ducks’ side, Ryan Getzlaf, Cam Fowler and Ryan Kesler were absent. The lone Sharks goal from Joel Ward and Barclay Goodrow would be some of that depth scoring that Pavelski spoke of. Goodrow has only played two games this season, and Ward has only played eight of the team’s 13.

Sharks head coach Pete DeBoer chose to put Goodrow at center on Saturday, though he has mostly played on the wing for the Sharks.

DeBoer explained that decision after the game:

I talked to him a little bit about it. He admitted he hadn’t played there in a long time but he had taken some draws recently for us in some games and did a good job and he’s a smart player. The way we play, we’re interchangeable down low. I thought that he could do it and help us and he did.

The Ducks got on the board first with a goal from Corey Perry. Perry caught a long pass through and across the neutral zone from Grant. This gave him a clean breakaway. Jones almost stopped the shot but it trickled through his pads and sputtered into the goal. The first period ended with the Ducks leading 1-0 and the shots 12-7 Sharks. The Sharks had two power plays in the first period, but did not score.

The Ducks were very organized in their own zone. It was rare to see any space for the Sharks to work with. Through most of the game, the Sharks seemed to be struggling to execute.

Pavelski did not see it as struggling:

I don’t know if we struggled. I think there was a couple times we maybe got caught trying to do too much or trying to be a little aggressive and gave up some odd mans, which we haven’t done, you know on the road trip and in the previous couple of games. It’s just something you have to stay on top of, but overall I liked the effort, liked a lot of the plays we had. Just gotta find a way.

By the middle of the second period, the Sharks had taken eight more shots to the Ducks’ four but the score was unchanged. No penalties came, no goals. The period dragged on.

The Ducks had their only power play in the middle of the third period. At the very end of that power play, Joel Ward and Barclay Goodrow caught a break and escaped through the neutral zone with just one Duck back to defend. Ward’s pass got by the defender, and Goodrow took the shot. Miller stopped it but Ward right on top of him to pick up the rebound and put it home. Goodrow received the only assist.

The game remained tied through the third and overtime. During the overtime period, the Sharks got credit for four shots and the Ducks none. In a six round shootout, Joe Pavelski scored on the Sharks’ first shot, while Joonas Donskoi scored on their sixth. For the Ducks, Rickard Rakell scored with a reaching backhand.

Up Next
The Sharks next play on Wednesday against the Tampa Bay Lightning. Puck drop at 7:30 p.m. PT.