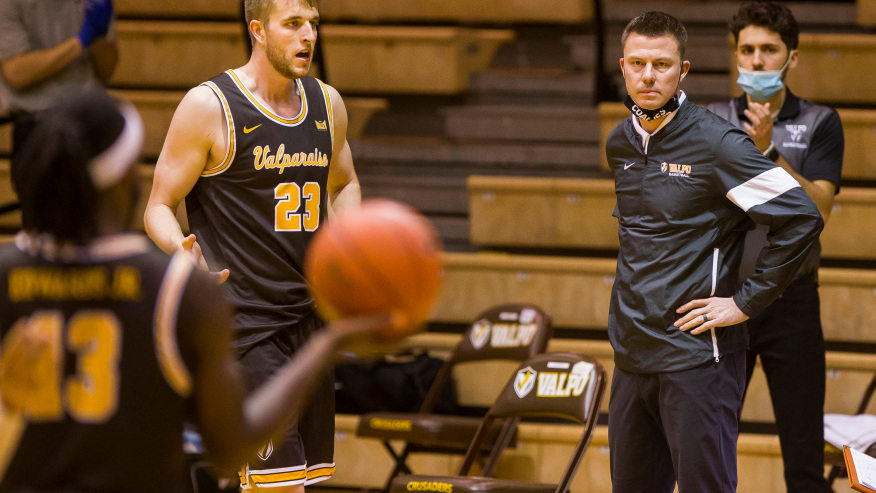 Valparaiso Crusaders head coach Matt Lottich (right) with Sheldon Edwards (13) and Ben Krikke (23) come back to the bench during a time out in their game against Drake on Sun Feb 7, 2021. The team name Crusaders, logo, and mascot are being done away with. (AP News photo)

On the NCAA basketball podcast with Michelle:

#1 Michelle, Indiana University Valparaiso said it’s changing the name from Crusaders to something else. The University is made up of Lutherans and the student president Kaitlyn Stienhiser said the Crusader name doesn’t represent the core values of the university and that logos, the nickname, the mascot will all have to go.

#2 Former Rutgers Scarlet Knights basketball player Logan Kelly 26 was arrested for murder. Kelly is accused of slashing a Tijuana night club employee’s throat. Kelly had walked up behind the employee and killed the woman. He was detained by club employees and arrested. The woman was 19 years old. Kelly played for Rutgers during the 2012-2013 season.

#3 NAIA school Bluefield College in Virginia had it’s game forfeited by the university’s president David Olive because the players were taking a knee during the national anthem. Olive who is white ordered the players to stop taking a knee before the anthem and suspended all players involved in the kneeling saying they were disrespecting the flag, the country and the military veterans.  Olive said he supported their message but didn’t want them taking a knee before games. There could be some political blow back for Olive here.

Join Michelle for the NCAA basketball podcasts each Sunday night at http://www.sportsradioservice.com

The Baylor Bears Davion Mitchell (45) battles for the lane against Auburn’s Bubatunde Akingbola (13) during the second half of Sat Jan 30, 2021 in Waco TX (AP News photo)

On the NCAA podcast with Michelle:

#1 No.1 ranked Gonzaga (17-0) bested Pepperdine (7-8) on Saturday night with a convincing 97-75 win. The Zags Drew Timme scored 19 points and Corey Kispert right behind Timme with 16 points.

#3 Rutgers senior guard Geo Baker has reached the end of his rope with the way the NCAA treats it’s athletes and said that the NCAA’s treatment of the players is a “modern day slavery” on Instagram. Baker said in one Instagram post that the players are in a bubble and they can’t visit their girlfriends and family but they can’t sell their own jerseys or keeping the rights to their likeness.

Join Michelle Sundays for the NCAA basketball podcasts at http://www.sportsradioservice.com