SANTA CLARA, Calif — The Green Bay Packers came to Levi’s Stadium last season and were defeated handily, including a 17-point loss in the NFC Championship Game in January.

Things were totally different this time around, as the Packers came into an empty Levi’s Stadium and defeated the injury-plagued 49ers 34-17 Thursday night in front a nationally televised audience.

The loss drops San Francisco to 1-4 at home this season.

Packers quarterback Aaron Rodgers dissected the 49ers, completing 26 of 31 passes for 305 yards with four touchdowns and no interceptions with a passer rating of 147.2 in the game.

Rodgers put the Packers up 7-0 on their opening drive of the game with a beautiful 36-yard touchdown to wide receiver Davante Adams’ back-shoulder down the left sideline beating 49ers cornerback Emmaunel Moseley. The score capped off a six-play, 75-yard drive for the Packers, who are the only team this season to score on all of their opening possessions.

Adams finished with 10 catches for 173 yards and a touchdown.

Following a 22-yard Robbie Gould field goal to cut Green Bay’s lead to 7-3, Rodgers added his second touchdown of the game on a 1-yard toss to a wide open Marcedes Lewis to push the Packers lead to 14-3 midway through the second quarter. The tight end was left uncovered in the end zone by a 49ers defense that had trouble applying pressure to Rodgers.

With the 49ers at midfield on the ensuing drive, quarterback Nick Mullens throws a terrible pass in the flat intended for running back Jerick McKinnon that was intercepted by safety Raven Black. Black’s interception would setup Rodgers’ third touchdown in the first half, a 52-yard bomb to a streaking Marquez Valdes-Scantling down the middle of the field putting the Packers up 21-3 shortly before halftime. Valdes-Scantling was able to race by safety Marcel Harris and Rodgers dropped the football in his lap.

In the second half Rodgers would pick up where he left off, connecting with Valdes-Scantling again on a 1-yard score to put the Packers ahead comfortably 28-3. It was Rodgers’ fourth score of the game and Valdes-Scantling’s second touchdown on the night.

Rodgers would retreat to the bench in the fourth quarter with the Packers comfortably ahead, 34-3 and replaced by rookie Jordan Love.

Running back Aaron Jones, who was questionable coming into to the game with a calf issue, rushed for 58 yards on 15 carries and hauled in five catches for 21 yards.

For Mullens and the 49ers (4-5): they got sledgehammered by a better team and quarterback tonight.

Mullens, who also lost a fumble, completed 22 of 35 for 291 yards and a touchdown in his first start for San Francisco since Week 4’s 25-20 loss to the Philadelphia Eagles. Aside from the two turnovers by Mullens, he connected with wide receiver Richie James for a 41-yard touchdown down the right sideline to make the score 34-10 with five minutes left in the game.

James took full advantage of the 49ers’ shortage of wide receivers, posting nine catches for 184 yards and a touchdown. It was the most yards for James in either of his first two seasons in the league (130 yards in 2018, 165 yards in 2019).

After allowing Minnesota Vikings running back Dalvin Cook to rumble for 163 rushing yards and four touchdowns on 30 carries, Green Bay held San Francisco to just 55 yards on the ground. McKinnon led the 49ers with 52 yards on 11 carries and a late touchdown.

Defensively for San Francisco, it was the second-straight week surrendering 30+ points and four touchdown passes in a game.

The NFL’s sixth-ranked defense allowed 405 yards of total offense to Rodgers and the Packers after allowing 350 yards to the Seattle Seahawks and Russell Wilson in Week 8’s 37-27 loss.

And it doesn’t get any easier as they will face future Hall of Famer in Drew Brees and the Saints in New Orleans in Week 10 on Nov. 15.

Middle linebacker Fred Warner led the 49ers with a 13 tackles, while fellow linebacker Dre Greenlaw and safety Jaquiski Tartt finished with seven tackles each. Tartt left the game shortly before halftime with a foot injury. Although he was listed as questionable to return to the game, Tartt was ruled out in the third quarter.

Tartt was in his first game back after missing the last three games with a groin injury. 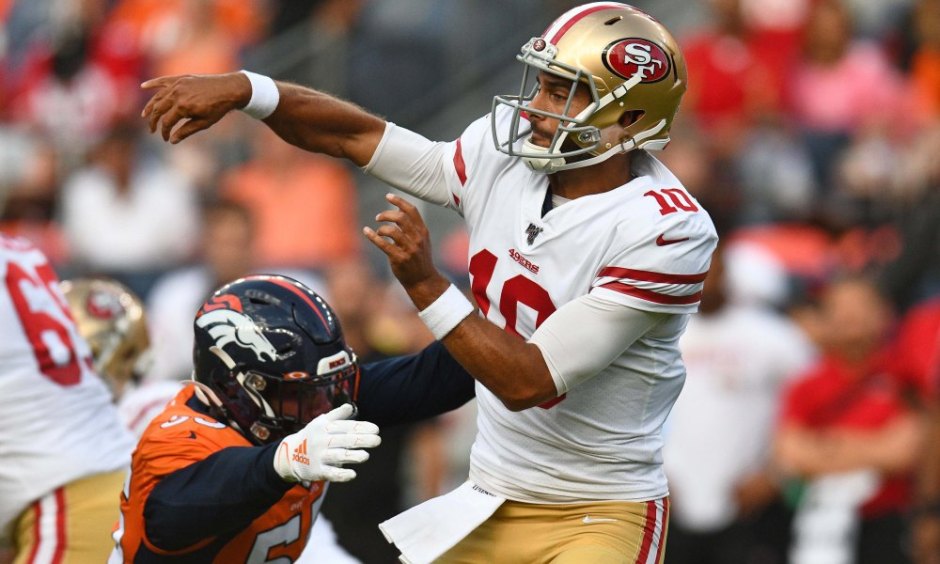 Jimmy Garoppolo fell flat in his much-anticipated return to the football field on Monday night versus the Broncos. Garoppolo started the first three drives and looked flat-out terrible. He finished 1-of-6 for zero yards with one interception and a 0.0 QB rating. On top of the pick and sack, Garoppolo had two balls batted down at the line and should’ve thrown a second pick that was dropped.

The good news is it’s early. Garoppolo hasn’t played any meaningful football since week three of last season and was obviously not comfortable on Monday. Looking skittish and nervous in the pocket, Garoppolo still has a long way to go before he’s close to where he needs to be. Saturday will be huge for his development and confidence as he gears up for the season.

Garoppolo also didn’t great offensive line helped, as the Broncos front seven got in Garoppolo’s face on half his throws. Bradley Chubb picked up two QB hits, including one on the interception that made Joe Staley look silly.

Aside from Garoppolo, the Niners looked pretty good overall in the 24-15 victory. They rushed for a combined 185 yards but only passed for 85. Raheem Mostert was noticeable finishing with 58 yards on six carries.

Deebo Samuel once again flashed his top speed on a 45-yard sweep play, bringing the ball within the one; setting up a touchdown. NFL NextGen clocked him in at 20 MPH, matching Tyreek Hill’s average speed.

The defense continued to bend and not break and allowed their first touchdown of the preseason with only eight seconds remaining. DJ Reed and Jaquaski Tartt looked excellent in the secondary. Reed finished with six tackles, a pass deflection, and QB hit; while Tartt had five tackles, two for loss, and a breakup. As a team, San Francisco had five sacks and forced a turnover.
Battle for Backup

The backup race still remains intriguing. CJ Beathard earned the majority of the snaps on Monday; completing 5-of-11 for 81 yards, marching the Niners to two of their three touchdowns. Mullens completed 2-of-3 passes for 27 yards and a touchdown pass to Kenrick Bourne on a fade.

Richie James Jr. is starting to make his case for the 53-man roster. While he hasn’t added a ton on offense, his return ability should be admired. He picked up 80 yards on two returns, including a 48-yarder.