After concluding a two-game road trip, the Oakland Raiders will return home this week to welcome in their divisional rival the Kansas City Chiefs at the Oakland-Alameda County Coliseum. Sunday’s Week 13 meeting between these two AFC West foes will mark the first of two meetings in four weeks, with the Raiders wrapping up the season in Kansas City in Week 17.

Last week, the Raiders (2-9) lost on the road to the Baltimore Ravens 34-17. Raiders quarterback Derek Carr completed 16-of-34 passes for 194 and one touchdown. For the second-straight week, the Raiders scored a touchdown on their opening drive, a 1-yard score by running back Doug Martin, his first in Silver and Black. Martin rushed for 51 yards on 11 carries (4.6 yards per carry) and also added three catches for 21 yards.

Tight end Jared Cook tied his career-high with his fifth touchdown grab of the year in the third quarter of the game. Cook finished with two catches for 32 yards and the score.

Kansas City holds the AFC’s best record at 9-2 and sit atop the AFC West. The Chiefs are coming off their bye week but lost their most recent game, 54-51 to the Rams in Los Angeles on Monday Night Football.

The Chiefs have on of the league’s most prolific offenses, ranking second in points per game (36.7), third in total yards per game (434.3) and passing yards per game (318.5) and second-year quarterback Patrick Mahomes is a big reason why the Chiefs put up astronomical numbers every game.

In his first full season as the Kansas City’s starter, Mahomes leads the NFL in touchdown passes (37) and is second in passer rating, a blistering 117.9.

Hunt is also tough to defend in the passing game, with 26 catches for 378 yards and seven touchdown catches this season.

Following Sunday’s game, the Raiders will face another tough test when they host the Pittsburgh Steelers. Kansas City returns home to take on the Baltimore Ravens in Week 14. 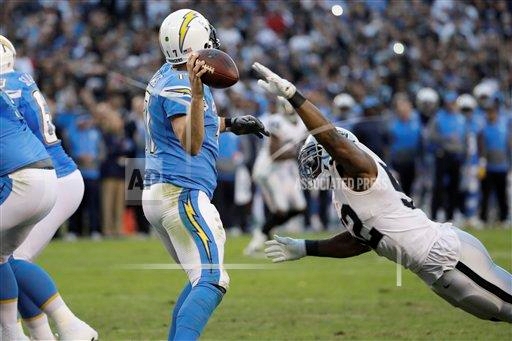 The 2017 Pro Bowl will be held at Camping World Stadium in Orlando, Florida on Sunday, Jan. 29. Oakland’s seven players selected were the most selected from one team, with the Atlanta Falcons second with six players selected to the NFC squad.

Oakland (11-3), who clinched their first trip to the playoffs since 2002 with a 19-16 win in San Diego Sunday, hope that none of their players play in the NFL’s All-Star Game as they could be preparing to play for the Vince Lombardi Trophy in Super Bowl LI on Sunday, Feb. 5 in Houston, Texas at NRG Stadium.

Carr is having  career-year and is one of the favorites for the NFL’s MVP Award, throwing for 3,705 yards, 25 touchdowns and six interceptions. The third-year signal caller has a 95.2 passer rating while engineering the NFL’s third-ranked scoring offense at 26.9 points per game.

Cooper is just finding his way in the league in only his second season out of Alabama, surpassing the 1,000-yard receiving mark for the second straight season with 1,038 receiving yards this year. Cooper recorded 1,070 receiving yards in his rookie season last year.

Mack, who had his streak of consecutive games with at least one sack snapped at eight in San Diego, is tied for fourth in the league with 11 sacks. No matter what sports page or blog you read, or sports talk show you watch and listen to, Mack’s name is mentioned as a strong candidate to win the Defensive Player of the Year Award.

Left tackle Donald Penn, left guard Kelechi Osemele, and center Rodney Hudson were selected from the AFC’s best offensive line that has only gotten Carr sacked a league-low 15 times this season. This is Penn’s second Pro Bowl nod, while this is the first selection for both Hudson and Osemele.

The Raiders sent six players to last year’s game, with Mack, safety Charles Woodson, and fullback Marcel Reece being voted on the first ballot before Carr, Cooper, and running back Latavius Murray were selected as alternates.