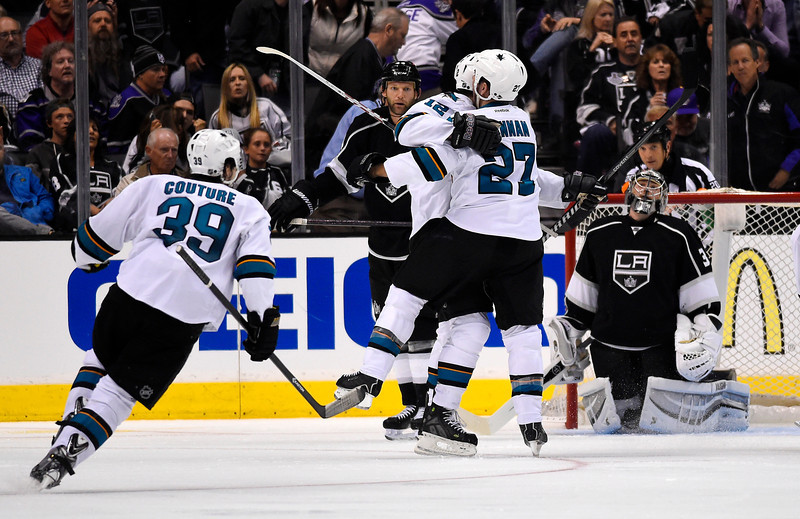 LOS ANGELES– Patrick Marleau scored his third playoff goal in Game 3 of this series to lead San Jose to a 3-0 series advantage with a 4-3 win over the Los Angeles Kings Tuesday.

Up until the Sharks’ win, the Kings had won all of their playoff games at home since June 11, 2012.

Besides two straight Los Angeles goals, the scoring went back and forth.

Marleau was aided by Scott Hannan at 6:20 in this much tighter game than the previous two. The goal was their only shot in overtime. Goalie Antti Niemi is now 12-2 in OT careerwise in the playoffs.

Teammate Logan Couture commented on overtime, “…they really took it to us for the first five minutes of that overtime, then we got a lucky bounce and that’s the way things go sometimes.”

On their second shot of the game and 11 seconds into their power play, San Jose’s Brent Burns scored at 3:16 of the first, helped by Joe Thornton and Dan Boyle.

The shot on goal margin for the Kings increased to 7-2, but they could not get the puck in the right spot.

The Sharks paid for a puck over the glass penalty by Jason Demers at 3:23 of the second. Los Angeles’s Tyler Toffoli was able to pass the puck just past Tommy Wingels, and Jarret Stoll shot right away to even the game at 1-1 at 4:48. Drew Doughty also assisted on the play.

The Kings’ Marian Gaborik then single-handedly intercepted one of the passes on his teams’ side and turned it into a 3 on 2 man advantage and goal at 7:59 for the 2-1 lead.

It was short-lived though. Marleau fished the puck out from alongside the boards and passed it to Jason Demers near the blue line. Demers then aimed at the net and Long Beach native Matt Nieto tipped in the puck, to even the game back up at two at 9:17. It was Nieto’s first career playoff goal.

Los Angeles got their fourth power play when James Sheppard was called for tripping. San Jose put the puck over the glass again, but the referees did not make the call.

The other half of Sheppard’s power play continued in the third. Seven seconds before it expired, Jeff Carter had a tip-in from Anze Kopitar and Doughty.

It took more than two power play opportunities following that goal, but three seconds after the second one at 9:17, Sharks’ rookie Tomas Hertl put the loose puck in, persisting several times after it went off goalie Jonathan Quick. Overall in the period, San Jose outshot the Kings 23-8. Hertl was aided by Wingels and Marc-Edouard Vlasic.

Game notes: The Sharks go for the sweep at Staples Thursday at 7:30pm.