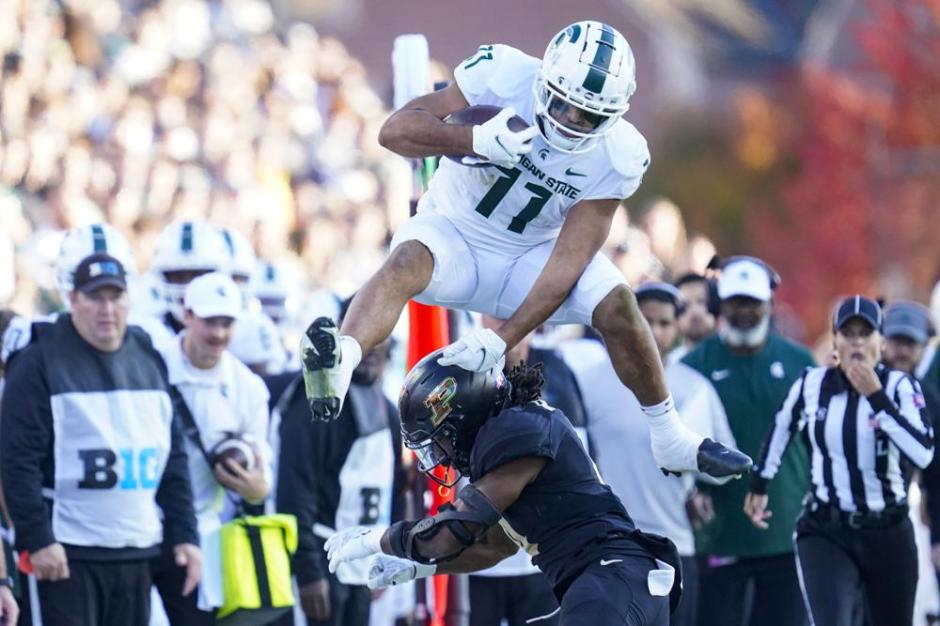 Michigan State Spartans running back Connor Heyward (1) takes a leap of faith over the Purdue Boilmakers safety Marvin Grant (4) during the first half on Sat Nov 6, 2021 at West Lafayette (AP News photo)

#1 Purdue Boilermakers (6-3) upsets No.3 Michigan State Spartans (8-1) with a 40-29 win on Saturday the Boilermakers quarterback Aidan O’Connell threw for 536 yards and three touchdowns. The loss was the Spartans first loss of the season Boilermakers and running back Kenneth Walker carried for 146 yards and one touchdown.

#2 Nov 6. Cincinnati Bearcats remain undefeated (9-0) with a 28-20 win Saturday against the Tulsa Golden Hurricane. There were two fumbles near the goal line and Cincinnati was able to keep things in check for the win. Bearcats quarterback Desmond Ridder 15-23 for 274 yards and two touchdowns.

Join Michelle Richardson for the NCAAF podcast Sundays at http://www.sportsradioservice.com 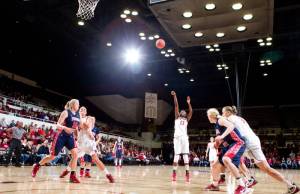 Stanford started their week in Mexico with a win against Purdue on Tuesday.  The Cardinal took on the Boil Makers as part of the Hardwood Tournament of Hope. This is the first time that Stanford has played a regular season matchup outside of the United States, they have played tournaments in Alaska, Hawaii and even the Virgin Islands, but never outside the United States.  Purdue was coming into the contest with a perfect record of 4-0 and the rank of the 16th best team in the country.

Stanford beat Purdue by the final score of 86-69.  With the win, Stanford is now 1-1 against ranked opponents, with the only loss of the season coming to number one ranked Connecticut.  The Cardinal had the five-point lead going into the half, and were able to extend the lead to 17 by the end of the game.

Chiney Ogwumike lead the team once again with 22 points.  For the second straight game she was unable to record a double-double.  This was after she started the season with four straight.  The Boil Makers held Ogwumike to eight rebounds.

Guard, KK Houser had a great game for Purdue, she led the Boil Makers with 20 points in the 31 minutes she played.  Courtney Moss had 12 points herself and was the only other player for Purdue to get to double-digits in scoring.

The win for Stanford gives head coach, Tara VanDerveer, win number 899 in her career.  “I know that everyone keeps reminding me of it (win #900), but I look at it as Florida Gulf Coast is our next opponent and we are going to watch video on them tonight and prepare for them like any other game” said VanDerveer on not looking to far ahead towards win 900.

Stanford will try to get VanDerveer win number 900 on Wednesday, as they continue their play in Puerto Vallarta where they take on Florida Gulf Coast.