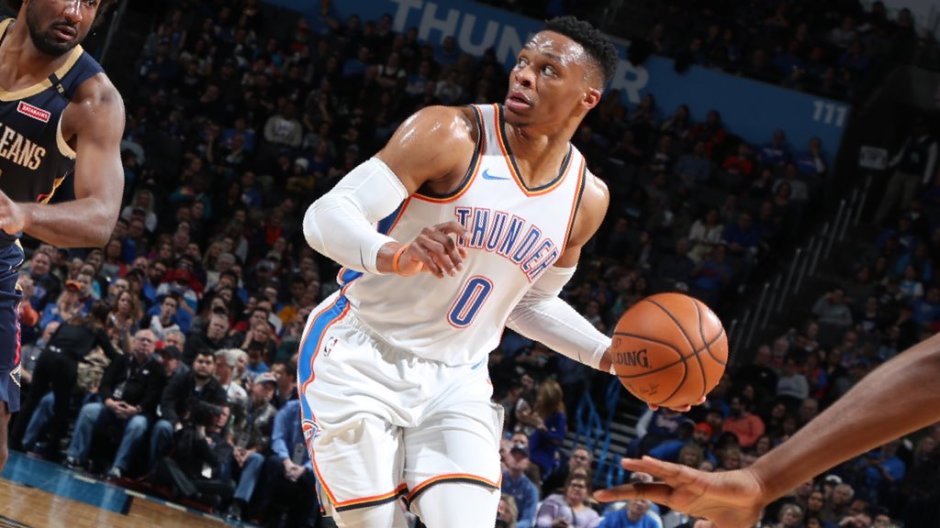 On the NBA podcast with Jerry:

#1 The Oklahoma City Thunder got offensive help from Russell Westbrook and Paul George. Both scored 23 to lead the Thunder over the New Orleans Pelicans 122-116.

#2 Damian Lillard led the Portland Trailblazers with 24 points as the Blazers defeated the Phoenix Suns 120-106. A big road win for the Blazers in the Valley of the Sun.

#3 The Washington Wizards got rolled by the Golden State Warriors 126-118 in the nation’s capital. The Warriors’ Stephen Curry led with 38 points.

#4 Minnesota vs. LA Lakers: Karl Anthony Towns scored 27 points and had 12 rebounds in the Minnesota Timberwolves win over the Los Angeles Lakers on Thursday night 120-105.

Jerry is a Golden State Warriors beat writer and does the NBA podcast each Friday at http://www.sportsradioservice.com

In a fight for the eight and final spot in the Western Conference, the Russell Wilson led Oklahoma City took down the depleted Sacramento Kings with a 116-103 final to keep their playoff dreams alive.

With both Kevin Durant and Serge Ibaka still ailing, it was up to Westbrook to lead the Thunder’s charge. The dynamic young point guard didn’t disappoint, dropping 27 points while dishing 10 assists against a Sacramento team still missing both DeMarcus Cousins and Rudy Gay.

But Westbrook wasn’t alone in his charge, as a slew of supporting characters on the Oklahoma City roster helped him out with a balanced scoring attack. Alongside Westbrook, fellow starters Enes Kanter and Dion Waiters finished with over 20 points on the night, while Anthony Morrow provided 19 off the bench.

But despite what the final 13 point deficit might suggest, the Kings did not make it easy for the Thunder to grasp the victory. After being up as many as 13 points in the first half, the Kings battled back to head into the final frame with just a six point deficit. However, the Thunder would not relinquish their grip on the lead, and would outscore Sacramento by seven points in the fourth to hold on for the win.

Like the Thunder, the Kings scoring attack was fairly balanced, with Ben McLemore leading the team with 20 points on 8-of-17 shooting. He was followed by Omri Casspi, Ray McCallum and Derrick Williams, all of whom finished with 15 points or more on the night.

The Kings have now lost 7 of their last 8 games while clearly missing their top two scorers in Gay and Cousins. They still have three games left in order to finish the season on a high note by concluding their road trip at Denver before heading home to face the Lakers for their final home game of the season on Monday. They will then travel to Los Angeles to take on the Lakers yet again to play their season finale on April 15.