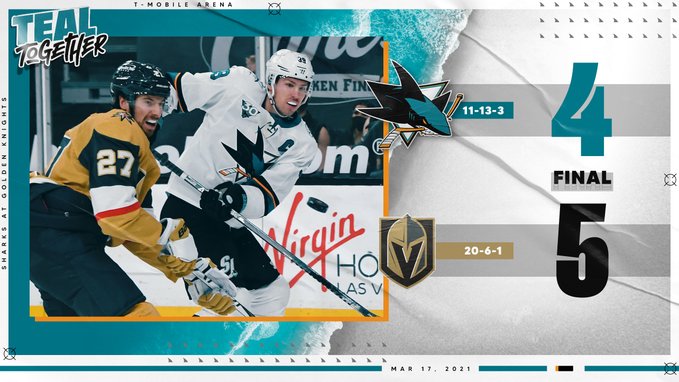 The Sharks went into the third period with a 3-1 lead, but gave up four goals in the final frame. After the game, Sharks Head Coach Bob Boughner talked about how the game came undone:

“I think we pissed away a couple points. You know, the game got emotional and intense and physical, and I didn’t mind that at all. I think we did a good job sticking up for each other, those are things we want to keep doing. A little tough there when we lost [Couture], Hertl and Timo got called off the bench for concussion protocol after that hit all at the same time so we started juggling lines.”

Boughner did not consider that the real turning point. Rather, it came before that: “They didn’t have much going on the first six, seven minutes of that period and we had a horrible, horrible too many men call.”

Sharks Captain Logan Couture explained how it felt to let the game get away from them in the third:

“We played better. Should have won tonight, gave away points, so I mean it sucks to take away the moral victory in a game like this when you need to win and should have won. We’re in a position to win in the third period so, shitty feeling right now.”

Shea Theodore started the scoring at 3:45. Max Pacioretty gathered up an offensive zone turnover and passed it to Theodore at the point. Theodore’s slapshot sailed by Dubnyk, who may have been screened by some traffic.

San Jose took three penalties in the first period and their penalty kill allowed four shots. On the power play, they had three shots. For the period, the Sharks led in shots 11-10.

Matt Nieto got the Sharks on the board at 6:21. Timo Meier sent a pass from the goal line right onto Nieto’s stick by the blue paint. Assists went to Meier and Tomas Hertl.

The Sharks took a lead at with a goal from Mario Ferraro at 7:57. John Leonard’s shot went off of the post before Ferraro coraaled it behind the net and wrapped it around behind Fleury. Assists went to Leonard and Evander Kane.

Ryan Reaves put the puck in the net for Vegas at 11:00, but William Carrier was on top of Dubnyk when the puck went in. The Sharks challenged the goal and, after a review, it was called back for goaltender interference.

Kevin Labanc scored the Sharks’ third of the night at 15:07. Evander Kane attempted to deflect a shot from Ferraro on the blue line. When that didn’t go, he found it again and swept it in front of the net for Labanc to put away. Assists went to Kane and Ferraro.

The Sharks achieved their second period goal of avoiding penalties and the only one went to the Golden Knights. They outshot the Golden Knights 16-11 in the period, but did not get any shots on their power play.

Cody Glass scored for Vegas on the power play at 6:43 of the third period. John Leonard was in the box because his team was caught with too many men on the ice. The puck actually went off of Mario Ferraro’s skate. Assists went to Shea Theodore and Mark Stone.

Tomas Hertl and Mark Stone came to blows in front of the Sharks net moments later. Stone had delivered a hit on Timo Meier in the neutral zone. Meier was called away form the game for concussion protocol. That was Hertl’s first NHL fight.

Nicolas Hague tied the game at 10:03 with a shot right down the slot from the blue line. The assists went to Jonathan Marchessault and William Karlsson.

Logan Couture and Jonathan Marchessault fought shortly after that goal. That left the Sharks without Meier, Hertl of Couture for several minutes.

Ryan Reaves gave Vegas the lead at 12:27 with a deflection that bounced past Dubnyk. Assists went to Tomas Nosek and Zach Whitecloud.

Alec Martinez scored what would be the game winner at 14:46, on another power play. Labanc was in the box for tripping. the Sharks were just eight seconds away from killing the penalty when Tomas Nosek made a pass across the ice to Martinez. Assists went to Nosek and Theodore.

Evander Kane brought the Sharks back within on goal at 15:54 with a power play goal. Erik Karlsson took a shot from the point. Kane was there to battle for the rebound and tuck it in.

Vegas outshot San Jose 16-6 in the third period. The Sharks got two shots in on their one power play and the Golden Knights got seven shots in two power plays.

The Sharks won just 45% of the face-offs in the game. Of skaters to take more than five draws, only Logan Couture won more than 50%.

The Sharks next play on Friday against the St. Louis Blues at 6:00 PM PT, back in San Jose.