On the Headline Sports podcast with Barbara Mason:

#1 After Big Papi’s shooting, will other Latin players now be worried and concerned about having to go home for the winter?

#2 It really gives pause for other MLB players who might live in the Dominican Republic, and giving what just happened, they may have to change their habits from going out in public?

#3 The Los Angeles Dodgers and San Francisco Giants rivalry continues last Sunday. The Dodgers’ Max Muncy opened the first inning with a home run and took a long look, which irked Giants pitcher Madison Bumgarner and set off some jawing between Bumgarner and Muncy. The Giants open a three-game series with San Diego tonight.

#4 The Boston Bruins saved their season with a convincing win over the St. Louis Blues 5-1 in Game 6 on Sunday in St. Louis that saved the Bruins from elimination.

#5 Oakland Raiders defensive coordinator Paul Guenther, who coached defense that allowed the most points in Raiders history (457). That was what Guenther said his hardest year in coaching.

Headline Sports and is a freelance writer for Area Grande Spanish papers with Barbara is heard every Tuesday night at http://www.sportsradioservice.com

photo from lohud.com: Blues players celebrate a goal in the third period of Game 5

On the NHL Stanley Cup Finals with Daniel:

Daniel Dullum did the NHL podcasts weekly at http://www.sportsradioservice.com 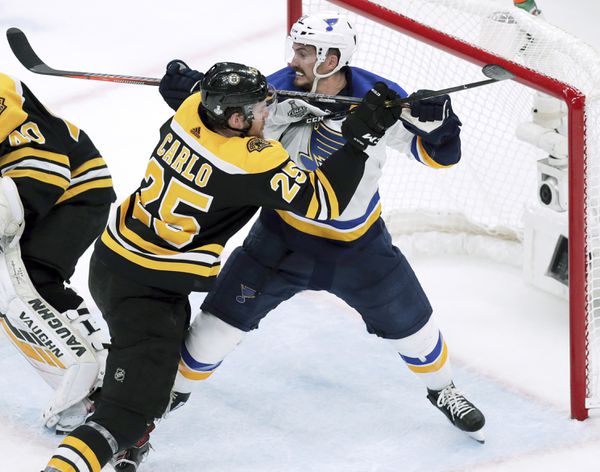 On the NHL Stanley Cup Playoffs podcast with Matt:

#1 The St. Louis Blues who are the front runners in the series now evened the series twice in Games 2 and 4. They are certainly aware of the surroundings on the ice and on the series scoreboard too.

#2 Taking a look at some of the key players in the series thus far starting with the Boston Bruins’ Brad Marchand in the postseason with eight goals, 13 assists, and 21 points, David Pastrnak with eight goals, nine assists, and 17 points, just two of the many talented players on the B’s who are now trying to solve the Blues at this time.

#3 Matt talks about St. Louis goaltender Jordan Binnington. While he had a rough Game 3 in which the Bruins beat up on the Blues 7-2, Binnington had two great back-to-back games in Games 4 and 5.

#4 The Bruins are just one game down 3-2 in the series. Do the Bruins feel they’ve got their backs to the wall in an elimination game in St. Louis in Game 6 on Sunday night?

#5 The Blues won two one-goal games in this series. That tells you also a little about their defensive prowess.

Today’s podcast: Coverage on the San Francisco Giants and ways they need to get out of the cellar in the National League West; the Oakland A’s put together one of baseball’s most exciting win streaks with 10 consecutive wins in May, the NHL Stanley Cup Finals with the Boston Bruins and St. Louis Blues. The Bruins took Game 1 in a two-goal 4-2 win, but on last Thursday night, the Blues got by the Bruins 3-2 to tie the series up. The Bruins came back in game 3 on Saturday with a walloping 7-2 win to take the series lead 2-1. The Blues took game 4 on Monday night with a 4-2 victory over Boston to tie the series 2-2. The Bruins Zdeno Chara took a puck to the face and his status is unknown. The Bruins have home ice for game 5 on Thursday. The Golden State Warriors and the Toronto Raptors played to a 1-1 series tie on Sunday and return back to Oakland on Wednesday, June 5th for game 3.

Our thanks to our hosts at Harborview Restaurant and Bar Kinson Wong (Owner) and Karen Liu (Director of Marketing and Special Events) for hosting Sportstalk and we can say unequivocally one of the finest Chinese cuisine restaurants in San Francisco. Please come and enjoy the fine food, dinning and atmosphere at Harborview.

Harborview Restaurant & Bar was founded in 2018 by a team of culinary and hospitality professionals led by Kinson Wong (original Co-Founder and co owner of R&G Lounge), with the vision to elevate the caliber of authentic Cantonese-style Chinese cuisine in the San Francisco Bay Area.

Harborview presents delicious menu offerings in an elegant yet unpretentious setting, with gorgeous panoramic views of the San Francisco Ferry Building and Bay Bridge. We strive to be a “must visit” San Francisco Chinese restaurant for guests visiting from locally, regionally and abroad.

Welcome to Harborview in San Francisco!

photo from wsoctv.com: One of seven Boston Bruins goals on Saturday night in St. Louis leaves the Blues goaltender Jordan Binnington laid out in front of the net as the Bruins move ahead 2-1 in the Stanley Cup Finals.

On the NHL Stanley Cup Finals podcast with Daniel Dullum

1 Stanley Cup Finals: Bruins in front 2-1, the Bruins got a 7-2 win in Game 3 on Saturday night. Meanwhile, back in Game 2, the Blues did get a historic win.

missourinet.com photo: The St. Louis Blues’ Oskar Sundqvist puts the hit on the Boston Bruins’ Matt Grzelcyk in Game 2 in Boston, resulting in a one-game suspension for Sundqvist.

On the NHL Stanley Cup Finals podcast with Matt:

#1 Matt talks about St. Louis Blues forward Oskar Sundqvist, who was suspended for a game for his elbowing the Boston Bruins’ Matt Grzelcyk.

#2 Was the suspension of Sundqvist justifiable and with Sundqvist out of the lineup. how much of impact is that for the Blues?

#3 Blues captain David Backes said that at this rate if this keep up there won’t be any defensemen left. “It’s from behind, elevated, into his head, into the glass. If that’s a two-minute penalty, I think there’s going to be a shortage of defensemen in this series by the end of it. That’s in somebody else’s hands. That’s something I think if I’m making that hit, I’m probably watching from the bleachers for a few.” said Backes.

#4 Will the Bruins come out in Game 3 fired up because of the hit on Grzelcyk or will they be satisfied with the league decision to suspend Sundqvist?

Join Matt for more coverage of the Stanley Cup Finals next Saturday at http://www.sportsradioservice.com

boston.com photo: Oskar Sundqvist of the Blues knocked Bruins defenseman Matt Grzelcyk out of Game 2 with a first-period hit from behind.

On the Stanley Cup Finals podcast with Joe:

#1 The Blues and Bruins are tied. The way the Bruins came out, it looked like they would dominate, but in Game 2, the Blues got by in overtime 3-2. Do you see this one being an up and down game?

#2 Carl Gunnarsson got the game-winner on a delayed penalty at 3:51 in the OT that gave the Blues the gamer.

#5 The victory for the Blues in Game 2 was St Louis’ first win in 14 tries in Stanley Cup Final games.

#6 Joe sets up game three for us as the next two games are in St Louis starting on Sunday.

Joe Lami does the NHL Stanley Cup Finals podcasts each week at http://www.sportsradioservice.com

#1 The San Francisco Giants have now lost six straight games. The latest loss was on Tuesday night in Miami where they were crushed by the hosts, the Miami Marlins, 11-3. The Marlins did most of their damage with four runs in the fifth and three runs in the sixth.

#2 The Oakland A’s gave it their all, but couldn’t get their 11th straight win as the LA Angles scored twice in the top of the ninth to get a two-run lead over the A’s at the Oakland Coliseum in a 6-4 Angels win. The A’s took another loss for the second straight loss to the Angels on Wednesday afternoon 12-7 in extra innings.

#3 The San Jose Earthquakes are 5-2-6. They have won three out of their last four games and are on the road to face the DC United. The Quakes have a confidence about them that you didn’t see before.

#4 The NBA Finals are coming on Thursday night. The Toronto Raptors and the Golden State Warriors will battle in Toronto in Game 1 of the NBA Finals.

#5 The Boston Bruins and St Louis Blues played some old fashion physical hockey in Game 1 on Monday night at TD Waterhouse Garden. The Blues were up by two goals until the Bruins’ Sean Kuraly scored a third period goal to snap a tie and assisted on another goal to help the B’s get a 4-2 win. The Blues and B’s battle again tonight in Boston for Game 2.

London does Headline Sports each week at http://www.sportsradioservice.com 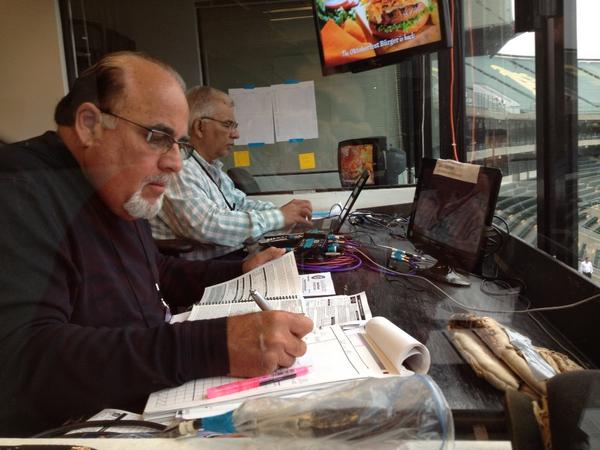