The New York Islanders celebrate their game six victory over the Pittsburgh Penguins on Wed May 25, 2021 to advance to round two as the Penguins Sid Crosby (87) skates away at the Nassau Coliseum in Uniondale N.Y. (AP News photo)

On the NHL Stanley Cup Playoffs podcast with Mary Lisa:

#1 The New York Islanders (4-2) have advanced to the next round of the playoffs with a 4-2 first round series defeat over the visiting Pittsburgh Penguins (2-4) on Wednesday night 5-3.

#2 Mary with all the talent the Penguins have on that team Sid Crosby, Evgeni Malkin, Jason Zucker, and Jeff Carter to name a few is it any surprise the Islanders were able to take the Penguins out in six games?

#4 Mary, talk about the job in net that goaltender Andrei Vasilevskiy did stopping all 29 shots to shutout the Panthers Vasilevskiy practically had to stand on his head to stop a team like that.

#5 Mary Lisa goaltender Cam Talbot of the Minnesota Wild (3-3) got a game one shutout against the Vegas Golden Knights (3-3) on Wednesday night in Minnesota 3-0. Talbot stopped all 23 shots and the Wild did all their scoring in the third period to 3-3 tie the series.

Join Mary Lisa for the NHL podcasts each Thursday at http://www.sportsradioservice.com

The Nashville Predators left winger Filip Forsberg (9) take a shot at net but the Tampa Bay Lightning goaltender Andrei Vasilevskiy (88) gets a quick glove save in the third period of Mon Feb 1, 2021’s game in Tampa Bay (AP News photo)

#1 The Tampa Bay Lightning (5-1-1) wasted no time getting on the scoreboard to defeat the Nashville Predators (4-5-0) on Monday night 5-2. The Lightning scored three times in the first period and Nashville goalie Juuse Saros took the loss facing 25 shots and saving 21.

#2 The Boston Bruins (6-1-2) down 3-1 to the Washington Capitals (6-1-3) in the third period erased the Caps lead scoring four goals to surpass Washington to get a 5-3 win at Capital One Center in DC.

#3 The Montreal Canadiens (6-1-2) are a machine after taking their first regulation loss of the season on Saturday to the Calgary Flames. The Habs got a big victory over the Vancouver Canucks (6-6-0) 6-2 at the Bell Center in Montreal. The Canadiens scored three times in each of the first and second periods.

#5 The Calgary Flames down 2-1 against the Winnipeg Jets going into the third period scored twice with Johnny Gaudreau and Andrew Mangiapane scoring a goal each to force an overtime shootout. In the shootout the Flames got two goals and the Jets one for the Flames 4-3 win.

Join Mary Lisa for the NHL podcast each Tuesday at http://www.sportsradioservice.com 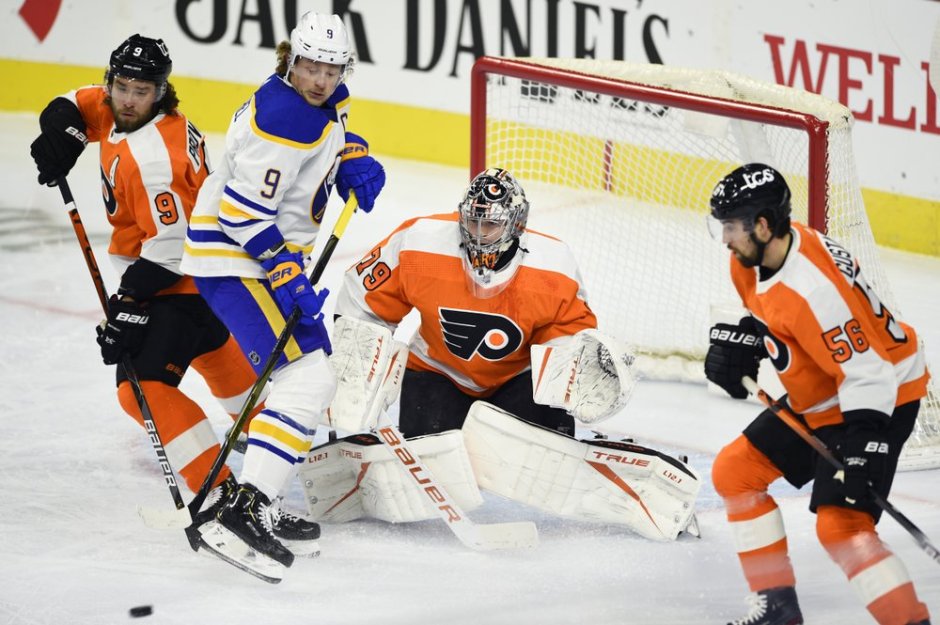 On the NHL podcast with Mary Lisa:

#1 The Philadelphia Flyers who were coming off two wins took a tough loss to the Buffalo Sabers on Monday night 6-1. The Sabers Curtis Lazar and Sam Reinhart both scored twice. The Flyers just simply could not get any semblance of offense going and Flyers goalie Carter Hart was having a tough time stopping shots facing 18-22.

#2 The Carolina Hurricanes got a two goal victory over the Nashville Predators 4-2. The Hurricanes down 2-1 came back in the third period getting goals from Vincent Trocheck, Sebastian Aho, and Nino Niederreiter.

#3 Big night for the Toronto Maple Leafs getting a 3-1 win over the Winnipeg Jets. For Toronto scoring Monday night John Taveras and Mitch Marner who scored twice in the two goal win.

#4 In a back and forth game between the San Jose Sharks and the St Louis Blues the St Louis Blues just escaped going overtime with the scored tied 4-4 and the Blues Jordan Kyrou scored the game winner at 10:28. Final was 5-4 Blues. Same two teams meet again on Wednesday night at the Enterprise Center.

#5 The Columbus Blue Jackets picked up their first win of 2021 with a 3-2 victory over the Detroit Red Wings. The Jackets scorers Oliver Bjorkstrand, Alexandre Texier, and Pierre Luc Dubois.

Join Mary Lisa for the NHL podcasts each Tuesday at http://www.sportsradioservice.com 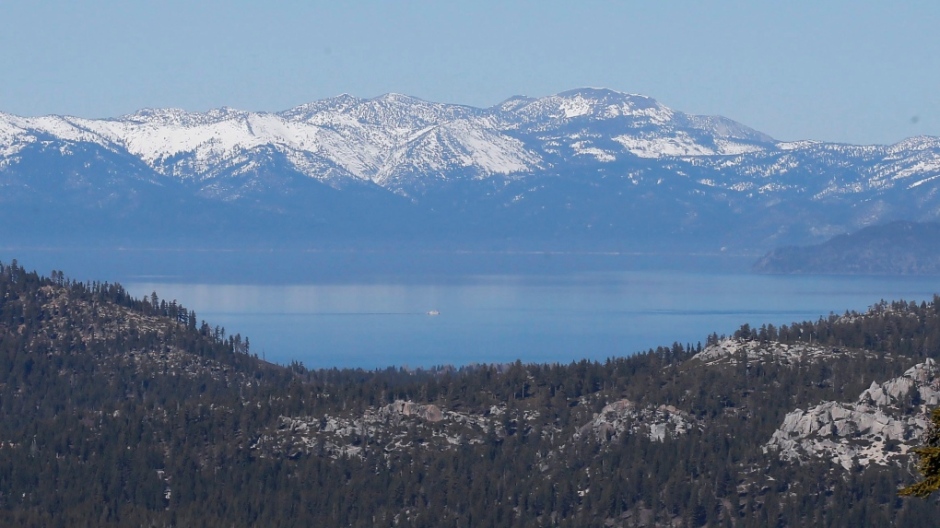 Taking in the view at Lake Tahoe where the NHL is scheduled to play featuring the Colorado Avalanche vs. Vegas Golden Knights and the Boston Bruins and Philadelphia Flyers the next day. (AP News photo)

On the NHL podcast with Mary Lisa:

#1 Mary Lisa welcome back on your first NHL podcast of the 2021 season. The NHL has plans to open the season up with outdoor hockey in Lake Tahoe. It will consist of two games that will not involve the San Jose Sharks nor fans.

#2 How ready and how good is the plan that the NHL has to make this season safe for the players. The teams will be traveling within their own divisions can they pull it off like they did in post season last year?

#3 The San Jose Sharks are opening their first ten games on the road. They’ll play two games in five different cities. Is this format a good adjustment in terms of the Sharks won’t have to play just one game and try and catch a flight but just stay in a town a couple nights before leaving for the next road game?

#4 The newest acquisition of the Washington Capital Zdeno Charo will be playing a bigger role with the Caps. Charo who left the Boston Bruins says he will get more playing time and will be able to contribute as much or more like when he was the Bruins.

#5 Mary Lisa talk about Patrick Marleau who comes back to the San Jose Sharks for third time after playing in Toronto and last season with Pittsburgh. What does his return mean for the Sharks and for Marleau personally?

On the NHL Stanley Cup Playoffs podcast with Mary Lisa:

#1 The Dallas Stars are coming off that incredible 7-3 win to clinch to advance to the second round with a win over the Calgary Flames on Friday.

#2 The Stars played the Colorado Avalanche last night in Edmonton the Avalanche came off a 4-1 series win against the Arizona Coyotes. The Aves crushed the Coyotes 7-1 in the final and fifth game in round one so the Stars will have to look for the Aves aggressive offense throughout the series.

#3 Mary Lisa the Boston Bruins are opening up a best of seven series with the Tampa Bay Lightning in Toronto tonight. The Bruins have some scorers David Krejci who lead with eight points and Brad Marchand leads Boston with three goals.

#4 For Tampa Bay Nikita Kucherov leads the Bolts in points with seven and Braydon Point with four goals all tops in the post season how do you see these players and teams matching up tonight?

#5 The Vancouver Canucks are coming off an incredible 4-2 series win against the defending NHL Champions St Louis Blues, in the final and clinching sixth game the Canucks show their offense with three goals in the second period and two goals in the third period. The Canucks Tyler Motte scored two goals to lead in scoring on Friday night. Vancouver opens up a best of seven series tonight against the Vegas Golden Knights.

Mary Lisa does the Stanley Cup Playoffs podcasts every other Sunday at http://www.sportsradioservice.com

#1 After Evander Kane came back from his three game suspension he played like his hair was on fire or better said Kane beats the Canes almost like a one man wrecking crew scoring three goals for a first period hat trick in the San Jose Sharks 5-2 victory over the Carolina Hurricanes last Wednesday night at SAP Center.

#2 The 2019-20 season didn’t get off to a great start for the Sharks or Kane, the Sharks went 0-4 and Kane had been suspended for shoving a official for three games during a pre season game.

#3 Then there was the game in Chicago on Thursday 10th and the arrival of Patrick Marleau and the Sharks were back on track with a win. The Sharks haven’t looked back since now on a three game win streak and with a shot at getting to .500 tonight in the first of a home at home series against the Buffalo Sabers

#4 Sharks head coach Peter DeBoer said that in making for a shortage of natural right wings using Patrick Marleau, on the right side with Logan Couture, and Timo Meier.

#5 The Sharks (3-4-0) like the Hurricane (6-3) will face another formidable team the Buffalo Sabers (6-1-1) will this game be looked at as another test for the Sharks and after handling one of the NHL’s best the Canes should this one go down as another team that the Sharks can handle on home ice?