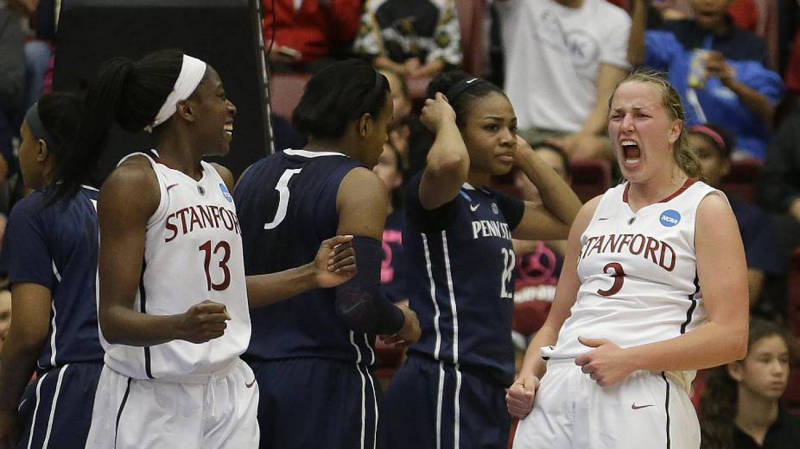 STANFORD, Calif.–The Stanford Cardinal returned to Maples Pavilion, a regional host site for this year’s NCAA Tournament, on Sunday where they took on the Penn State Lady Lions in the regional semi-final.  The Cardinal defeated the Lady Lions by the final score of 82-57.

The first half was neck and neck until about half way through.  The Lady Lions went on a 7-0 run to get ahead of the Cardinal 23-19.  The Cardinal were able to comeback with a 14-0 run of their own spanning a 5:12.  The run would end when Ariel Edwards would hit a pair of free throws.  Stanford would get five more points until the Lady Lions would be able to hit a field goal, as Edwards would nail a jumper with 2:47 remaining in the first half.  Penn State was unable to hit a field goal for 6:48 which gave Stanford a big advantage, as their lead would be 38-27.  The scoring drought would begin again until Edwards would be able to get a bucket and a foul with 13 seconds remaining in the half.  Stanford went into the halftime break with a 44-30 lead.

After much control of the first half, the second half went fairly easy for the Cardinal, as then only surrendered 27 points to cruise to victory.  The final minutes for the Cardinal allowed players that wouldn’t normally see minutes in the NCAA Tournament, as Briana Roberson, Jasmine Camp, Erica Payne and Erica McCall were able to jump in the game.

“Today was an ideal day for Stanford basketball” praised Chiney Ogwumike after the game.

Ogwumike led the way for the Cardinal once again, as she finished with 29 points.  She also added 15 rebounds to get her 25th double double of the season, and ups her career total to 83.  Amber Orrange was second in scoring for Stanford with 18 points.  Lili Thompson and Mikaela Ruef both finished the game with 11 points.  Ruef also added 13 rebounds to achieve the double double.

Edwards led the way for the Lady Lions, as she finished with 22 points.  Dara Taylor and Talia East were the other Penn St. players to get into double figures, contributing 11 and ten respectively.

The major factor in the Stanford win was allowing Maggie Lucas to only score six points.  Lucas, the Big Ten player of the year, was averaging 21.5 points per game coming into the contest.  This was only the second time this season where Lucas was held under ten points.  The last time occurred when the Lady Lions lost to Notre Dame at home on December 4.  Thompson was assigned to defend against Lucas, and she was a major factor.  “She was forced to take tough shots all night” claimed Penn State Head Coach, Coquese Washington.  Thompson later added that the key to shutting Lucas down was to limit her touches.

The Cardinal will continue their run on Tuesday with hopes of advancing to the Final Four, as they will take on North Carolina, who defeated South Carolina 65-58 in the other regional semi-final.

The Stanford Cardinal will be returning to Maples Pavilion next weekend as they will be continue on to the Sweet Sixteen, after a victory over the Florida State Seminoles on Monday afternoon.  The second-seeded Cardinal defeated the tenth-seeded Seminoles 63-44 in the second round of the NCAA tournament.

The Seminoles grabbed an early seven-point lead, as they went on a 7-0 run to start the game in the first 1:52.  It wasn’t until the 18:08 mark where Amber Orrange was able to get things started for Stanford with a field goal.  The largest lead for Florida State was stretched to eight points at the 12:31 mark, when the Seminoles had the 14-6 lead.  However, this is when the Cardinal were able to turn the game around, as Stanford went on a 26-2 run, including a 13-minute scoring drought for Florida State to end the half.  Stanford went into halftime with a 32-16 lead.

Stanford would also control the second half as well, outscoring the Seminoles by three points to complete the victory.

All-time Pac-12 leading scorer, Chiney Ogwumike, led things for the Cardinal as she finished the game 8 of 11 from the field for 21 points.  She ended the game just one rebound shy of the double double.  Lili Thompson had another outstanding performance, as she contributed 14 points in the win, including a perfect 4 for 4 from the charity strike.  Bonnie Samuelson completed the list of players that got into double figures, as she came off the bench to score 11, with nine points coming from beyond the arc.

Florida State was able to achieve something that few teams have been able to do against Stanford this season, and that is to out-rebound the Cardinal.  The Seminoles won the rebound battle  35-32 with 12 of them coming on the offensive side of the glass.  Natasha Howard, Brittany Brown and Kai James all finished the game with seven rebounds for FSU.  Howard was also the Noles leading scorer, as she finished the game with nine points.

The Cardinal will be returning to the Sweet Sixteen for the seventh time in a row, and now they will be coming back to their home floor for possibly the next two games.  Up next for the Cardinal will be the winner of Penn State and Florida, before what is expected to be an Elite Eight matchup with the number one seed in the region, South Carolina. 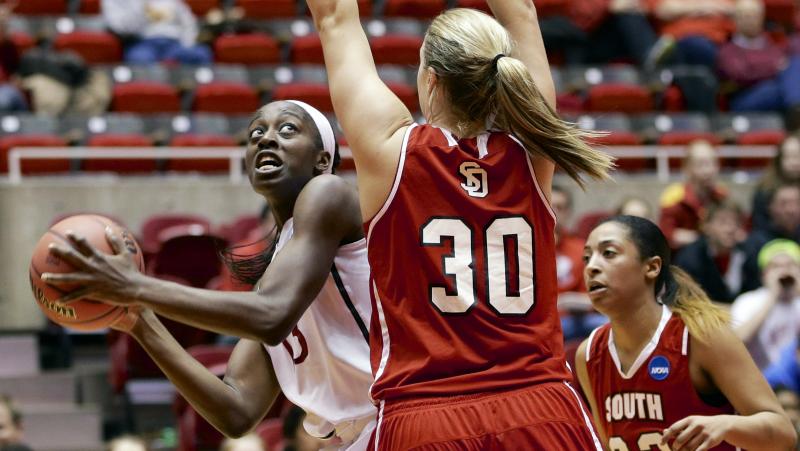 The Stanford Cardinal started what they are hoping to be a long NCAA Tournament run on Saturday afternoon with a win.  They defeated the South Dakota Coyotes by the final score of 81-62.  The Cardinal were given a number two seed after they were defeated by USC in the semi-finals of the Pac-12 tournament.  Their opponent, South Dakota, earned the 15-seed after they won the Summit Conference Tournament.  The Coyotes also had a record of 19-14 coming into the contest.

South Dakota held the game close for the first seven minutes of the game, and actually held a two point lead at the 17:56 mark, but at the 13-minute the Cardinal gained the lead and they kept it for the rest of the game.  The Cardinal led the game 42-27 going into the halftime break.  They then outscored the Coyotes 39-35 in the second half to earn the 81-62 victory.

It was a huge day for Senior star Chiney Ogwumike, as she became the all-time Pac-12 leading scorer in the contest.  She only need one-point to gain the feat, as she finished the last contest tied with Candice Wiggins.  Ogwumike finished the game with 22 points, and eight rebounds in the 35 minutes played.  She led all scorers in the effort.

Bonnie Samuelson came off of the bench to tie her career high, as the Junior Guard sunk six of ten shots from beyond the arc to net 18 points.  Lili Thompson scored 11 points and brought down six rebounds in her first NCAA Tournament contest.  She also went 50% from three-point land, as she went three of six from beyond the arc.  Amber Orrange was the other Stanford player to get into double digits in scoring, as she finished the game with ten points.

Stanford only has one more team in front of them before they can return to their home court, Maples Pavilion, as part of Regionals.  The tenth seed Florida State Seminoles will be the Cardinal’s next opponent, as they defeated Iowa State on their home floor earlier Saturday 55-44.  The Round of 32 contest is set for Monday at 3:30 PST.