OAKLAND–You will not see any baseball owners this Christmas,going through the garbage bins behind your local Safeway searching for food.

According to Forbes Magazine(the authority in financial matters), Major League Baseball established a record of over $8 billion in revenues this 2013 season.. According to this report, Major League Baseball will see revenue double for new broadcasts deals with national network partners; FOX, ESPN and TBS, that will add an additional $788.3 million a year to the league’s coffers.

Leading the way are the Los Angeles Dodgers, with the communications giant Time-Warner, with a broadcast rights deal of over 20 years between $7 to $8 billion, to be approved soon by Major League Baseball.

I know many have written the epitaph of Major League Baseball, specially since the National Football League has become the dominant league in America, but meanwhile, baseball has been prospering like never before. As a matter of fact, during the last 18 years, Major League Baseball have seen revenues grown by an incredible 264 percent.

And there could be soon another big deal if Masahiro Tanaka is available to sign with a major league club. The pitcher was 24-0 with a 1.27 earned run average starting in 27 games for the Rakuten Eagles. The amazement comes not for guys like Canó, (although I believe to give a 31 year old player a 10-year deal for that money is crazy), but for the mediocre players that have been signings very lucrative contracts.

Granted, it has become such a large business, that teams sometimes keep players whose numbers have been dwindling, just because they are drawing cards to their parks. Best example, the $35 million contract for 2 years the San Francisco Giants gave pitcher Tim Lincecum.

The popularity of Major League Baseball was also helped by the MLB Network, a 24X7 only baseball channel, that covers the game as good as anybody, during the past decade they have provided great coverage, including during the off season, but especially during the regular season, when they cut to the live broadcast from game to game around both leagues. Giving you(the fan)a live and instant look at different games, key moments on those games, and history records, as they happen.

ALAMEDA–The Oakland Raiders who suffered a pretty humilating defeat at the hands of their division rivals the Kansas City Chiefs this last weekend. They lost big 56-31 that is the most points the Raiders have ever given up in a football game. It was done in dramatic fashion the Chiefs jumped out to a big lead they were up 21-0 just in the first quarter.

The big story in the game it was not only the 56 points but who scored them, five of those touchdowns were scored by the Chiefs Jamal Charles the tiny running back for the Chiefs and four of them on receptions. He became the first running back in NFL history to catch four touchdown passes in a game.

Charles sat because the Chiefs were up by so much looking at it from the Raiders side this was a rough, rough loss, they were out of this one from the very beginning they really had no chance and what we’ve seen in the last few weeks is that the Raiders are falling apart on the defensive side of the football.

The Raiders have had a real tough time of it not only did they lose this game to the Chiefs last week they got hammered by a very bad New York Jets team they gave up 37 points to a Jets team that have had one of the worse offenses in the league. They lost to Dallas, Tennessee, you have to go all the way back to week 11 when they beat Houston and as we all know now is probably the team that’s going to get the number one pick in the draft that’s how bad they are.

The Raiders have had a really rough run it’s kind of disappointing their defense played really well in the first half of the season it was surprising and one of the reasons why everybody had low expectations for the Raiders was their defense. They’ve had a lot of new guys on the team and not necessarily all new but they had a lot of inexperienced guys some of them were rookies.

These were guys on the Raiders that have really never been starters at this top level and the Raiders had so little room under the cap they had to get what they could and for the most part that meant bargain basement shopping and early in the season they did a good job of motivating these guys in keeping offenses on their toes, the defense was surprising.

The Raiders face the San Diego Chargers on Sunday the 29th for their next game with a 1:25 PM kickoff at Qualcomm. 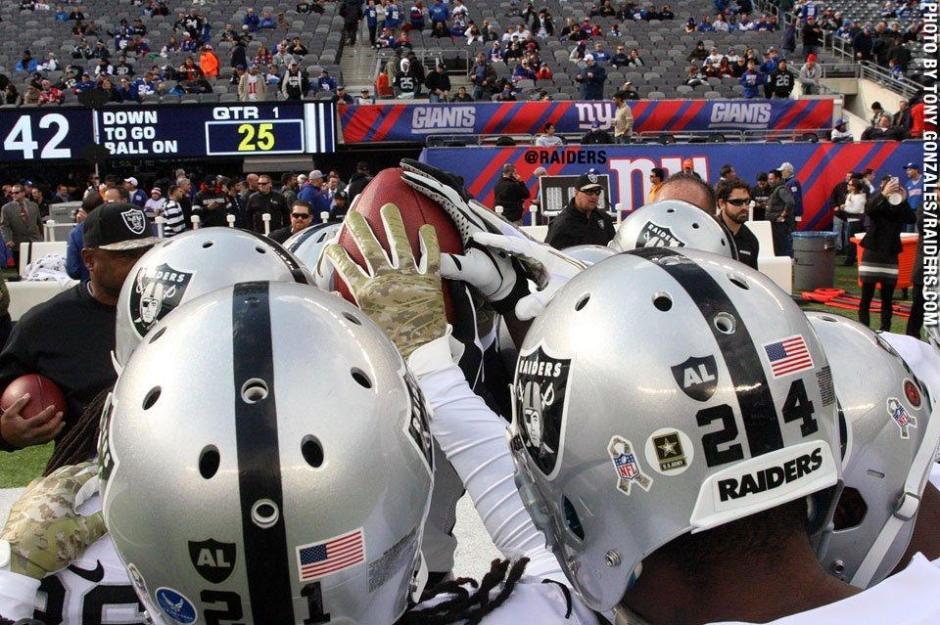 ALAMEDA–The Raiders have not won in the eastern time zone in something like seven or eight games they’ve had a rough go of it. That cross country trip for the west coast teams is always a difficult one and with the Raiders not being very good that makes it even more difficult. This is a game that the Raiders probably should have won.

They had their chances there certainly was no lack of opportunity in this one they could have won on a lack of occasions but you just can’t turn the ball over in these kinds of games. If your going to win on the road you have to protect the football and the Raiders didn’t. Quarterback Terrelle Pryor fumbled the ball he had an interception and Pryor wasn’t able to make a whole lot of plays in the passing game.

If your going to return an interception for a touchdown and make a couple plays on defense your offense has to support you and Pryor in the last couple of games has not done that. Against the Giants he was 11-26 for only 122 yards with no touchdown passes and really on the ground he wasn’t anymore effective he was only five rushes for 19 yards.

So when Pryor had been effective when he’s been running the ball and that’s opened up things for the pass and that’s made the Raiders successful as a whole. The last two games none of that has happened it might be the team that’s catching up to them. They’ve seen enough tape they know some of their tendencies, they know they’re going to protect against the run.

The Giants forced Pryor to run, they feel like if he’s going to pass the ball he’s not going to win he’s just not accurate anymore. It also didn’t help at the Meadowlands which is a tough place to throw the football because the winds are pretty crazy out there. I don’t think that was any help out there, with the Raiders they have to be successful.

On the ground with Pryor and through the air with Pryor they weren’t either of those and Raiders running back Rashad Jennings had a decent enough game with 20 rushes for 88 yards. That’s not a dynamic offense for the Raiders. They’re looking for playmakers they don’t have a lot of them in fact their biggest playmaker is Pryor if he doesn’t make any plays the offense is really in a tough spot.

The turnovers and the lack of play on offense really hurt them and if the Raiders are going to win these games they don’t have a lot of margin for error and they had a lot of errors so they lost this one to the  Giants. 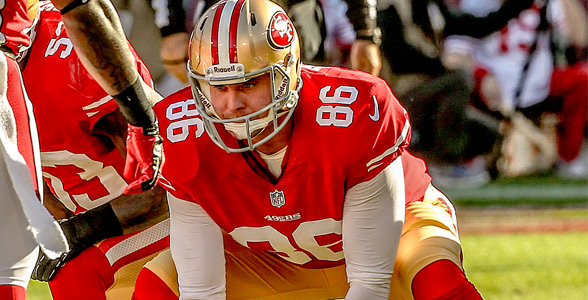 SANTA CLARA–Saturday was cut down day at the 49ers and that signals an end of the preseason and there were not a lot of big surprises. You’re certainly not going to see any huge names on the list but the only name I suppose is semi surprising is safety Brian Jennings, he has been the 49ers long snapper for 13 seasons and he’s tied for the most consecutive games played by any 49er player in their team history.

It’s a shame to lose him he’s been an excellent long snapper for this team he made the Pro Bowl a couple of times, he’s the last player on the 49ers who was drafted by the late former head coach Bill Walsh. That certainly is a distinction to take with Jennings as he moves forward if he continues to play or if he decides to retire. Jennings has been a fantastic player for this 49ers team it’ll be a shame to see him go.

The main reason Jennings was cut was simply a salary consideration. As a 13 year veteran he’s been in the middle part of salaries he’s been getting about $1.5 million a year in that range. The Niners didn’t necessarily mind paying that but for a long snapper that’s quiet a bit of money, especially when he doesn’t play anywhere else. Jennings is like a deep backup on the offensive line. He doesn’t see much action other than long snapping on punting and field goal tries.

He’s not the most versatile player at this stage of his career and when they got a new guy an undrafted free agent who was also a very good long snapper the 49ers decided it would be time to move onto a new player in that position and all the while they appreciated all that Jennings has contributed to this team the salary considerations were something the Niners had to consider for that position. It’s very sad to see Jennings go, he’s certainly good enough that he could sign on somewhere else, the salary issue is going to be a problem no matter where he goes just because he’s played so long.

Austin Collie and Lavelle Hawkins cut: It’s not super surprising Austin Collie was cut he was the wide receiver who for most of his career played for the Indianopolis Colts but suffered several concussions and had a knee injury last year and did not play at all. Collie certainly had some talent. The 49ers decided they had several other wide receivers who are in better condition and in better shape who can contribute right away.

Collie didn’t have much of an impact during the pre season so that’s why he was let go, he could come back if nobody else decides to sign him and the Niners feel the need to add someone but he didn’t really contribute enough to warrant making the team.

A bigger surprise was Lavelle Hawkins he was the former Cal receiver who actually had a very good preseason and had that great touchdown reception in the game on Thursday in San Diego. He had that kick off return for a touchdown two weeks ago he also had several bone headed penalties which weighed against him. Hawkins is someone the Niners could look to if they decide to add another receiver down the road.

Hawkins is good enough to catch on with some other team so, I don’t know if he’s going to sit out there for the 49ers to grab whatever they want. He certainly made an impression and he’s someone the 49ers should consider in the future if they need more help at wide receiver. Those penalties really hurt Hawkins in the end, he was a borderline case while he certainly had the talent, the mental aspect probably knocked him back a couple of notches.