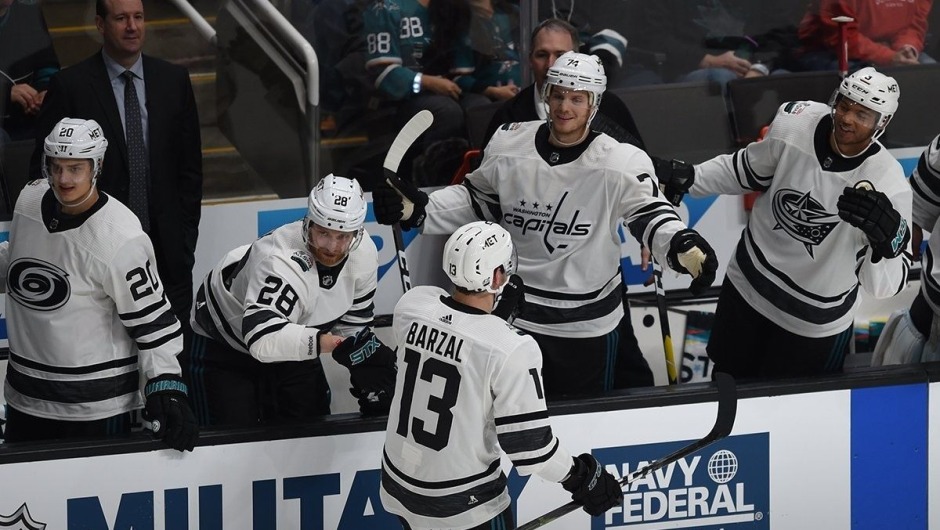 SAN JOSE — In the 2019 NHL All-Star championship game, the Metropolitan Division defeated the Central Division 10-5 in front of a sell-out crowd at SAP Center. The teams started with goaltenders Devan Dubnyk of the Minnesota Wild and Henrik Lundqvist of the New York Rangers. The fan-voted NHL All-Star MVP was Sidney Crosby, which won him a silver Honda SUV.

The Metropolitan Division struck first with a goal 22 seconds in from the Islanders’ Matthew Barzal. Assists went to Kris Letang and Sidney Crosby.

Philadelphia’s Claude Giroux made it 2-0 at 1:53, assisted by Washington’s John Carlson.

It was 3-0 after Pittsburgh’s Kris Letang took a no-look shot at Dubnyk and fooled him. Crosby got an assist on that one.

Columbus’s Seth Jones was awarded a penalty shot at 5:51 after Chicago’s Patrick Kane tripped him on a breakaway. He did not score and it stayed 3-0.

Shortly thereafter, a Metropolitan goal was called back after review, again keeping the score 3-0 Metropolitan.

They finally broke through for the fourth goal when New Jersey’s Kyle Palmieri scored at 8:16. Assists went to Seth Jones and Sebastian Aho.

Their fifth goal came with just over four seconds left in the first half. Crosby scored it, with an assist from Matthew Barzal.

For the second half, Braden Holtby stepped into the Metropolitan net, while Pekka Rinne came in for the Central Division.

The Central Division got their first goal of the game, which was Gabriel Landeskog’s fourth of the night, at 1:15 of the second half. Ryan O’Reilly got the assist.

Colorado added another goal for the Central Division at 3:25 when Mikko Rantanen scored his third of the night. An assist went to Roman Josi and Dallas’s Miro Heiskanen.

The Metropolitan team pushed back with their sixth of the game at 4:02 from Crosby. Barzal got another assist.

The third Central goal came from Ryan O’Reilly at 4:38, but his team gave it back at 5:35 when Carolina’s Sebastian Aho scored against Dubnyk.

The Central got a fourth goal at 8:30 from Mikko Rantanen, and a fifth at 8:50 from Blake Wheeler.

Cam Atkinson got a tenth into an empty net for the Metropolitan, assisted by Seth Jones.

The regular season will resume on Monday, January 28. The Sharks will next play on Saturday, February 2, when they will host the Arizona Coyotes at 7:30 PM PT. 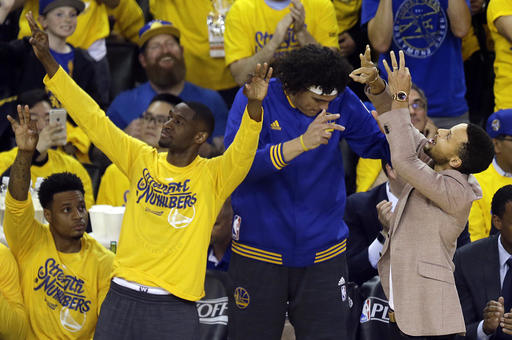 Well, Steph Curry did not play and yet the Warriors showed why they made history for the best record in NBA history. Normally, a team without their star player has a lot to worry about. The Warriors showed no problems minus the reigning MVP and proved why they are the team to beat besides the fact their last year’s champs. Golden State annihilated the Houston Rockets in a 114-81 victory at Oracle Arena.

Let’s be honest, there’s not much to say about this game. The game went exactly as most would have figured given that the Warriors routed Houston in game four and not to mention they’re the Golden State Warriors.

The Warriors played great, the Rockets played atrociously, which is a recipe for disaster. The Warriors played with great togetherness and to nobody’s surprise, they shot out of this world. Golden State made it look easy as they finished with a 54.9 shooting percentage while Houston could not find a way to score with a 32.6 shooting percentage. Golden State played solid defense as they forced 18 turnovers for 25 points.

James Harden was the only Rockets’ player to show any offensive life finishing with 35 points. Besides Harden, Michael Beasley was the only other Houston player to finish the game in double figures.

Klay Thompson did his best to fill Curry’s shoes and finished with 27 points. Thompson knocked down seven buckets from behind the arc on 11 shots and finished 10 of 14 from the field overall. Draymond Green was tremendous overall as usual and totaled 15 points, grabbed nine boards and dropped eight dimes.

Shaun Livingston had a good game on offense as well and scored 16 points on seven of eight shooting. The Warriors looked just as good as they always are and bounced the Rockets out of the playoffs.

Throughout the game, Curry showed incredible excitement from the bench and supported his teammates like no other. And this is why the Warriors are so dangerous, they have some of the greatest team chemistry I have witnessed in my lifetime.

The Warriors won the series and only allowed the Rockets to win one game, which came down to the wire.

Golden State will either face the Los Angeles Clippers who are without Chris Paul and Blake Griffin or the Portland Trailblazers. Portland won game five in their series to go up 3-2 and it appears like they will be Golden State’s semifinal opponent.

Whoever the Warriors play, fans are hopeful that Curry can make his way back into the playoffs. But, with the way Golden State played tonight, let Curry take as much time as he needs to get ready for the Western Conference Finals. I am knocking on wood though, so the whole Bay Area doesn’t freak out on me and say I jinxed them.

Returning to action for the first time since their winning streak came to an abrupt end, the Golden State Warriors resumed their winning ways with a dominating 128-103 victory over the Phoenix Suns at Oracle Arena on Wednesday.

With three days of rest under their belt, the Warriors had to shake off some first quarter rust, shooting under 40 percent from the field while playing in to the Suns’ strategy of making the contest more of a derby race than a basketball game. The result was a first quarter marathon that saw 50 total shots hoisted up between the two teams, with the Suns assuming a two-point advantage over the Warriors at the end of the first.

But the Warriors would not stay down for long, cleaning up their play on both sides of the ball while dictating the flow of the game in the second quarter to take a 13-point lead heading into the locker room. It would be the last time the Suns were even in contention.

The Warriors started the second half with a scorching offensive display, led by Klay Thompson, who scored 27 of his game-high 43 points in the third quarter. Steph Curry backed up his teammate with a mini-clinic of his own, putting through 13 points of his own to further the Warriors lead. The two Splash Brothers combined for 40 of the Warriors 46 third quarter points, effectively shutting the door on the Suns before the final frame even commenced.

Not to be outdone by their backcourt mates, Golden State’s big-men also got the job done for the Warriors in their dominating third quarter outburst. C Andrew Bogut continued to gobble up boards en-route to his 12-rebound night, while Draymond Green produced his fourth triple-double of the season by the sound of the whistle. He would finish the night with 16 points, 10 assists and 11 rebounds.

With no answer for the Warriors dominance on both ends of the court, the Suns were outscored 79-37 during the middle portion of the night’s contest, paving way for what was essentially a victory lap of a fourth quarter.

The Suns would come out shooting, putting up a game-high 38 points in the final quarter, but it would be too little, too late, as the Warriors would put the cap on the beginning of a possible new win-streak.

In a game between the league’s number one -the Warriors- and number three- the Suns- three point shooting teams, it was Golden State who used the deep ball to their advantage, scoring 45 of their points from behind the arc on 15 of 32 shooting. The Suns were uncharacteristically bad from downtown, putting through just 5 of their 22 attempts while trying to play catch up.

With the win, the Warriors were able to keep alive at least one winning streak, as they’ve now won 29 straight games at Oracle Arena. Ominously enough, the Milwaukee Bucks- who were responsible for snapping the Warriors 24 game streak on Saturday- will come to Oracle Arena on Friday to face Golden State for the second time in under a week.

The Golden State Warriors stayed perfect on the season at the conclusion of Friday night’s contest, as an explosive first-half of play saw them easily dispatch the Denver Nuggets in a 119-104 victory at Oracle Arena.

The game seemed all but won for Golden State at the conclusion of the second quarter, when the reigning NBA champions took a 30 point lead into the locker room. But Denver refused to be downed quietly, mounting an admirable second half charge- outscoring Golden State by 15 through the final two frames- before ultimately suffering their fourth loss of the season.

Golden State’s hot start was too much to handle for the Nuggets, who gave up 74 first-half points to the Warriors before heading into the locker room. Leading the pack was none other than Steph Curry himself, who finished the night just shy of a triple-double with 34 points, seven rebounds, 10 assists and three steals. Harrison Barnes followed Curry with 21 points and five rebounds, Klay Thompson had 18 points and six rebounds, and Draymond Green finished just short of his own triple-double with 12 points, nine rebounds and eight assists.

Although Curry stole the offensive show, he wasn’t alone in his endevour, as all of the Warriors’ starters finished in double-digits. The team as a whole shot 49.5 percent on the night while tying their second highest point total on the season. Golden State has now scored 119 points three times through their first six games.

The Warriors put on an unselfish clinic on the night too, as their 28 first-half assists were a new franchise record.

Denver was led by SF Danilo Gallinari, who had an efficient night from the field, shooting 7-of-13 for 25 points. Golden State was able to contain the talented Kenneth Faried, who scored just eight points- the least amongst Denver starters- in 21 minutes on the court.

Golden State is now a perfect 6-0 against Western conference teams, and 2-0 against those in the Pacific division. The team has another divisional matchup on Saturday, as the Curry brothers will meet when Golden State takes on Sacramento at Sleep Train Arena. Tip off starts at 7 p.m.