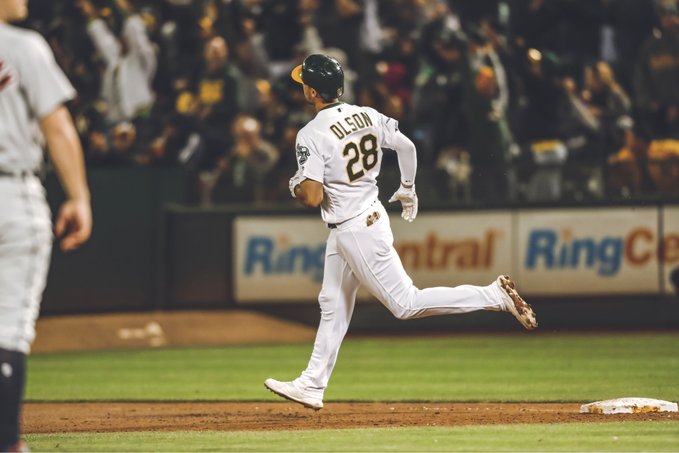 Oakland — The Oakland Athletics (83-59) did exactly what they had to do on Saturday night – beat up on a lesser opponent. The “Rooted in Oakland” crew demolished the lowly Detroit Tigers (42-99) by the score of 10-2. The Tigers have the worst record in all of Major League Baseball and have been eliminated from any possibility of playing in postseason in 2019.

The A’s realistically are destined to play in the AL Wild Card game. They want desperately to be the home team in that game. To be the home team, the A’s need wins and wins should come easier over teams that have losing records. It is truly a “survival of the fittest” environment from now until the end of the regular season.

The A’s have only four games remaining to play against a team with a winning record. They begin a four-game series in Houston on Monday night with the Astros who are tied with the Yankees for the best record in the majors at 93-50. Their other 16 games are with Detroit (1), Texas (6), Kansas City (3), LAA (2) and Seattle (4). The A’s must devour the weak in order to come out on top.

Bassitt struggled in the first two innings of the game on Saturday night. After giving up two hits in the top of first, Bassitt was bailed out by a 6-1-4 double play that is detailed later in this story.

In the top of the second, the A’s starter faced seven Detroit hitters. He gave up two runs off three hits and he hit a batter. The Tigers left two runners on base. Despite having some difficulties, Bassitt struck out three batters and appeared to be starting to find himself.

Bassitt would go on to pitch 6.0-innings giving up just the two runs (both earned) off eight hits. He walked none but did hit one Detroit batter. Bassitt struck out 11 Tigers in 6.0-innings on the mound. That is a career high for Bassitt and the most for an A’s pitcher in a game this season.

After the game, Bob Melvin said, “Bassitt often gets better as he goes along in a game. He also gave our bullpen a break by going six innings.”

The A’s now have sole possession of the second Wild Card slot in the American League. They are one game back of Tampa Bay (85-59) who is in the number one spot and would host the one-game playoff if the season ended today.

The Indians are 1.5-games behind the A’s for the second spot in the Wild Card race at 82-61. Boston is 7.0-games back and has an elimination number of 14. It would take a miracle and a massive collapse by the Rays, A’s or Indians for the Red Sox to become a part of the race.

LHP Sean Manaea (0-0, 0.00 ERA) will take the ball for the A’s and make his second start of the season to close out this three-game series with the Tigers. He had a no-decision in first start of the season last Sunday in New York against the Yankees. The Tigers will counter with LHP Daniel Norris (3-11, 4.76 ERA). He had a no-decision in his last start on Tuesday in Kansas City.

First pitch is scheduled for 1:07 PM at the Oakland Coliseum.

Shouldn’t the infield fly rule have been called?

In the top of the first inning with runners at first and second and one out, the Tigers Christin Stewart hit an infield fly into foul territory on the third-base side. The wind then pushed the ball back into the field of play. Matt Chapman attempted to catch the ball but was unable to do so. Marcus Semien picked the ball up and tossed it to Bassitt who was covering third. The pitcher stepped on the bag and Harold Castro – the runner at second was called out. Bassitt then alertly threw the ball to Profar who stepped on second base and Miguel Cabrera – the runner at first was called out on what scored as a 6-1-4 double play.

As a former amateur umpire, I was immediately looking for one of the four umpires to have his right arm up in the air to indicate that the infield fly rule was in effect. I was shocked when no call such call was being made. So was Tigers manager Ron Gardenhire who immediately came out to discuss the situation with the Homeplate umpire – Dan Bellino.

In this reporter’s opinion (and as a former umpire), the umpiring crew was caught off guard when an apparent foul ball came back into fair territory.

The Athletics jumped on the Cardinals early on Saturday night when they scored two runs in the bottom of the first inning off the Cards starting pitcher Dakota Hudson. The A’s sent eight batters to the plate collecting two hits, two walks, and one hit batsman. It became very apparent that it was going to be a short evening for Hudson.

The A’s scored two more runs in the bottom of the second inning. Oakland sent seven hitters to bat in the inning taking advantage of a double, sacrifice fly, two walks and one passed ball.

The Cardinals closed the gap to 5-2 by the end of 6 1/2 innings, but Chad Pinder hit a two-out three-run home run in the bottom of the seventh inning to make an 8-2 score. The Cardinals’ Lane Thomas hit a pinch-hit home run in the top of the ninth inning which made the final score 8-3 in favor of the A’s.

Oakland is now 63-48 on the season — 8.5 games back of Houston in the AL West and 1/2 game out of the second Wild Card slot behind Tampa Bay. St. Louis falls to 58-51 and into second place in NL Central — 1/2 game behind the Cubs. The Cardinals now are in the number one Wild Card slot in the National League.

A’s fans will get their first look at RHP Tanner Roark on Sunday. Roark came to the A’s at the trade deadline from the Cincinnati Reds for minor league outfielder Jameson Hannah. Roark was 6-7 with a 4.24 ERA in 21 starts for the Reds.

The Cardinals will counter with RHP Adam Wainwright, who is 7-7 with a 4.47 ERA so far in 2019. Wainwright started against Oakland back on June 26 in St. Louis. He lost that game 2-0. Wainwright worked 6.2 innings giving up two runs (both earned) off seven hits. He walked one, struck out nine, but he gave up two home runs. Wainwright will be a free agent at the end of the season.