San Jose went into Atlanta Saturday, went down a man, Coach Matías Almeyda was ejected again and Captain Chris Wondolowski received a red card from the bench as another Bay Area team entered a “sea of red” and emerged with a loss.

The Quakes remain winless versus Atlanta United as their road game losing streak stretched to six as they faced the second place team in the Eastern Conference this time.

San Jose’s Cristian Espinoza’s run which tied the game was sandwiched in between two yellow cards to him as well, putting the Quakes down a man in the 34th minute.

With just a game in between free, Almeyda was forced to leave the game again late in the match.

Wondolowski received his penalty from the bench in 91st minute in between Atlanta goals for a foul and abusive language.

An added note to Espinoza’s run, it ended up being an own goal by keeper Brad Guzan, that came after fellow keeper Daniel Vega sent a rainbow from his side to Espinoza.

A different Bay Area team that was also involved with an own goal recently, happened in the hockey world versus red-clad fans in the stands too. The last goal of the San Jose Sharks game Wednesday was an own goal by the Sharks, which was credited to the Calgary Flames’ Johnny Gaudreau.

Returning back to soccer, the game started with the Quakes going down early after Justin Meram scored in the fourth minute. The ball was helped by a deflection off defender Florian Jungwirth on the way into the net.

The second yellow and subsequent red came after a tussle with Franco Escobar.

Atlanta’s Emerson Hyndman had an opportune chance in the 46th minute, especially with a defensive breakdown, but missed to the left.

Besides the obvious uphill battle, ended up being outshot 4-0 in the first half after four minutes of stoppage time. Atlanta had the slight possession edge 51.3% to 48.7%

It was quiet and even in the second half at first with Gonzalo Martínez having one attempt saved, the other missed, teammate Brandon Vázquez’s attempt saved and San Jose substitute Danny Hoesen’s attempt saved.

Then Atlanta took a hit in the second half when Josef Martínez (who did not have a shot in the game) was found on the sidelines twice and eventually pulled off on a stretcher because of presumably his knee. His MLS goal-scoring streak had been active since May 24 for 15 games. Martínez’s substitute Mohammed Adams took his place in the 79th minute.

Martínez’s teammates then amped up their play. Leandro González, Vázquez and Julian Gressel had misses in the 79th through 81st minutes before Vega stepped up with saves versus Hyndman, Darlington Nagbe and Miles Robinson in the 82nd, 84th and 85th minutes.

It would be too much though as the Quakes’ chances dissolved when Hyndman scored a redemption goal in the 90th minute, Wondolowski got his red card for perhaps the first time in his 300th MLS start and Martínez made it 3-2 in the 92nd minute.

San Jose substitute Andrés Ríos made two more attempts, which were saved and blocked as did Gressel and Adams (both saved) before the final whistle was blown.

Atlanta finished with 18 shots (Hyndman and Martínez four shots apiece) to the Quakes’ three and with 60.7% possession.

Up Next: Despite key pieces missing now, San Jose will look to right the ship when they host the Philadelphia Union Wednesday at 8 pm for the first of a two-game homestand.

photo from newsday.com: Alexandru Mitrita #28 of New York City FC celebrates after scoring the second goal during the first half of their game against San Jose at Yankee Stadium on September 14, 2019.

The San Jose Earthquakes remained winless versus New York City FC as they suffered their third straight 2-1 loss against them Saturday at Yankee Stadium.

It was the top of the Eastern Conference’s seventh straight contest without a loss and they have held their opponents to one goal or less in that stretch.

Quakes coach Matías Almeyda was back on the sidelines with this team, but they continued on a five-game losing streak away from home.

San Jose striker Chris Wondolowski broke the 0-0 tie as he struck with hits 158th goal in the 20th minute. It was his third shot out of five for the Quakes so far compared to one shot for NYCFC not on target up to that point. Magnus Eriksson received the ball on the touchline, passed to Vako and with narrow room and precision timing, Vako found Wondolowski in the goal box as Wondo extended his staggered stance past defender Alexander Callens

Off a corner, NYCFC’s Gary Mackay-Steven hit the crossbar in the 26th minute after his ball hit the Quakes’ Guram Kashia.

New York City FC started building up their shots, none dangerous enough though until suddenly San Jose found themselves down in the 43rd minute

Keeper Daniel Vega saved a shot in the 39th minute and then another off his line in the 40th minute after Keaton Parks passed to Mackay-Steven. However, Vega caused a rebound which Tommy Thompson got a foot on before Parks blew the ball past Vega and Marcos López, who was helping in net. That deposit was Parks’ first in the MLS.

Three minutes later, with two defenders surrounding him and Vega off his line again, Alexandru Mitrita took the well-directed pass from Ismael Tajouri-Shradi and made the 2-1 tally, as he slid on the grass like a turtle with a fist pump in celebration. It was Mitrita’s second goal in as many games and third in four games.

NYCFC finished the first half with eight shots, five on target and the Quakes with only one more shot then when they scored their goal.

San Jose was not shy about going for the equalizer to start off the second half.

Those included attempts in the 46th & 47th minutes (both saved by keeper Sean Johnson), 51st minute (did not have Wondo at the right spot to finish), 58th minute and two by Wondolowski in the 59th and 60th minutes.

Wondo was also involved in some off-the-ball action as he raised his right elbow against Callens, but avoided serious trouble.

In the 65th minute, the Quakes’ Judson saved a goal after the ball hit Vega and went past him.

San Jose defender Florian Jungwirth tripped Mitrita at the top of the box in the 81st minute, but his kick went high.

There were eight minutes of stoppage time, but the Quakes were unable to level up the game.

Up Next: Vako added three shots in the second half along with Wondo, who ended up with a game-high six. San Jose will look to pull out a win on this road trip when they conclude it Saturday at 12:30 pm versus Atlanta United FC. 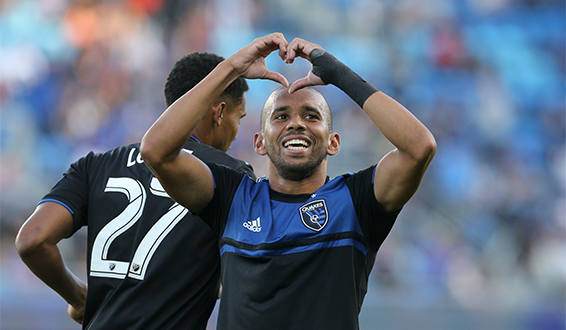 photo from sjearthquakes.com: The San Jose Earthquakes get some love finally getting into the win column after five games with a 3-1 win over the Vancouver Whitecaps at Avaya Stadium on Saturday night.

SAN JOSE, Calif. — In a historic night that featured first goals for three different players, the San Jose Earthqaukes used two of them to their advantage as they cruised to a 3-1 victory over the Vancouver Whitecaps on Saturday evening at Avaya Stadium.

It was also the first match without head coach Matias Almeyda who was suspended for the match due to his ejection for arguing a non-call in the match this past Wednesday in the 4-0 loss to LAFC.

The win snaps their three-game losing streak and four-game overall winless streak. The victory also propelled them into fourth place in the Western Conference as they are tied with the Los Angeles Galaxy with 41 points. Vancouver is 2-2 in their last four games and sit in the cellar with 27 points.

“It was a big example of character”, said defenseman Shea Salinas on how the team responded without Almeyda being out there on the sidelines. “We have a bunch of leaders on this team. Every single guy that steps out there make sacrifices for the team and it showed tonight. It was an amazing performance.”

Vancouver (6-13-9) drew first blood for the Whitecaps in the seventh minute when Jakob Nerwinski received a ball along the right sideline from Theo Blair. Nerwinski dribbled past Vako and bent in a left footed shot into the lower left corner for his first goal of the season in an entertaining opening 10 minutes.

San Jose (12-10-5) countered immediately on the next possession. Captain Chris Wondolowski received a nice ball inside the box from 10 yards out from Christian Espinoza. He one-timed a pass over to Judson who fired a shot into the lower left corner of the goal that beat Whitecaps goalie Maxime Crepeau for his first goal of the season in the eighth minute.

“We knew we had to hit the reset button”, said Wondolowski. “No need to panic but at the same time iron out the details. It was good to get the three points.”

The Quakes dominated the first half from there on out and never looked back as they peppered Crepeau with shots all the way up to the halftime whistle blew. Crepeau amazingly kept the Whitecaps in the game stopping eight of the nine first half shots, including a right footed shot from Vako that was destined for the far corner of the goal only to have Crepeau get a hand on it at the last second, poured on by the home team.

In the 29th minute, Ali Adnan apparently tripped up Mangus Eriksson inside the box but referree Ramy Touchan allowed play to go and no penalty was called.

San Jose gained the lead in the 34th minute off a set piece. A corner kick by Eriksson serviced into the middle where Florian Jungworth’s header attempt deflected over to an open Wondolowski who one-timed a header into the back of the night for his team leading 11th goal of the season.

To say the Quakes controlled possession in the opening 45 minutes would be an understatement as they had a 80%-20% advantage.

In the second half, San Jose continued its exhibition against Vancouver creating numerous chances agianst the porous Whitecap defenese in the first 25 minutes of the half. However they weren’t able to cash in on any of them whether it not being able to finish their attempts or because of Crepeau’s wall of stone.

“To be honest I think we match up well with them (Vancouver)”, said Wondo. “Our style (of play) kind of helps us dictate the game against them.”

San Jose’s hard work paid off for them in the 73rd minute when Eriksson dribbled inside the box, then found a wide open Andres Rios, who came in as a substitute in the 70th minute for Vako, just outside from 20 yards out and his one-timer fired off the left goal post and into the back of the night for his first career MLS goal.

“I’m really happy”, said Rios. “It was my first goal at home. It’s an important victory for the team in our fight to get to the playoffs.”

Daniel Vega finished with two saves in a light night for the Quakes goal keeper. Crepeau, who was arguably the Whitecaps best player of the match, finished the evening with 14 saves on 16 shots on goal.

“43 shots on goal, you’d expect a few more goals,” Salinas joked about his team setting the league record. “He’s (Crepeau) been making saves like that all year. He’s a great goal keeper.”

GAME NOTES: San Jose had an astounding 16 corner kicks to only 1 for Vancouver. San Jose led in fouls 10-9.

San Jose is now 4-1-6 all time against Vancouver.

Carlos Fierro and Shea Salinas came in as subsitutions for Wondo and Espinoza in the 80th minute.

UP NEXT: The Quakes host Orlando City FC next Saturday, August 31 at 7:15 pm at Avaya Stadium.