SANTA CLARA, Calif. — That noise which always connects itself to a really big football game begins as whispers then morphs into a crescendo of chirpiness as the kickoff approaches.

That noise finally managed to irritate the insular Oregon Ducks.

Not only did their opponent have everything to play for–a BCS berth, a Pac-12 Championship, the unofficial title of Salt Lake’s most formidable team of the new millennium–and the Ducks little if anything, the word was the Utah Utes were the more physical team, with the inference that the Ducks were… soft.

“Quite frankly, I think maybe these guys all week long got a little bit tired of hearing we weren’t the more physical team,” Oregon coach Mario Cristobal said. “It gives you a little bit of an edge.”

That edge grew into a force for Oregon in the first quarter of the Pac-12 Championship Game on Friday. In succession, the Ducks stuffed the Utes on 4th-and-1 at the Oregon 33, forced a three-and-out, blocked a punt, then on Utah’s fourth possession, picked off quarterback Tyler Huntley, who had only thrown two interceptions all season.

Although the Ducks led just 10-0 after the first quarter, the tone had been set. Oregon was settling in, Utah was on its heels–maybe for the first time in 2019.

“We didn’t win the line of scrimmage for the first time all season, which is, like I say, disappointing. Surprising, really,” coach Kyle Whittingham admitted.

The Ducks would increase their lead to 20-0 at the half, then see the Utes surge briefly to trail just 23-15 near the end of the third, only to see the Ducks recharge in the fourth, and sprint to a 37-15 win that sends them to Pasadena for the Rose Bowl as conference champs.

Utah, riding the momentum of being the nation’s most dominate defense team statistically, needed a win Friday to put themselves in prime position for a date with No. 1 LSU in the national semifinals. Instead, the Pac-12 South champs, with 10 players likely headed to the NFL, will settle for yet to be officially determined date in the Alamo Bowl in San Antonio.

The result was shocking, the numbers even more so.

Utah allowed more than 17 points in a win only once all season, that in their close call at Washington where they prevailed 33-28. In their only loss to USC, they allowed the Trojans 30 points. Other than two, previously-mentioned results, they pitched two shutouts, smashed Oregon State 52-7, pounced on UCLA, 49-3, and stuffed Arizona and Arizona State by a combined score of 56-10.

Huntley put himself into the periphery of the Heisman discussion by throwing 16 touchdowns and only two interceptions. In part, Utah’s defense dominated because their offense never relinquished the ball. Only twice did the Utes fail to win the time of possession–both times by less than a minute in games against UCLA and Northern Illinois they won easily. Utah’s last three wins came by a combined 104 points.

But on Friday, Huntley threw two interceptions while being sacked six times, the time of possession was virtually even, and Utah never snapped the ball inside the Oregon 20-yard line. Yes, no red zone opportunities.

Five, first half Utah possessions reached Oregon’s 40-yard line, but none went past the 30.

Did the bright lights of the moment dull the Utes? Did they get caught looking ahead to Joe Burrow and LSU? Whittingham said no.

Oregon saw their own national aspirations dashed two weeks earlier in a sluggish loss at Arizona State. Then they looked better, but not much better, in beating Oregon State to conclude the regular season.

Few saw their superior effort on Friday coming. Not even some their own fans in attendance. But on the game’s first possession, the Ducks marched down the field in nine plays, culminating with C.J. Verdell’s 3-yard run for a touchdown. Verdell was just getting started, with Utah as close as they would get, down 23-15, Verdell broke through the line of scrimmage and raced for a 70-yard TD run.  As the culmination of Verdell’s night in which he would rush for 208 yards and be named the game’s MVP, he would score a third time to put the game on ice, from 31 yards out with 2:33 remaining.

“It was a little bit of everything. It starts with the players, their commitment to establishing the run,” Cristobal said. “Their film study, the way they practiced this week. The way that the line blocked. The way that (quarterback Justin Herbert) carried out his fakes and ran with the ball as well.”

Utah held 11 of their 12 opponents under 100 yards rushing, only to surrender 239 to Verdell, Herbert and the Ducks.

The Utes loss bring clarity to the BCS picture in that only two scenarios seem plausible heading into the season’s final Saturday. If Georgia can knock off LSU, they’ll be the fourth entrant. If Georgia fails, whoever wins the Big 12, Oklahoma or Baylor, will be in.

For Clemson and Ohio State, a win in their conference championships will land them a date against each other as the brackets No. 2 and 3 seeds. Undefeated LSU will probably qualify, win or lose.

SANTA CLARA – 24 hours ago, the future of the Oregon football program was in limbo. With Mark Richt’s surprising retirement from Miami on Sunday, rumors swirled around Mario Cristobal returning to coach at his alma mater.

Would he spurn the Ducks, hours before they were to play in the Redbox Bowl — and, more importantly, leave a program after bringing in the nation’s sixth-ranked recruiting class in 2019?

The answer was clear to Cristobal. On the bus on the way to practice on Sunday, he heard the chatters.

“It got a little bit noisy,” he said. “Felt it was good to address it before it became noisy.”

So he called a team meeting, and told his players in no uncertain terms: “This is where I want to be. There was no waffling. It was put to bed quickly.”

Coupled with a 7-6 win over Michigan State on Monday at Levi’s Stadium, the 24-hour period went from potentially catastrophic to one worth celebrating. Tack on quarterback Justin Herbert’s announcement last week that he would return for his senior season, and 2018 could not have ended on a higher note for Oregon.

“Games like that typically have not gone in our way over the last few years,” Cristobal said. “This culture has changed the program. I feel like we’re just getting started.”

The game itself was nothing to write home about.

For three quarters, Herbert and the high-powered Oregon offense was stymied: 11 drives, 10 punts.

But for one drive early in the fourth, it came together. There were two first-down passes to Jaylon Redd. Then, two strikes to Herbert’s favorite target, Dillon Mitchell — the latter a 28-yard perfect throw in the back of the end zone.

That drive wiped out a frustrating offensive performance for the Ducks. They managed just 203 yards of total offense. Their run game was stifled by the Spartans’ No. 1 rushing defense, which held Oregon to 37 yards on 27 carries. They did not cross midfield until the fourth quarter. They held the ball for nearly 15 fewer minutes than Michigan State.

Herbert, too, was rattled by the Spartans’ defense. He completed 19-of-33 passes for 166 yards, his second-lowest total of the season. But the projected top selection in the 2019 NFL Draft before his decision found a way on that one key drive.

“Things haven’t always gone our way this year, but we battled through together,” Herbert said. “We won our championship today.”

Oregon, which finishes its season with a 9-4 record, is a program on the rise. According to Cristobal, it starts with the culture change on the team.

“I can’t speak enough about these guys and what they represent as competitors,” Cristobal said. “I’m not an old man but I’m not a young man. You’re not going to find guys like this. It’s great to see them achieve that next-level success and continue elevating the program.”

Cristobal continued: “If they showed up on the bus by themselves without a coaching staff, they could get the job done.”

On the field, in a nationally-televised interview, Cristobal affirmed his commitment to Oregon.

Cristobal is back. Herbert is back. The incoming recruiting class is tops in the Pac-12. 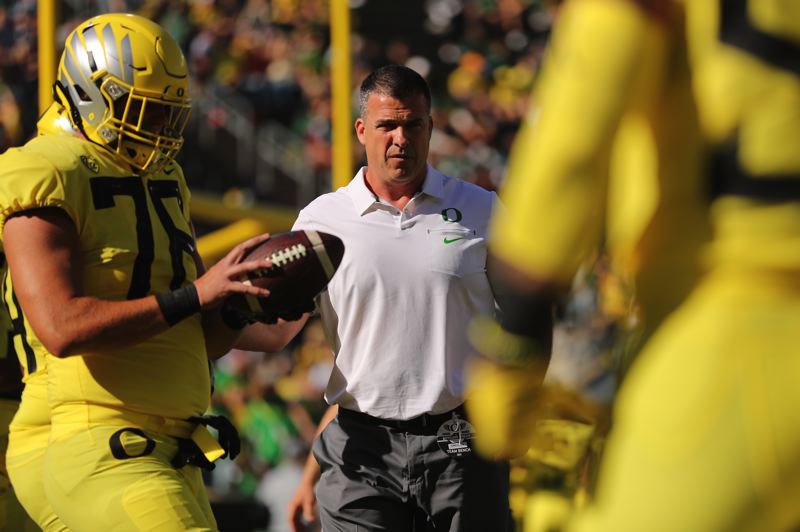 SAN FRANCISCO — All college football bowl participants want to put their best foot forward, making a statement that caps a successful, winning season and serves as a springboard into the next.

The Oregon Ducks might be best positioned to capitalize on that formula.

With the announcement that prolific passing quarterback Justin Herbert will return for his senior year, along with the highest rated recruiting class in the history of the program, the Ducks are positioned to be the Pac-12 favorite and a national title contender in 2019.

For Oregon, the road to the top of the 2019 college football mountain starts Monday in Santa Clara where the Ducks face Michigan State in the Redbox Bowl.

Herbert, who passed for 2,985 yards and 28 touchdowns, was poised to be a top five pick in this spring’s NFL Draft. Instead he’s staying in Eugene in the hopes he can lead the Ducks to rarified air.

“We couldn’t be more excited for Justin to return for his senior season,” Coach Mario Cristobal said. “He is a special talent on the field, but, more importantly, a special person and leader off the field.”

“I have come to realize, is that nothing could pull me away from the opportunities that we have in front of us,” Herbert said. “As we prepare for our bowl game, I would like to ensure that there are no distractions outside of this game. My commitment to my teammates, our coaches, Duck fans, and the University of Oregon has never been stronger.”

To say Herbert’s decision to remain in school bucks current convention would be an understatement.  The 6’6″, 233-pound junior is rated as the No. 1 quarterback on ESPN’s draft board and a surefire top five pick in several other mock draft scenarios. That type of positioning along with the fact that Oregon is coming off an 8-4 season following a 7-6 campaign in 2017 under previous coach Willie Taggart, who bolted from Eugene after one year to coach Florida State, would suggest Herbert to be the next guy to leave town, in his case for millions of dollars courtesy of the NFL.

But that decision would discount the influence of first-year coach Cristobal on Herbert, his classmates, several of whom have also decided to return, and the highly-rated recruiting class. Simply put, something’s brewing with the Ducks, and it’s not just the opportunity to make a third trip to the BCS National Championship game like they did in 2011 and 2015.

It’s the opportunity to potentially win it this time.

Herbert’s return along with that of offensive  linemen Shane Lemieux, Calvin Throckmorton and Jake Hansen–all highly regarded prospects with a remaining year of eligibility–means the Ducks could return all 11 starters on offense, pending the decision of wide receiver Dillon Mitchell. Rarely does the unsettled landscape of college football yield 11 returning starters, but Lemieux made it clear that Cristobal has his entire roster thinking and dreaming.

“We talked this year about laying the foundation where we want our program to go,” Lemieux said. “I want to come back in ten years or so when we’re winning national championships every year and we turn into this dynasty like Alabama or these other schools, and really say, ‘We started that.’ A lot of these seniors right here are going to look back at the foundation that we started.”