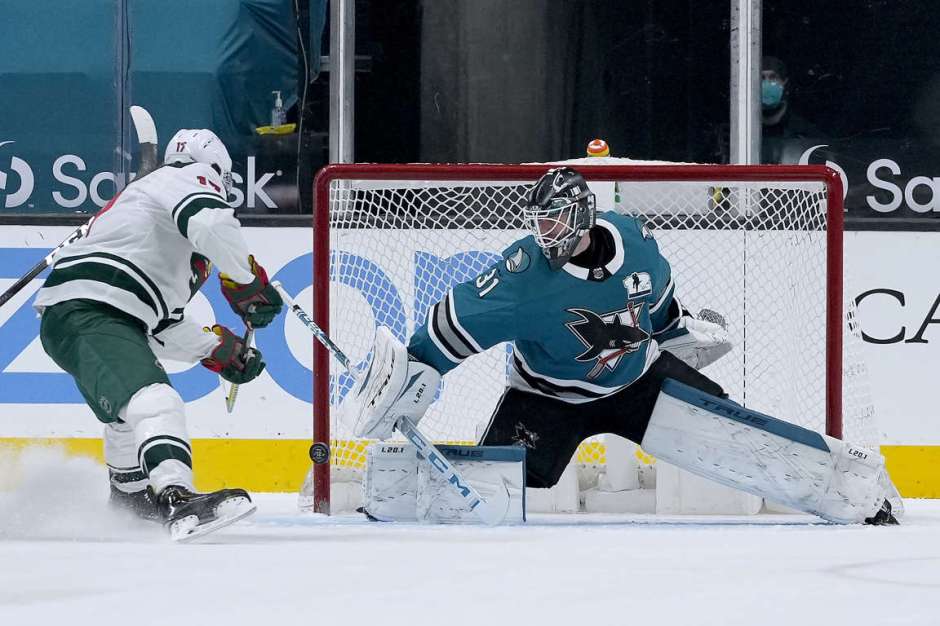 The San Jose Sharks celebrated Patrick Marleau’s new record in NHL games played Saturday. It was the team’s first game at home since Marleau played his 1768th NHL game, surpassing Gordie Howe’s record, in Las Vegas last Monday. Family members were able to attend the game for the occasion. The Sharks all wore Marleau Jerseys for warm-ups. A pantheon of Sharks and NHL players and alumni spoke in a video presentation before the game. The only thing missing was an arena full of fans.

The Minnesota Wild won the game 6-3. Ryan Suter, Marcus Foligno, Jared Spurgeon, Kevin Fiala, Kirill Kaprizov and Nick Bonino all scored for the Wild. Kaapo Kahkonen made 27 saves for the win. Logan Couture, Evander Kane and Joachim Blichfeld scored for San Jose. It was Blichfeld’s first NHL goal. Josef Korenar made 15 saves during the second two periods, while Martin Jones made five in the first period. The win clinched a spot in the playoffs for the Wild. The loss was San Jose’s eighth in a row.

After the game, Sharks Head Coach Bob Boughner said: “The start was a disaster, right from the first shift, the first goal.” Boughner pointed out that there were several “new guys” in the lineup and this may have accounted for missed coverage and other errors during the game. He went on to say: “It’s no secret, you know, look at their lineup, look at our lineup, and, you know, we’re missing a little depth there. And you know, it got us early, let’s be honest, you know, second and third goal, that’s where it got us.”

As Boughner mentioned, the game did not start well for San Jose. Just 19 seconds in, Ryan Suter scored his second goal of the year, on the first shot of the game. Suter skated in with the puck and took a shot from the face-off circle. It whizzed by Martin Jones’s shoulder. An assist went to Jordan Greenway.

Moments later, Timo Meier collided with Kirill Kaprizov, Meier went to the bench but returned to play without missing much time.

Marcus Foligno added another 12 minutes into the first. Joel Eriksson-Ek carried the puck in in a two-on-one with Foligno. Eriksson-Ek made a pass at the last moment for Foligno the take the shot.

Jared Spurgeon made it 3-0 at 17:43 of the first. Spurgeon got by the Sharks defense and took a shot into the far corner. Ryan Hartman and Mats Zuccarello got the assists.

That first period saw the Wild out-shoot the Sharks 8-4. There was just one penalty called, a too many men on the ice call against San Jose. The Sharks penalty kill gave up no shots.

Josef Korenar was in the Sharks net to start the second period.

The score did not change again until the final minute of the middle frame. Marcus Johansson took a shot from the boards and created a rebound. Kevin Fiala was at the net to knock the bouncing puck in. Assists went to Johansson and Jared Spurgeon.

There were no penalties in the second period, and the Sharks led in shots 13-7.

Logan Couture got the Sharks on the board 1:19 into the third period. Couture passed the puck to Timo Meier as the skated to the net. Just as his pass got away, Couture was knocked down. As he slid, face-first, to the net, Meier’s rebound landed in front of him. He swept it into the net. Assists went to Meier and Rudolfs Balcers.

Kirill Kaprizov scored a power play goal to make it 5-1 at 4:28. Fiala swept the puck off the boards to the slot, where Kaprizov was ready for the shot. Assists went to Fiala and Nick Bonino.

Evander Kane scored for the Sharks at 4:47, when Nikolai Knyzhov took a shot from the blue line. Tomas Hertl knocked it out of the air and Kane cleaned it up for his 18th of the season.

Joachim Blichfeld scored his first NHL goal at 6:06. He took the shot from below the face-off dot. The puck went over Kahkonen’s glove and into the top corner.

Nick Bonino scored into an empty net at 19:38. An assist went to Ian Cole.

The Sharks took two penalties in the third period. The Wild’s power play got one shot on net during the period.

The Sharks next play on Monday against the Arizona Coyotes in San Jose at 7:30 PM PT.