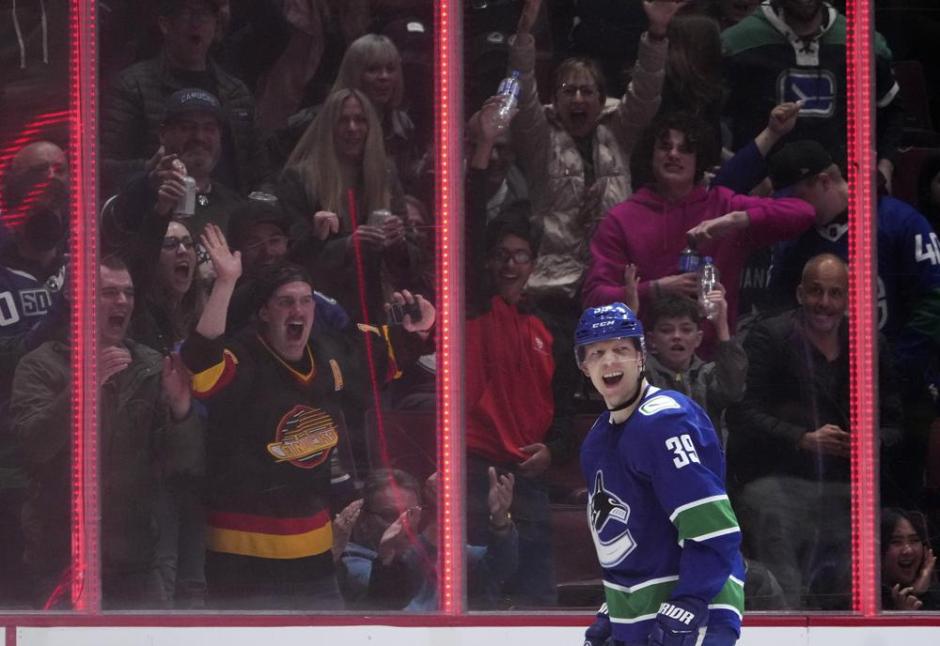 Vancouver Canucks’ Alex Chiasson and fans celebrate his goal during third period action at Rogers Place in Vancouver on Sat Apr 9, 2022 (The Canadian Press via AP)

Vancouver Canucks’ Alex Chiasson and fans celebrate after Chiasson scores in the third period against the San Jose Sharks at Rogers Place in Vancouver on Sat Apr 10, 2022 (The Canadian Press via AP)

VANCOUVER- The San Jose Sharks dropped their sixth in a row, a 4-2 road loss to the Vancouver Canucks on Saturday. The loss concluded the season series between the teams, with the Canucks winning all three games. The win put the Canucks within four points of a playoff spot. Jason Dicksinson, Conor Garland, Alex Chiasson and Luke Schenn scored for the Canucks. Thatcher Demko made 35 saves for the win. Tomas Hertl and Nick Bonino scored for the Sharks and Kaapo Kahkonen made 35 saves in the loss.

Like many of the Sharks recent losses, the game was close in many respects. Sharks Head Coach Bob Boughner listed some of the missed opportunities that the Sharks had on Saturday:

“Had our scoring chances, again, I mean, I sound like a broken record but we had breakaways, we had three posts, you know, we had looks at the end in our six on five, six on four situation. You know, we had plenty of opportunities to score, we didn’t get it done.”

Sharks defenseman Ryan Merkley took a hit early in the first period after missing the mark with a drop pass in the Canucks zone. While he was getting to the bench, the Canucks went the other way and scored. He left the game until late in the period. Boughner discussed the hit and the play:

“I thought [the hit] looked a little high. Concerned about that, also concerned about the play. In the back of our net, that’s how we start the game. Things that we’re trying to get out of his game, out of our game. He’s a young guy. But I think that he got hit high, I looked at it a few times. He went through protocol, got checked out, it was good to see him come back healthy and ready to help us. But those are learning plays.”

Jason Dickinson gave the Canucks the lead just 2:05 into the first period. He intercepted a pass in the Sharks zone and went the other way two-on-one. He tucked the puck into the net at the last minute after Kahkonen had come too far out of the net.

Tomas Hertl tied it at 7:33 with a power play goal. Erik Karlsson set up Timo Meier for a shot from the circle. Demko stopped Meier’s shot but the rebound went right to Hertl on the other side. Assists went to Meier and Karlsson.

Conor Garland made it 2-1 at 4:49 of the second period. Garland picked up the puck at the Sharks blue line and went the other way with speed. He took the shot from the circle and to score his 15th of the season. Alex Chiasson got the assist.

Nick Bonino, playing his 750th NHL game, deflected a Brent Burns shot from the point to tie it at 18:37. Assists went to Burns and Noah Gregor.

Alex Chiasson made it 3-2 at 2:07 of the third period. He caught the puck low in the circle and put the shot through the short side. Assists went to Bo Horvat and Tyler Myers.

Luke Schenn scored a short-handed goal into and empty net with a second left in the game to make it 4-2.

The Sharks killed seven penalties in the game, allowing 12 shots to the Canucks power play. The Sharks power play had five opportunities and got one goal and five shots. In the face-off circle, the Sharks won 55% of the draws.

The Sharks next play on Tuesday in Nashville against the Predators at 5:00 PM PT. 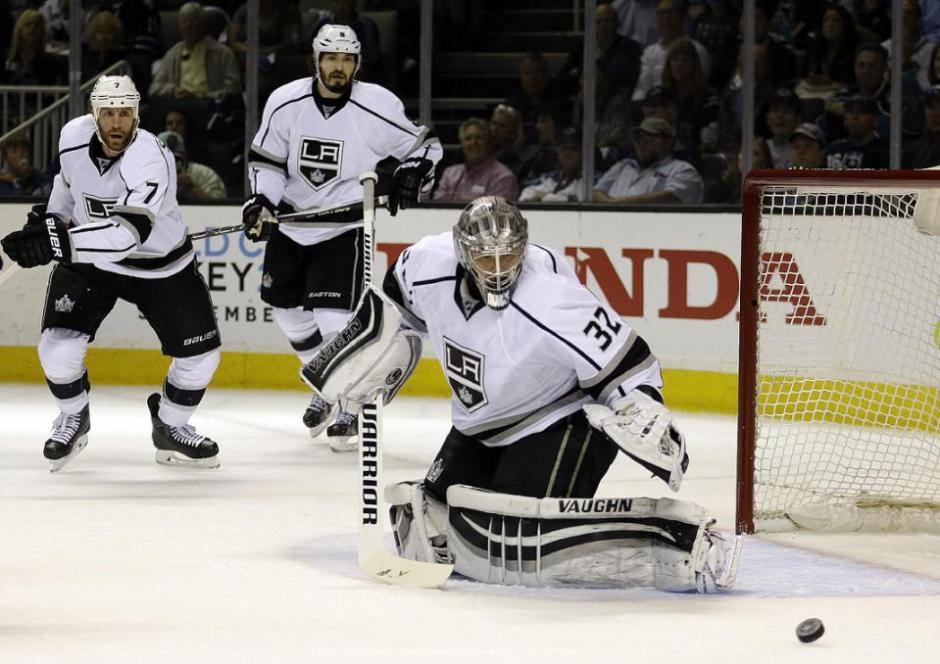 SAN JOSE– The San Jose Sharks defeated the Los Angeles Kings at SAP Center on Wednesday, by a score of 3-2. The win gives San Jose a 3-1 series lead, sometimes called a stranglehold. Despite rumors that there would be changes to the Sharks lineup for Game 4, there were none. Sharks head coach Peter DeBoer did not even alter his line combinations. The lack of change paid off. The team as a whole was sharper and more balanced than it had been on Monday. Even when they gave up two goals early in the third period, they corrected quickly enough to hold on for the win. It was altogether an impressive performance.

The fourth line that struggled in Game 3 pulled themselves together and played very effective minutes. After Wednesday’s game, coach DeBoer talked about the line of Chris Tierney, Tommy Wingels and Nick Spaling:

They were excellent. Again, I think with our group, every time this year that we’ve challenged them to be better, they responded and I think that speaks to the character in the room. And those guys I thought were excellent tonight for us. I didn’t hesitate to put them out with four or five minutes left in the game.

All three Sharks goals were power play goals, scored over four power plays. This was a vast improvement over their 0-5 power play performance Monday. The game winner was scored by Patrick Marleau, with additional goals scored by Brent Burns and Joe Pavelski. Martin Jones made 26 saves for the Sharks. Jonathan Quick also made 26 saves, for the Kings. Los Angeles goals were scored by Trevor Lewis and Luke Schenn.

The Sharks spent most of the first five minutes in the Kings zone, but could not find any good shots. Near the five-minute mark, the Kings went the other way, frst two on one, then when Justin Braun caught up to them, three on two. That led to a prolonged attack in the Sharks’ zone. Martin Jones stopped the three shots that came his way, but when the Sharks finally got the puck out it was by icing it. The Sharks were on their heels for several minutes even after that. Their forays into the Kings’ zone were short and not productive. Slowly, the Sharks started pushing back. They were spending less time trapped in their own zone when the 10 minute mark ticked by. But the shots were still 7-2 Los Angeles.

By the time the period ended, the Sharks had corrected that disparity. They saw a good number of excellent chances pass them by, since no one was in the right spot to take advantage of unexpected, glaring opportunities. The shots were 11-8 San Jose, and 9-2 San Jose for the second half of the period. The teams were even in faceoff wins.

Jeff Carter started the second off with a roughing penalty 30 seconds in, against Marc-Edouard Vlasic. The Sharks maintained the attack for a solid 40 seconds and then a crazy bounce sent the puck off the back boards and through the crease, then off a skater and back through the crease, still not going in. This disrupted the play enough for the Kings to clear the zone.

The Sharks retrieved the puck behind their own goal line and resumed the attack. This time the Sharks did not take long. A cross-ice pass from Joel Ward to Brent Burns found him above the left faceoff circle. Quick could not get across in time and Burns’ trademark shot blew by him to give the Sharks the lead. Assist went to Ward and Vlasic.

Before the cheers died down, play had resumed and Jonathan Quick was handling the puck behind his net. Matt Nieto, chasing the puck down, caught Quick in the back of his skates. Both players went down and Nieto went to the box. The Sharks penalty killers started out well and had a short-handed chance half way through the penalty, with Chris Tierney almost skating in front of Quick for a shot before being held up by Kings defenders.

In the final seconds of the penalty kill, Karlsson, Vlasic and Thornton carried play back into the offensive zone and set the Kings spinning for a shift.

Unfortunately, that penalty kill was followed by another less than a minute later. Joel Ward was called for high sticking. The Kings had a good chance about half way through but an overhead clear by Vlasic allowed the Sharks to regroup and change.
The Sharks finished that up with another short handed chanced, and not long after it expired, yet another outrageously improbable missed chance. A Kings skater got tangled up with his goalie and a Shark and all were out of play for several seconds, with the puck sitting in the blue paint. No Sharks skater could get to it, including the one trapped in the body tangle inches away.

The Sharks drew another power play when Tomas Hertl was tripped next to the Kings net by Rob Scuderi. 39 seconds into the power play, Patrick Marleau sent the puck behind the net to Thornton, who sent it out front for Joe Pavelski. A fast shot as he fell to his knees earned Pavelski his fourth goal of the playoffs.

The game tempo increased after that. The Sharks drove play for a long spell after that. When they did not have th epuck, they wasted little time stripping the Kings of it, or knocking them off of it. Brenden Dillon made Dustin Brown pay for sendng the puck around the boards, and Patrick Marleau added a solid hit or two.

The Kings finally did get some traction in the last three minutes of play, but it did not last for more than a minute. The Sharks were back in the Kings’ zone at 7:30 when Luke Schenn was caught roughing Joe Thornton. The Sharks did not convert on their third power play but the Kings did not take any leisurely skates into the Sharks’ zone either.

The shots for the period were 13-8 San Jose.

The teams picked up where they left off for the third. 1:34 into the period, Jamie McBain caught Joonas Donskoi in the face with a high stick. Five seconds into that penalty, Patrick Marleau stopped the puck with a skate, kicked it to his stick, and put the puck in the net. Assists went to Logan Couture and Brent Burns.

The Kings got on the board just 69 seconds later when Luke Schenn’s shot from the blue line got by Martin Jones. Trevor Lewis was in front of Jones, wrestling with a Sharks defender. As the shot came in, Lewis fell into Jones. Coach DeBoer challenged the goal for goaltender interference but the call stood up. The goal went to Lewis, with assists to Luke Schenn and Kris Versteeg.

The game got a little more interesting at 6:44, when Schenn took a shot through a long line of traffic and beat Jones, closing the gap to one goal. Assists went to Anze Kopitar and Marian Gaborik.

After that, the Kings tried more of those shots, but Jones seemed to see them better. The Kings kept pushing, they caught up on the shot clock, and as the final minutes ticked away, the game lost none of its intensity. The Sharks spent a lot of time with the puck but they were not getting the shots or the chances they had before. Even with the Kings net empty, the Kings kept the Sharks from taking good shots. The Sharks managed a couple of shots from their own zone but missed the net.

With 18.3 seconds to go, Los Angeles took their time out, then sent six skaters back on the ice for an offensive zone draw. It was to no avail as Game 4 slipped away from the Kings.

Game 5 will be back in Los Angeles at Staples Center on Friday.