Photo credit sfgate.com: Oakland Raiders wide receiver Antonio Brown shown in photo during his signing with the team during happier times threatened Raiders general manager Mike Mayock at practice on Thursday over his recent fines from the team.

On Headline Sports with Tony:

#1 Oakland Raiders wide receiver Antonio Brown threatened Raiders general manager Mike Mayock after he was fined $53,000 for leaving camp twice. Don’t be surprised if Brown is cut. Brown also has not gotten his $30 million from his current contract and may not get it.

#2 The Oakland A’s held a presser last Tuesday afternoon at Jack London Square with team president David Kaval, who stood in front of a number of white cranes that help lift cargo shipments. Kaval said rather than remove them they would be part of the new stadium landscape kind of a conversation piece.

#3 It’s just simply a deal that has to get done. Kaval acknowledged that the environmental report which includes topic on toxic clean up, mass transportation, traffic conditions, and the railroads that circle the prized area where the A’s new ballpark is supposed to be built on.

#4 The New Orleans Pelicans’ Lonzo Ball said that his father Lavar’s brand sneakers The Big Baller ZO2 brand fell apart after each quarter “If you literally have those shoes from those games, they’re exploded,” Ball said. Not the ringing endorsement from the off spring of the founder.

#5 The Sacramento Kings owe Harrison Barnes $2.1 million. Barnes, who played for the Kings two different times, is owed the money after the Kings who originally signed him for $12 million and sent him to the New Orleans Pelicans with DeMarcus Cousins in 2016. After Barnes returned to Sacramento in 2018-19, he was paid but with $2.1 million left. Bottom line — how much will Barnes be missed in Sacramento?

#6 The Oakland Raiders kick off on Monday Night Football at the Oakland Coliseum to start Week 1 against the Denver Broncos. How do you see Raiders quarterback Derek Carr matching up against Broncos starter Joe Flacco in this one?

Tony does Headline Sports each Thursday at http://www.sportsradioservice.com

On a Tuesday night in the Staples Center, the Sacramento Kings loss a roller coaster game to the Los Angeles Lakers, 99-86. In a always anticipated Fox vs. Ball match up, it was pretty even, Fox shot 6-for-16 from the field with 15 points, three assists, and one rebound, while Ball struggled from the field shooting 2-for-10, but had 11 assists and 11 rebounds. Tonight the Lakers channeled their inner “showtime,” and frankly ran the Kings out of the building, scoring 35 points via fast break.

The Kings put themselves in a hole quick, as the Lakers went on a 17-0 run and went up 24-6 only five minutes into the game. Despite being down early, the Kings led by Bogdan Bogdanovic and De’Aaron Fox who had 10 of his 15 points in the first quarter came surging back with a run of their own, cutting the Lakers lead to just 31-27 at the end of the first quarter.

Sacramento trailed only 53-52 going into halftime, but frustration began to kick in when the Kings came out on the floor for the second half. The outside shooting of Brook Lopez and the inside presence of Julius Randle was too much for Sacramento to handle. Despite Los Angeles turning the ball over 25 times, the Kings shot a minuscule 34% from the field and never gave themselves a chance to get back in the game scoring only 12 points in the fourth quarter.

The Sacramento Kings will try their luck on Thursday with the other team from “La La Land”, the Los Angeles Clippers, who continue to battle with injuries to key players such as Blake Griffin and Patrick Beverly. With the first half of the season winding down, the Kings and Lakers now sit with the same record of 13-27. 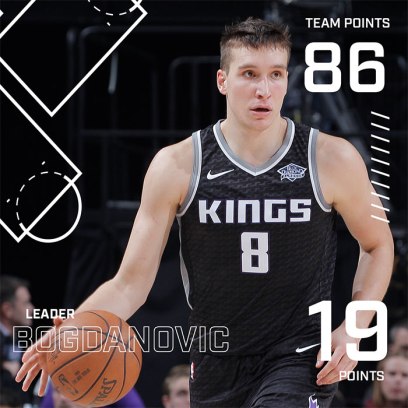 Tying his career high with 19 points, Bogdanovic was key in keeping the Kings in the game for as long as they did. Bogey shot 7-for-13 from the field with 4 assists and 2 rebounds. Despite one of his most efficient games of the year, it wasn’t enough to slow down a speedy Lakers team.

Kosta Koufas: 15 rebounds, one away from career high

Randle was the most dominant player on the floor tonight with 22 points, 14 rebounds and six assists. Bringing energy off the bench, Randle opened up the floor for his teammates tonight with a heavy presence down low and reckless abandon to the rim.

30 assists as a team, 11 of which came from Lonzo Ball

Two players with a double-double

The third preseason game of the year for the Kings was a premiere matchup between Pacific Division rivals. The Kings and the Lakers are both very young teams that are trying reestablish themselves as legitimate playoff contenders in the NBA Western Conference.

Frankly, neither of these teams will be playing a game after the end of the regular season in April. That being said — both the Lakers and Kings are going to be much more entertaining to watch in 2017-18 than they were last season with the players they acquired in the draft and in free agency.

The game on Sunday night at the T-Mobile Arena in Las Vegas was not a “beautiful game”, but it was an entertaining game. The Lakers established a big lead in the first quarter and then the Kings fought their way back into the game in the second period.

The Kings actually took the lead in game in third quarter behind 22-9 run but they would not be able to hold on to that lead in final quarter of the game. When the final buzzer sounded, the Lakers had held on to record their first win of the preseason 75-69 over the Kings before a decidedly pro-Laker crowd in “Sin City”.

There were really no losers on Sunday night in Las Vegas

Both the Kings and Lakers donated their proceeds from the game on Sunday night to victims and first-responders of the mass shooting that happened last Sunday in Las Vegas. The donations will go to the MGM Grand Foundation who will administer the distribution of the proceeds.

This was a very nice gesture on the part of both teams.

The Ball vs Fox matchup did not happen again

The summer league rematch between Lonzo Ball and De’Aaron Fox did happen due to an injury reported by Ball. That brought out many comments about Ball not wanting to be embarrassed by Fox the way he was in the UCLA — Kentucky matchup.

On Sunday, it was announced that Ball would not be available due to an ankle problem. Fox would not have been able to play in the second-half due to a lower back bruise suffered in the first-half of the game.

Do not worry. The big face off is going to happen during the regular season and it will be worth the wait.

Neither team had impressive stats in the game

Sacramento shot 25-for-80 (31.2-percent) from the floor. They connected on just 7-of-25 (28.0-percent) for 3-point attempts. Those are not the kind of shooting numbers that will win games in the regular season. Sacramento went 12-for-16 (75.0-percent) from the free throw line. The percentage was fine but the number of attempts was too low.

Sacramento grabbed 37 rebounds (5 offensive). They recorded 15 assists and 12 turnovers which is not an acceptable ratio. The Lakers scored 10 points off the Kings 12 turnovers.

The Lakers hauled in 49 rebounds (2 offensive). They recorded 21 assists and 20 turnovers which is not acceptable to any coach. The Kings scored 18 points off the Lakers 20 turnovers.

The Kings used just 11 players in the rotation on Sunday night.

Julius Randle posted a double-double by putting up 17 points and pulling down 10 rebounds. Rookie Kyle Kuzma dropped in 15 points. Many observers feel that Kuzma could be a bigger story than Ball this season but remember this is just the preseason. Brook Lopez scored 12 while Jordan Clarkson added 10 points.

Alex Caruso led the Lakers in assists with four and Kuzma had three.

Interesting stat of the game

When you look at the stats, you know this was not a great field goal shooting game. It really became an “old style” NBA battle in the paint contest. Sacramento scored 24 points in the paint (12-for-28) while the Lakers scored 40 points in the key (20-for-34).

The Kings (1-2) will be back in action on Monday night in Sacramento when they will host the Portland Trail Blazers (2-1). Tipoff is scheduled for 7 p.m.

Charlie O talks with Jerry Tipton – sports reporter for Kentucky.com and the Lexington Herald-Leader – about Kentucky Wildcats top rated point guard De’Aaron Fox. Fox has been projected as a possible pick for the Kings with their number five selection in the NBA Draft.

You will gain some great insight from a reporter who followed Fox all season long.