Sacramento – The Kings trailed the New York Knicks 103-100 with 2.6-seconds remaining in the game. New York had to inbound the ball in the frontcourt after calling a timeout. The inbound pass came to Carmelo Anthony who was immediately fouled by Rudy Gay before any time could come off the clock. The only problem with the plan was the fact that Anthony was a perfect 10-for-10 from the free throw line in game up to that point.

Incredibly, Anthony stepped up to the line and promptly missed the first first free throw and the sellout crowd began to buzz. Anthony shot the second free throw and unbelievably missed again.

DeMarcus Cousins grabbed the rebound and ran as close to midcourt as he dared. The giant of a man then heaved a what was estimated to be a 52-foot desperation shot at his basket that hit the rim and then rolled out. For a few micro-seconds the thousands of Kings fans in attendance thought they were going to witness a miracle, then reality hit and the big crowd began to exit the Golden 1 Center knowing their team had lost the game.

Each team was missing a key player in the game

The Kings played the game without Matt Barnes who was held out of the game for what was called “rest”. Barnes of course has been at the center of a controversial story about a fight that allegedly took place in a New York City night club early last Monday morning. Rumors have been swirling that Barnes would be arrested by NYPD for his involvement in the incident. Barnes has also been named in a lawsuit that has been filed by two of the alleged victims of the brawl.

In his postgame press conference, Kings head coach Dave Joerger indicated that he believed Barnes would be available to play against the Jazz in Utah on Saturday night. Barnes was on the bench in street clothes for the game Friday night.

The Knicks were without Derrick Rose who is suffering from lower back pain. Rose had to miss the game on Wednesday night in New York City versus the Cavaliers due to the same problem.

NYK head coach Jeff Hornacek said before the game he was hopeful Rose would be available for the game on Sunday when his team faces the Lakers in Los Angeles.

The Kings (8-13) shot much better in the first half against the Knicks on Friday night than did last Sunday in the Garden when they shot under 30-percent. However, the Kings shot under 40-percent in both the third and fourth quarters of this game which helped lead to their demise.

Cousins led the way for the Kings

“That was definitely a good basketball game. A couple of things came back and bit us. We gave up eight points at the end of the first, second and third quarter on last possession plays. In a close game, those things add up. We struggled to struggled to score the basketball tonight. We turned them over 17 times and scored 25 points off of that but outside of that we just didn’t make a lot of shots. Especially from the perimeter, we did not gain a lot of shots from the perimeter so it may jam up the paint on us. Good basketball game.”

Surprising stat of the night

The Kings are not a team that is outrebounded by their opponents on a regular basis. If the other team does record more rebounds, the difference is usually not dramatic.

On Friday night, the Knicks outrebounded the Kings 54-39. Kings head Dave Joerger felt their length and the fact the Kings played “small” much of the game is what allowed New York to establish such a margin.

New York (13-10) rode the hot hand of Carmelo Anthony in the first half and then relied on efforts of Kristaps Porzingis and their bench in the second half.

“He had a great game. When he’s scoring, he’s getting the ball in a good position from our guys where he can drive it. We put him in some trouble later on in the game, giving him the with like four seconds to go, not a good thing to do. We talked about having to get to the offense a little bit quicker. Late in the game, we kind of walked to our spots. Carmelo, when we go to him, he can pump fake, he can drive, he’s making passes. He’s playing an all-around game, like a star does.”

Up next for the teams

The Kings go right back into action on Saturday night as they play the back end of a back-to-back set on the road in Utah against the Jazz.

The Knicks are off until Sunday when they will play game two of their five-game road trip in Los Angeles versus the Lakers. 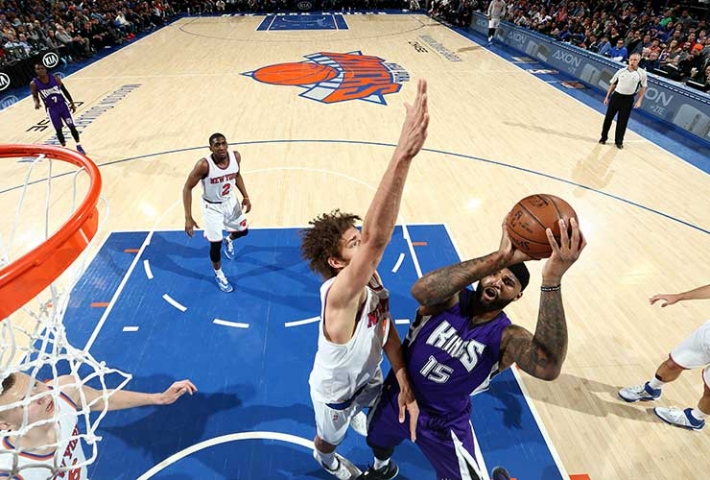 “It (the game) had a lot of ugly to it, but it’s a win,” said Kings head coach George Karl after his team beat the New York Knicks 88-80 in Madison Square Garden on Sunday night.

In full disclosure, the Knicks played without Carmelo Anthony who was sidelined with a migraine that he experienced during the game in Washington on Saturday. The Knicks are 0-8 this season when “Melo” is not in the line up. Much like the Kings without Cousins, NYK is not the same team when their All-Star player is not on the floor.

The Kings used defense to win this game. This may have the best defensive effort by Sacramento all season. The Kings held the Knicks under 20 points in first, third and fourth quarters. Sacramento did have a major defensive lapse in the second quarter when New York scored 35 points, but unlike other games this season, the Kings were able to regain their defensive footing.

The 88 point effort was the Kings lowest scoring total of the season.

Sacramento did an excellent job defending the 3-point arc allowing NYK to hit on just 4-of-19 3-point attempts. The Kings also limited their own turnovers to just 12 that resulted in just nine points for the Knicks.

The stars on offense were the two starting centers. DeMarcus Cousins and Robin Lopez had 20/20, double-double games. Cousins scored 24 points and grabbed 20 rebounds to go with four assists and two blocked shots. Robin Lopez put up 23 points and hauled in 20 rebounds for New York.

Rudy Gay turned in a 17-point performance versus the Knicks. Gay did not have a spectacular night shooting going 8-for-21 from the floor and just 1-for-6 from 3-point land.

Darren Collison had an interesting game. Collison scored 13 points. All of those points came in the first half. He played a game-high 40 minutes and dished out six assists.

Rajon Rondo had a very quiet game scoring just two points and distributing six assists. Rondo did not play with his signature headband on in this game.

Omri Casspi led the scoring off the bench for Sacramento. Casspi scored 15 points hitting on 5-of-9 shots from the field.

Kristaps Porzingis – the Knicks rookie sensation – scored 13 points but struggled shooting from the floor. Porzingis hit on just 6-of-17 shooting and was 0-for-4 from beyond the 3-point arc.

The Chicago Bulls will play a major role for both teams this week.

The Kings traveled to Chicago after the game and will play the Bulls on Monday night.

The Knicks are off until Wednesday when they will play the Bulls in the Windy City.