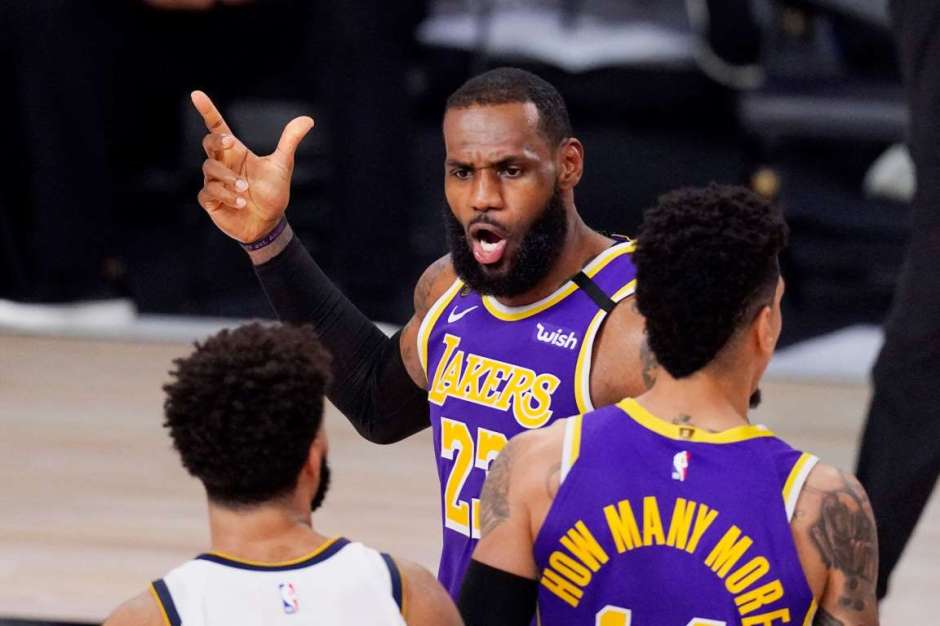 LeBron James leads the Los Angeles Lakers in the NBA Finals against the Miami Heat which started on Wednesday night in the bubble at Disney World in Bradenton Fl. Here he exchanges words with game officials during the NBA Western Conference Finals against the Denver Nuggets Sep 26, 2020 (AP News photo)

On Headline Sports podcast with Jessica:

#1 Jessica taking a look at the NBA Finals game 1 was on Wednesday night in the bubble at Bradenton Fl at the Disney World bubble the odds makers have the Los Angeles Lakers favored in the series as they defeated the Miami Heat 116-98.

#3 A sonic boom shook up the French Open on Monday, the boom startled fans, players and those working the Open thinking it was an explosion or fireworks nearby.

#4 The Denver Broncos have no intention of bringing former NFL quarterback Colin Kaepernick on board with the team according to Broncos head coach Vic Fangio Kaepernick’s name hasn’t come up in discussions and Fangio and team general manager John Elway look for someone else “who will be a the best fit.” Does this look like collusion is still in effect against Kaepernick?

#5 No one expected the San Francisco Giants to amount to anything close to a post season team and while the Giants just missed making the last and final eighth spot in the National League Wild Card race by one game they weren’t expected to compete for a playoff position during the 60 game regular season and so the Giants manager Gabe Kapler’s name has been floated for National League manager of the Year how do you see his chances to get the award?

Join Jessica every other Thursday for Headline Sports at http://www.sportsradioservice.com 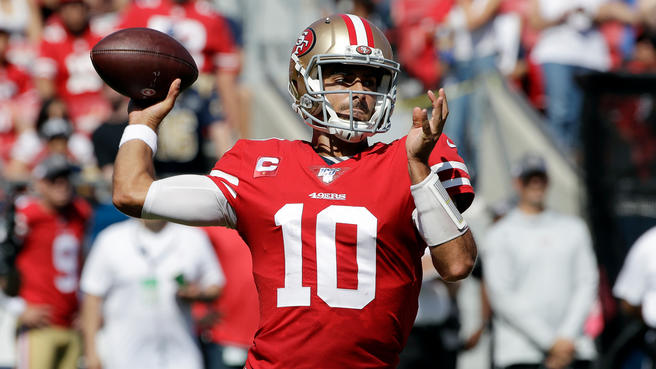 On the 49ers podcast with Joe:

#1 The 49ers are coming off another win from last week in Washington in a muddy, rainy game. The Niners got three field goals out of kicker Robbie Gould. Good enough for the 9-0 victory.

#2 In spite of the win, there were some things that quarterback Jimmy Garoppolo would have like to accomplish like throwing a couple touchdowns. Was it the rainy conditions that prevented that or were Washington’s pass rushers not giving him enough time?

#3 Talk about the acquisition of wide receiver Emmanuel Sanders, who has 30 catches, 367 yards and two touchdowns. Head coach Kyle Shanahan said “Emmanuel is the man” at wide receiver.

#4 Sanders doesn’t come to Santa Clara without some nuances. While in Denver, he had a fight with a teammate Courtland Sutton in practice. Sanders said Denver was “like living in a world of suck” and finally, Denver general manager John Elway said of Sanders: “Emmanuel had issues and we had issues that’s why it was a good time for us to go in a different directions.”

#5 The 49ers host the Carolina Panthers this Sunday. Can Garoppolo have a better day throwing against the Panthers than he did against Washington in this one coming up?

Joe Lami does the 49ers podcasts each Friday on http://www.sportsradioservice.com

On the Headline Sports podcast with Tony:

#1 Denver Broncos general manager John Elway says that quarterback Joe Flacco, who joined the Broncos from the Baltimore Ravens in March, is a player that he really looks forward to break the string of quarterbacks that didn’t work out for the Broncos in the past.

#2 Arizona Cardinals offensive lineman Desmond Harrison, who was arrested for attempting to strangle a woman, was released by Arizona today. Harrison had joined the Cardinals in June after playing for the Cleveland Browns. Harrison had eight games at left tackle for Cleveland.

#3 Former Oakland Raider wide receiver Mattavias Bryant applied for reinstatement after being suspended for drug abuse. Bryant has missed 36 of 80 games. Bryant is serving his third suspension and the NFL as of now will not reinstate him.

#4 The NFLPA and the NFL are close to an agreement on the collective bargaining agreement. The two sides are trying to iron on some other issues. Both sides report that meetings have been constructive and making progress.

#5 Pittsburgh Steelers head coach Mike Tomlin said he wasn’t there to be understood. One players who didn’t get along with him was Antonio Brown who left for Oakland. Tomlin says he’s fair to everyone, although he might treat others differently.

Tony does Headline Sports each Thursday at http://www.sportsradioservice.com