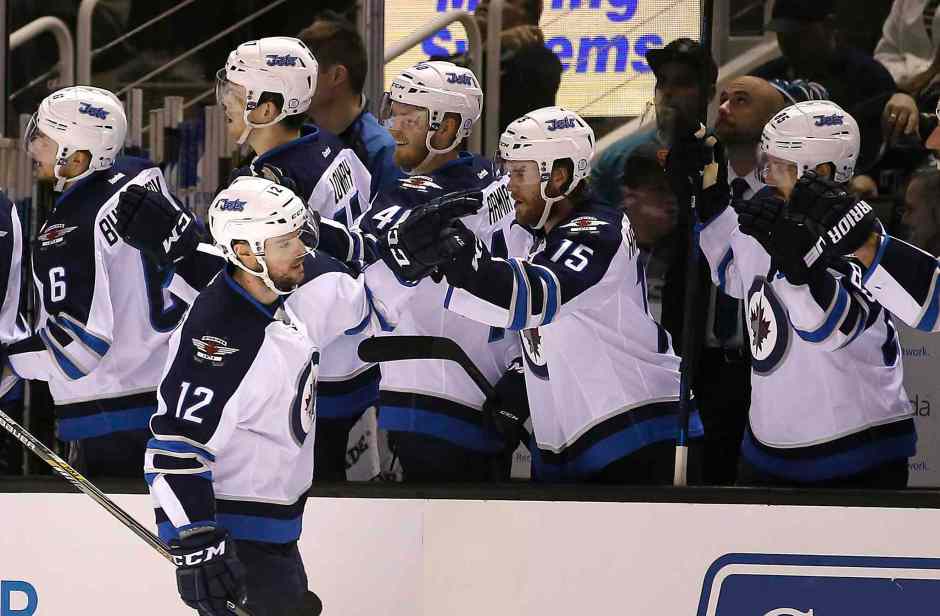 SAN JOSE– On home ice Saturday, the San Jose Sharks fell by a score of 4-1 to the Winnipeg Jets. It was yet another disturbingly lackluster performance from the Sharks, seen almost exclusively at home this season despite a remarkably good road record. Of the overall performance Saturday, head coach Pete DeBoer did not mince words:

That was an egg, it was just… I don’t have an explanation. Top to bottom, really poor effort, poor execution, sloppy, soft, not enough adjectives to describe it. You have to give Winnipeg credit, they were desperate, they won all the races, they won all the battles, they won the goaltending battle, not much more then that, it pretty much sums it up.

The Sharks seemed to have the game well in hand for the first ten minutes. Outshooting Winnipeg and controlling most of the play, it was probable that they would have the first power play. They did.

At 12:05 of the first, Ben Chiarot went to the box for delay of game. The first minute of the power play went fine, but then the Sharks started having some trouble getting through the neutral zone. The Sharks’ game of keep away was interrupted by an interception of Joel’s Ward’s backhand pass. The interloping Blake Wheeler skated in with Drew Stafford for a two on none against Martin Jones. The short-handed goal went to Stafford. It was just the second short-handed goal scored against San Jose this season.

The Sharks did not score on that power play, and they were on their heels for most of the rest of the period.

As the second period began, the shots stood at 8-7 Sharks, the score 1-0 Jets. The first hits came in the Sharks’ zone, as the Jets made the first move. During a four player puck battle along the boards, someone caught Joe Thornton near the right eye, but nothing was called.

At 2:45, Joel Armia skated into the Sharks’ zone, went around Marc-Edouard Vlasic, and put the puck on net. Matt Halischuk was standing by at the crease. With Justin Braun on hand but unable to stop him, Halischuk scored his first of the season from very close range.

Penalties started to stack up then, with Toby Enstrom going to the box for interference at 2:58, and Joe Pavelski going for an illegal heck to Bryan Little’s head just 18 seconds later. The four on four time created by those penalties favored the Jets, and they passed the Sharks up on the shot clock.

Bryan Little did go to the room for further evaluation but returned to the game before the period was half over.

At 8:29, Dustin Byfuglien was called for slashing. Under a minute after that, Brent Burns got the Sharks on the board with a hard shot from just above the faceoff circle. Assists went to Joe Thornton and Patrick Marleau. The assist extended Thornton’s point streak to eight games.

On the next shift, the Sharks finally managed to stop the Jets in the neutral zone, and then Tommy Wingels tried to take the puck back the other way. Instead, he was tripped by Toby Enstrom and the Sharks went on another power play.

The power play started with a rush by the Jets into the Sharks’ zone. The Sharks stopped them from scoring another short-handed, but when they did get set up in the o-zone, San Jose’s plan seemed too complex to work. They made too many passes, too creatively executed, while time ticked off the clock. With 47 seconds left in the power play, they were taking a draw in the defensive zone.

With 5:31 left in the second, Justin Braun went to the penalty box for delay of game after sending the puck over the glass. It took the Jets 26 seconds to score on their power play. The goal was Mathieu Perrault, with assists going to Dustin Byfuglien and Blake Wheeler.

Joe Pavelski went to the box again witbh 4:02 left in the period, this time for too many men on the ice. The Sharks did kill that penalty, and showed a touch of vim in the final minutes of the period. Tommy Wingels even got tangled up with Dustin Byfuglien after the buzzer. Fortunately for the Sharks, nothing came of that as the officials intervened.

Al Stalock was in the Sharks’ net to start the third period. He had only been there for a minute and 13 seconds when he skated to the bench for a delayed penalty all. Blake Wheeler went to the box for tripping Tomas Hertl. The Sharks’ power play created a few chances but the Jets’ penalty killers broke up most of their attacks quickly.

Tommy Wingels and Matt Halischuk went to the box shortly thereafter for unsportsmanlike conduct. Two minutes of four on four did not produce any more goals.

Pete DeBoer has not done a lot of in-game line changes this season, but by the third period on Saturday, only one forward line and one defensive pair looked as it had during the first. When the game started, Melker Karlsson was on a line with Joe Pavelski and Joe Thornton, Couture was back with Marleau and Ward. Hertl, Wingels and Nieto were a third line, while Donskoi, Tierney and Zubrus made up the fourth. Dillon was paired with DeMelo, Burns with Martin and Vlasic with Braun.

In the third period, Karlsson was with Tierney and Zubrus. Donskoi was up with Marleau and Ward, and Logan Couture was out with Thornton and Pavelski. On defense, Paul Martin ended up paired with Dylan DeMelo, and Brendan Dillon with Burns.

Of course, the netminders had also swapped positions.

Al Stalock tried a nice stretch pass to Joel Ward with about six minutes left, but Ward could not do much with it. The puck got to him but he didn’t have any help in the zone.

Al Stalock went to the bench for the extra attacker with nearly three minutes left in the game. With 2:43 left, the Jets scored into the empty net after handily escaping the Sharks in the neutral zone. The goal was Nikolaj Ehlers’ and it was unassisted.

The Sharks next play the Detroit Red Wings. That game will be on Thursday, January 7, at SAP Center, at 7:30 PT.