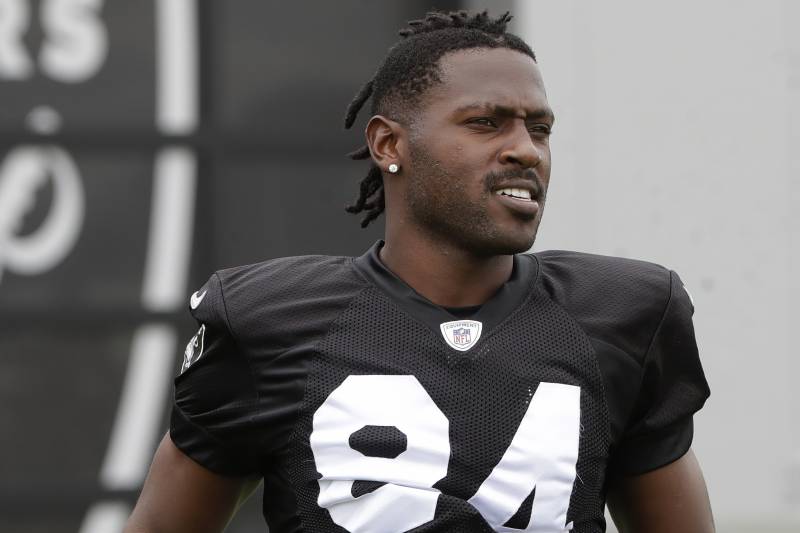 On the Raiders podcast with J Hawkes:

#1 Joe, Oakland Raiders running back Antonio Brown has been all the news the last 24 hours, his latest antic was threatening to punch Raiders general manager Mike Mayock until he was restrained.

#2 There wasn’t physical violence but there were threats of violence according to reporters who were there to witness the confrontation between Brown and Mayock.

#4 Head coach Jon Gruden when asked about the run in said that he’s busy on the field trying to get his players ready for Monday Night Football for opening night and he’s focusing on the guys who are working hard.

Joe Hawkes Beamon does the Raiders podcast each Friday at http://www.sportsradioservice.com 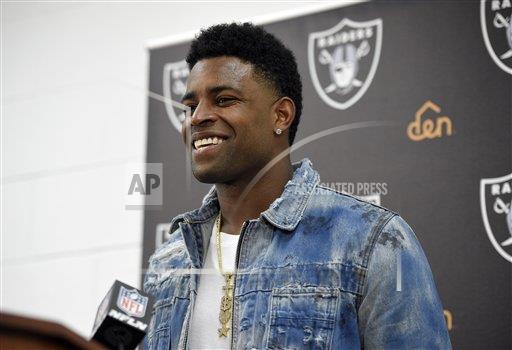 AP photo: The Oakland Raiders wide receiver looks relieved, cool and collected after a narrow win against the Baltimore Ravens at the post game press conference on Sunday for the Raiders third straight road win

BALTIMORE, MD — Winning on the road in the NFL is a tough feat for any team to accomplish.

The Oakland Raiders are demonstrating that they have no problems winning on the road, after picking up their third win of the season with a 28-27 nail-biting win over the Ravens in Baltimore. Oakland won in New Orleans (Week 1) and in Tennessee (Week 3).

Quarterback (A+) – What more can you ask Derek Carr to do on Sunday?

The Raiders starting quarterback played quite well, tying a career-high with four touchdown passes on 25-of-35 passes for 199 yards. But the game was not for the faint of heart, as Oakland couldn’t maintain a nine-point fourth quarter lead.

With Baltimore now clinging to a 27-21 lead in the fourth quarter, Carr engineered a 6-play, 66-yard drive that resulted in a 23-yard strike to wide receiver Michael Crabtree in the back of the end zone with 2:12 left.

For the season, Carr has thrown for 1,078 yards, nine touchdowns, and just one interception, giving Raider Nation confidence that Carr is the real deal.

In 11 red zone possessions this season, Oakland has scored 10 touchdowns which leads the league.

Running Backs (C) – Oakland’s ground attack mustered up just 62 yards, 28 of those by rookie DeAndre Washington who led all Raider rushers with 30 yards.

Washington’s fumble in the fourth quarter almost proved costly for the Raiders, after the fumble would set up a 3-yard touchdown run by Ravens’ running back Terrence West.

Richard did factor in on Oakland’s first score of the day, returning a 47-yard punt to the Ravens’ six-yard line. Carr would find wide receiver Seth Roberts for the touchdown on the next play, giving Oakland a 7-0 lead in the first quarter.

Offensive line (B) – A group that was missing left tackle Menelik Watson, the offensive line kept Carr up right for the majority of the day, yielding no sacks to a vaunted Ravens defensive front anchored by linebacker Terrell Suggs and defensive lineman, Timmy Jerningan. Both Suggs and Jerningan entered Sunday’s contest tied for the team lead with three sacks each.

Wide Receivers/Tight Ends (A-) – Crabtree has turned into Carr’s favorite target, as evident of the 12 times the Raider signal-caller target the talented wide receiver.

Crabtree was unstoppable against Baltimore, hauling in seven passes for 88 yards and three touchdowns and looking more and more like a game-changer the Raiders envisioned. With seven catches Sunday, Crabtree has gone 21 straight games where he’s caught at least three passes in a game.

The two-time Fred Biletnikoff Award winner as the nation’s top wide receiver in 2007 and ’08 out of Texas Tech, leads all Oakland wide receivers in catches (26) and touchdowns (4), and is second behind fellow wide receiver Amari Cooper’s 318 yards with 308.

Cooper finished with five catches (six targets) for 48 yards, and is still looking for his first receiving touchdown of the season after catching six in his rookie campaign last season.

Defensively, Oakland yielded 412 total yards and 25 first downs to Baltimore. Oakland’s defense did slow down Baltimore in the first half, surrendering just six points on seven offensive drives for Baltimore and forcing the Ravens to punt five times.

Defensive Line (C+) – The defensive line allowed running back Terrence West to rush for 113 yards on 21 carries and a touchdown Sunday. Oakland is still allowing physical running backs to run right through them, even though having defensive tackle Mario Edwards out does hurt stopping the run.

But seeing defensive end Khalil Mack record his first sack of the season in the fourth quarter off Ravens’ quarterback Joe Flacco was a tremendous site for Oakland. Mack was having trouble getting to the opposing quarterback this season as he finish with 15 sacks, second in the NFL to J.J. Watt’s 17.

Linebackers (B-) – Bruce Irvin recorded his third forced fumble in the fourth quarter (one of two  off Flacco in Ravens’ territory was a huge turning point for Oakland, who was holding on to a 14-12 lead.

Irvin, who also recorded his second sack of the season,  has been a nice addition for Oakland this season after spending his first four seasons in the NFL in Seattle and was part of the Seahawks team that won Super Bowl XLVIII.

Secondary (B) – Things got dicey for the Raiders in the fourth quarter, trying to maintain a nine-point lead at 21-12, especially trying to stop Ravens wide receiver Steve Smith Sr.

Smith Sr. took a Flacco slant pass 52 yards for his first score of the season, cutting Oakland’s lead to 21-19 following the extra point. The 16-year vet finished with eight catches for 111 yards and a touchdown.

The secondary held Flacco to 298 yards on 32-of-52 passes. On 30 dropbacks in the first half, the Raiders harassed Flacco, hurrying him seven times, and hitting the Super Bowl winning quarterback four times.

The Raiders now head home for a date with their AFC West rival, the San Diego Chargers next Sunday at the Oakland Coliseum. 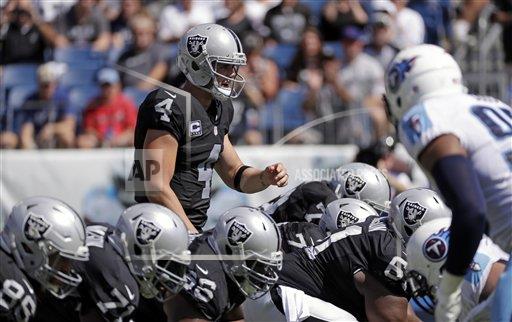 AP file photo: Oakland Raider quarterback Derek Carr (4) during an audible against the Tennessee Titans Sun Sep 25th will throw against the Baltimore Ravens on Sunday

OAKLAND, Calif — With all due respect to the Atlanta Falcons, who gave Oakland their only loss on the young season: you are still a suspect team with an inconsistent pass rush and a quarterback in Matt Ryan that is a great fantasy football league stat filler, not a championship quarterback.

Or the New Orleans Saints and the Tennessee Titans, whom Oakland has defeated this season.

Oakland faces their toughest test yet of the season, against Ravens team in Baltimore Sunday  in Week 4 in a game that could have a significant determine playoff seeding in the AFC.

Raiders starting quarterback Derek Carr lit up a depleted Ravens’ defense in the two team’s match up last season in Oakland, throwing for a career-high 351 yards on 30-of-46 passes, three touchdowns and one interception in the Raiders’ 37-33 victory.

Carr’s 12-yard touchdown pass to wide receiver Seth Roberts with 26 seconds left in the game capped off a 9-play, 80-yard drive after Carr went 7-of-9 on the final drive.

Last week, Carr completed 21-of-35 for 249 yards, one touchdown, and one interception leading the Raiders (2-1) to a 17-10 victory in Nashville, their second road win of the season.

For the season, Carr has thrown for 867 yards, five touchdowns, and one interception.

Oakland’s ground game racked up 123 yards, with starting running back Latavius Murray scoring his third rushing touchdown on the season.

Oakland’s 32nd ranked defense, who gave up 500 yards of total offense in back-to-back games to start the season, held Tennessee to 393 yards.

The Ravens are coming off a tight, 19-17, road victory in Jacksonville Sunday, thanks to a Justin Tucker 54-yard field goal with 1:02 remaining in the fourth quarter.

Baltimore is off to it’s third 3-0 start in franchise history, their first since 2009.

Baltimore starting quarterback Joe Flacco is one of the best quarterbacks in the NFL entering his ninth season, already with six 3,000-yard passing seasons, a 10-5 playoff record, and a Super Bowl ring.

Even though Flacco has passed for 774 yards, he’s been uneven with the football, throwing three touchdowns and four interceptions, two against a young Jaguars’ defense last week.

Oakland should have their hands full with wide receiver Mike Wallace, who signed with Baltimore during the offseason.

Wallace, who is one of the more dangerous deep-ball receivers in the NFL, has caught all of Baltimore’s receiving touchdowns.

On the season, Wallace has 10 catches for 166 yards, while fellow wide receiver Steve Smith Sr. is second on the team (behind tight end Dennis Pitta’s 18 catches), with 16.

Smith Sr. registered 10 catches for 150 yards last year against Oakland and can go off in a heartbeat, if Oakland doesn’t loses track of him.

Baltimore’s defense were relentless in Week 3 against Jacksonville, holding the Jaguars to just 216 total yards. The Ravens held Jacksonville to just 2.3 yards per rush on 21 carries for 48 yards.

Outside linebacker Terrell Suggs, now in his 14th year with Baltimore, is tied for the team lead in sacks with defensive tackle Timmy Jernigan with three.

Jernigan should see plenty of former Ravens’ offensive lineman Kelechi Osemele, who returns to Baltimore for the first time after signing a five-year, $58.5 million deal with Oakland in the offseason. Osemele spent his first four seasons with the Ravens from 2012-15.

Oakland, having to make the near five-hour cross-country flight, looks to improve on a 1-16 record in their last 17 games in the Eastern time zone with a victory.