The Aggies lost their final game of the GCI Great Alaska Shootout to the Oakland Golden Grizzlies of Michigan 79-66 on Saturday. The loss dropped the Aggies into sixth place in the tournament with a 1-2 record.

“I told the team that I was pleased overall with their effort, and I’m encouraged, not discouraged, by this tournament and where they are thus far.” said UC Davis head coach Jim Les , “This team has a huge ceiling, I love everyone’s competitive nature.”

Oakland’s 3-point shooting did the Aggies in

The Golden Grizzlies shot 41.7-percent (10-for-24) from 3-point range. They hit seven of those 3-pointers in the first half. The Aggies hit 4-of-10 from beyond the 3-point line. Both teams hit 25 two-point field goals.

“That is a good basketball team (Oakland) that is going to win 20 to 25 games, win their league (Horizon) and earn a spot in the NCAA Tournament. I told my team that we went toe-to-toe with them; we have some things that we need to clean up, but I like where this team is as long as we stay healthy and continue to work,” said UC Davis head coach Jim Les.

What’s next for UC Davis

The Aggies will return to action on Saturday, December 3rd when they will travel to Moscow, Idaho to play the 3-2 Idaho Vandals.

The Sacramento State Hornets lost their opening game in the Eastern Washington University Tournament to the University of San Francisco Dons 77-59 on Saturday. The win lifted the Dons to 4-0 on the season while the Hornets drop to 1-4.

The Dons had four players score in double figures

The Hornets will face the University of Denver Pioneers (1-3) on Sunday at 12:05 PM PST. The Pioneers lost to Eastern Washington on Saturday night 85-80 in overtime. 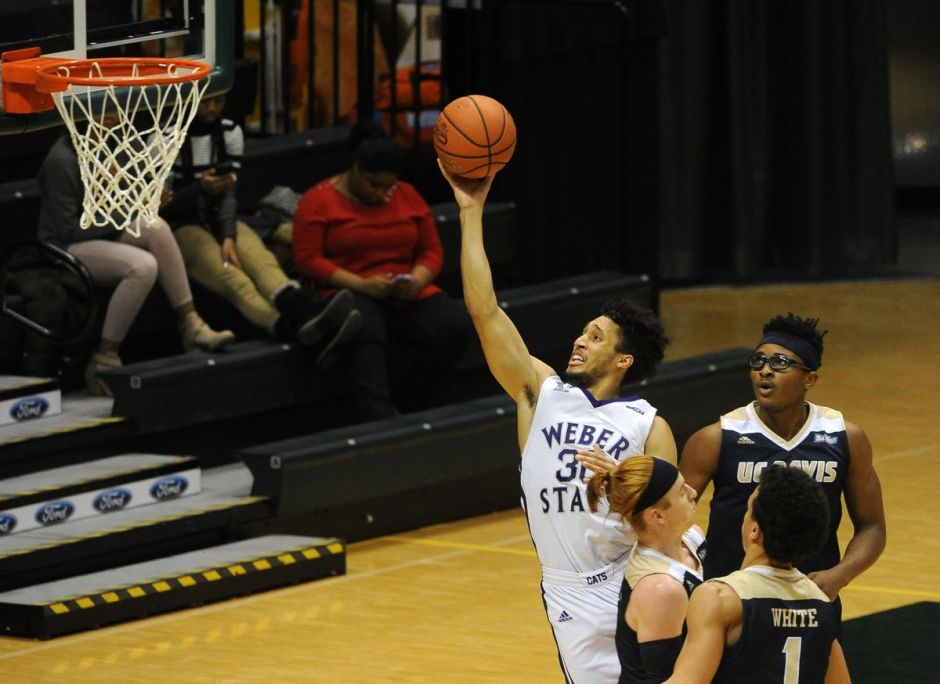 The UC Davis Men’s Basketball team played the defending Big Sky Champion Weber State Wildcats in the first-round of the GCI Great Alaska Shootout on Thanksgiving night. The Wildcats lived up to their reputation of being a very good basketball team coming away with a 86-55 win over the Aggies (4-2).

Weber State put on a scoring barrage in the second half putting up 47 points to 26 points for UC Davis. The Wildcats shot 64.0-percent (16-for-25) from the field in the closing half and hit on 7-of- 13 opportunities beyond the 3-point line. The Aggies shot 34.8-percent in the second half and went 3-for-7 from long range.

UC Davis held a 20-9 lead in the first half, but Weber State hit 6-of-12 shots from behind the 3-point arc to make a comeback in the half. As the teams went to halftime Weber State held a 39-32 over the Aggies.

Joe Mooney was the Aggies leading scorer with 12 points. He was a perfect 4-for-4 from the floor including two 3-pointers.

“We have a lot of confidence in Joe, he is a good player. He will continue to earn minutes; you can tell that he is becoming more comfortable as the season progresses,” said head coach Jim Les.

No rest for the weary

UC Davis faces a quick turnaround as they will face Drake (1-3) in a 3:00 PST tipoff on Friday. Drake – a member of the Missouri Valley Conference – lost their first game of the tournament to Iona 64-53.

The Aggies will have one more game in the consolation bracket on Saturday at either 1:00 or 3:00 PM depending on the results of the Drake game.

This could be the last Great Alaskan Shootout

This the 39th and possibly the last Great Alaskan Shootout. The tournament has been financially challenged and now the Alaska State Legislature is threatening to reduce the funding it gives the event.

There are so many tournaments in warm weather locations that are more attractive to teams and their fans. There are also the several Las Vegas opportunities. Frankly, the winter conditions in Alaska with temperatures in twenties, snow and six-hours of daylight is not a big draw for fans who like to travel with their team.

Unless the tournament is able to find a larger corporate sponsor or a higher-paying television contract, the Great Alaskan Shootout may be history.

SACRAMENTO–History was made tonight at the Golden 1 Center when the Sacramento State Hornets and the UC Davis Aggies Men’s basketball teams met for their annual “Causeway Classic” game. It was the first NCAA game to be played in the new entertainment and sports complex in the Capital City.

Both programs were winners because of the attention the game drew from the community at large. On the court, UC Davis (4-1) downed Sacramento State (1-3) 81-72.

50-percent was the Aggies number

UC Davis shot 50-percent from the floor (29-for-58). The Aggies also shot 50-percent from beyond the 3-point line (8-for-16). They hit five of those 3-pointers in the second half which helped propel them to the win. Brynton Lemar was the Aggies leading 3-point shooter going 3-for-5 from long range.

The Aggies had five players in double-figures

The Hornets shot 45.5-percent (15-for-33) in the opening half. That allowed them to go in at halftime trailing by just two points. In the second half, that shooting touch went away. Sac State shot just 29.4-percent (10-for-34) in the closing half.

The Hornets 3-point shooting finished at just 25-percent (7-for-28). Head coach Brian Katz pointed at taking too many 3-point shots as one of his team’s weaknesses in the game.

The Hornets had four players score in double-figures

What they said after the game

“We challenged the guys at halftime and these guys responded. They made the changes that were needed, ramped up their physicality and intensity. That turned the tide in tonight’s game, in my opinion,” said UC Davis head coach Jim Les whose team held a two-point lead at halftime.

“I thought we were able to wear down a well-coached Sacramento State team, and take advantage of that fatigue throughout the last 10 minutes of the game,” added Les.

“It is crazy now that the game is over and I am able to look back at that shot. That was never my plan, I was open in the corner and took the shot. I can always tell my kids that I played in the first college game and made the first basket too. They can believe me, or not, but it’s true,” said Darius Graham talking about his three-point basket that was the first collegiate points scored in the Golden 1 Center.

“Their offense is built around penetration and kick. I thought they did a great job looking for him,” Sacramento State head coach Brian Katz talking about the Aggies finding Brynton Lemar on offense.

“I think we shot too many 3’s,” said Katz. “I give their defense credit for that. I don’t like to lose and then make excuses and say we didn’t play well. I think it had a lot to do on how they guarded us. They did a great job with that.”

What’s next for the Aggies and the Hornets

The Aggies head north for the GCI Great Alaska Shootout in Anchorage that begins on Thursday night. Their first opponent will be Weber State. The other teams in the tourney are Drake and Iona.

The Hornets will travel to Cheney, Washington to play in the Eastern Washington Tourney along with San Francisco and Denver on November 26 and 27.

The Kings and the Golden 1 Center announced on Monday night that Stanford and Kansas have been scheduled to play a NCAA Division I basketball game in Sacramento on December 21, 2017. They did not make an announcement about it being a doubleheader, but somehow I have the feeling that Sacramento State and UC Davis might be playing in the same building on that night as well.