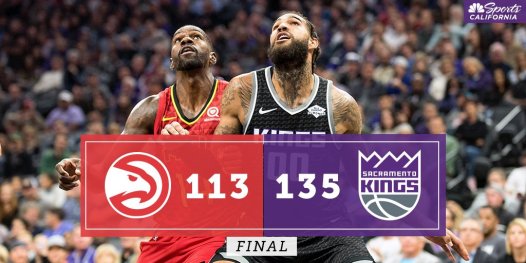 The Sacramento Kings returned to their home court on Wednesday night after going 2-6 on their longest road trip of the season. The team was in need of a rowdy home crowd and a big win.

The Atlanta Hawks entered the game with a 16-33 record, but they did not start the game like a team that is in 12th place in the Eastern Conference. The Hawks opened up a 20-10 lead at the 6:36 mark in the first quarter as they were shooting near 70%. It appeared that the Kings were going to be in for a real fight as they opened their longest homestand of the season.

The Kings second unit stepped on the court and put some life into the game. By the time the buzzer sounded at the end of the first 12 minutes, Sacramento held a 32-31 lead.

The Kings made a statement in the second quarter

The Kings decided not to lift their foot off the accelerator in the second quarter. The team came out kept the pace fast and continued to score at will. They outscored the Hawks 35-22 in the quarter.

Sacramento outscored Atlanta 24-4 in the paint. They scored eight second chance points to none for the visitors. The Kings won the battle of fast break points 7-0.

At the half, Sacramento held a 67-53 lead over Atlanta.

The Kings poured it on in the third

Sacramento smelled the victory and decided to put the game away in the third quarter. Harry Giles III led the way for the Kings as he scored 12 points in just over 10 minutes on the floor. Giles went a perfect 6-for-6 shooting in the period.

Bogdan Bogdanovic scored 10 points in just under eight minutes of playing time. “Bogi” hit 3-of-5 shots including one 3-pointer. He also went a perfect 3-for-3 from the free throw line to go along with his three assists.

The fourth quarter was “garbage” time

That is really not a fair description of the final 12 minutes because there were players who received an opportunity to play that have not had the chance to see the court for a while. All 13 active players on both benches saw playing time in this game.

When the final buzzer sounded, the Kings had won the game 135-113. Sacramento is now 26-25 on the season and is tied for ninth place in the Western Conference with the Lakers just two games out the eighth and final playoff spot.

Atlanta now has a record of 16-24 and is eight games out of the playoff race in the Eastern Conference.

The Kings will be back in action on Saturday night when they will host the Philadelphia 76ers at the Golden 1 Center. Philly is 33-18 on the season and currently is in third place in the Eastern Conference.

The Hawks travel to Utah and will play the Jazz on Friday night.

Sit back and relax as “Chape” and Charlie talk all things Kings on the Press Row Podcast.

Brooklyn, New York – The Golden State Warriors, without star defensive ace Draymond Green who returned to the Bay Area Thursday for the birth of his son, rallied from a sixteen-point halftime deficit to down the Brooklyn Nets 117-101.

The game was very competitive in the first quarter as the Nets led 34-33 at the end of the first twelve minutes. The Nets behind big Brook Lopez and point guard Jeremy Lin drove the lane and were able to score as the Dubs were not playing any defense at all. The Nets owned the second quarter as they outscored the Dubs 31-16 and led by sixteen at the half. The Warriors could not stop Brook Lopez as he tallied 23 in the half. The Warriors went cold late in the quarter and were able to score just 4 points in the last 4 minutes and 44 seconds of play in the half. Brooklyn led 65-49. The Nets started the second quarter on a 9-0 run, and they looked like they were going to upset the best team in the NBA.

However, teams have to play four quarters to win the game. The Nets may have won the first half but the Warriors, behind the stellar play of Kevin Durant, Klay Thompson, Zaza Pachulia, and Steph Curry were no match for the Warriors. The Dubs played defense. They lead the NBA in steals and blocked shots, and they did exactly that as they held the Nets to nineteen in the third quarter and seventeen in the fourth. The Warriors forced the Nets to commit twenty-six turnovers. The Warriors had nineteen steals and seven blocked shots as they showed Brooklyn how good they are. The Dubs outscored Brooklyn 39-19 to take a four-point lead after three and by sixteen in the fourth to win 117-101.

Game Notes- The Warriors improve to 26-4 for the year while Brooklyn drops to 7-21. Kevin Durant led Golden State with 26 points,7 assists, and nine rebounds. He also blocked a shot. Klay Thompson knocked down 23, Steph 15, and Zaza Pachulia had a double-double. Zaza had a season-high 15 points to go along with 14 boards. Quite a performance. David West led the bench scoring with ten, and he blocked two shots. Ian Clark and Andre Iguodala added 8 each. Iguodala snagged six rebounds. The Dubs shot 45.2% from the floor, and they made twelve 3-point shots. They also had good ball movement as they recorded twenty-nine assists.

After the game, Warriors’ head coach Steve Kerr said the players’ “intensity in the third got us going.” The Warriors started the period with a 17-2 run. “That changed the game.”He also said:”I didn’t expect to be down sixteen at the half, but I knew they(Brooklyn) would come out and give us a hell of a fight.” He remarked that the “transition defense in the first half was horrible and that no matter who you play, you have to defend” The Warriors did just that in the second half as they came back from the sixteen-point deficit to record the 26th win of the year.

The Warriors play the Pistons in Detroit Friday night. Game time is at 4:30 pm. The Warriors then play the Cleveland Cavaliers Sunday in Cleveland. Game time for the big game is at 11:30 am. 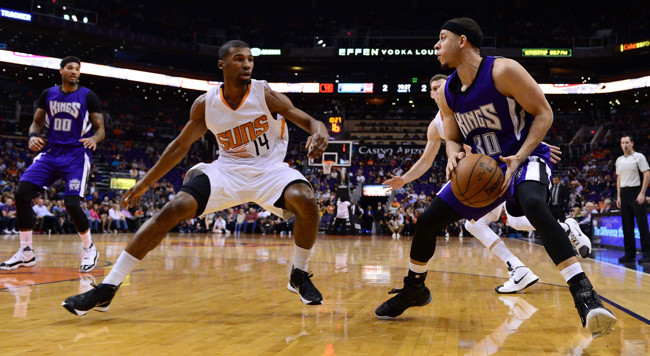 Now that the draft is over, the Kings have started the search for their bench players. The real search is for who is going to play point guard and who can help the team at shooting guard.

The point guard situation has become clouded because of the situation with Darren Collison. Unfortunately, Collison has been indicted in a domestic violence case and will almost certainly face a suspension from the NBA related to the situation. When Collison will be available to play for the Kings is a major unknown at this point.

Last season’s starting point guard – Rajon Rondo – is a free agent and had a very productive year for Sacramento. The consensus is that Rondo would be open to signing another short-term contact of one to two years to stay in with the Kings. Sacramento does not have “Bird Rights” on Rondo so his salary would have to come out of this year’s cap money.

The big question is – do you want Rondo at the point again this season? There is no doubt that Rondo can produce assists and is capable of scoring in spurts. There is also no question that he will not provide the team with the type of defense the Kings are looking to establish this season.

Rondo has also become a target of the Brooklyn Nets who are looking to replace Jarrett Jack. There have to be other teams who are looking at what Rondo did last season and are thinking that he would be worth offering a big dollar-short term contract for that type of potential production for a season or two.

Who does that leave for the Kings to target for the point guard position? Ricky Rubio of the Timberwolves appears to have become expendable with Minnesota drafting Kris Dunn. Rubio averages 10.1 points and 8.3 assists per game. A trade would be necessary to bring Rubio to Sacramento. The Kings do have Kosta Koufos and Ben McLemore that could be packaged in a possible exchange. The key worry involving Rubio would be his history of injuries.

Jeremy Lin is an unrestricted free agent who spent last season in Charlotte. He averaged 11.7 points and 3.0 assists per game. Lin made $2-million last season but he will want a raise this year and some security. UPDATE: Lin signed a three-year, $36-million deal with the Brooklyn Nets. That is a $10-million a year raise over his last contract. The Lin signing also potentially affects the Rajon Rondo situation.

Ty Lawson has experience and has been a major disappointment in his last two stops in Houston and Indiana. He also earned over $12-million last season.

Mario Chalmers played for Joerger in Memphis averaging 10.3 points and 3.8 assists per game but then was waived by the club. He made just over $4-million last year.

Ish Smith has become a legitimate starter in the league for the Sixers. He averaged 12.6 points and 6.5 assists per game. Smith will certainly want a raise from his $1.1-million salary. Also is he willing to go from one bad team to another just for the money? UPDATE: Smith signed a three-year,$18-million contract with the Detroit Pistons on Friday.

The best option for the Kings may be to re-sign Seth Curry, the combo point/shooting guard who came on strong for the team in closing days of last season. The team has given Curry – a restricted free agent – a qualifying offer so they have the opportunity to match or exceed any offer Curry would receive from another team.

This would mean the Kings would have to start the season with Curry and rookie Isaiah Cousins while they wait for the Collison situation to play itself out. It would allow the Kings to spend money on shooting guards that they so desperately need plus one of those shooting guards might be able to play some limited time at the point.

The Kings may well need to embrace “positionless” basketball to compensate for the lack of a star point guard. Former head coach George Karl said the best passer on the Kings is DeMarcus Cousins. Maybe the offense will need to flow through the high post until the point guard situation can be firmed up.

The worst thing the Kings could do right now is make a knee-jerk decision and spend too much on a player that they might not need later in the season or in seasons to come.