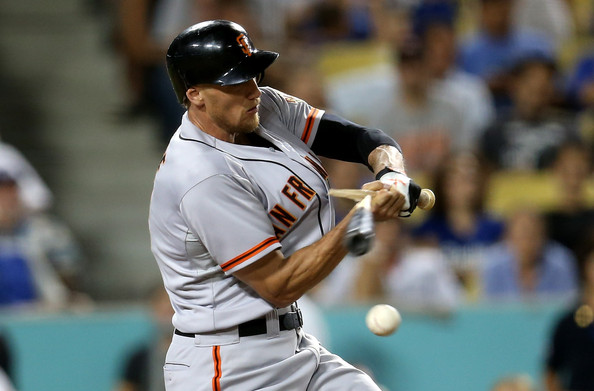 The day started with the Los Angeles Dodgers  in first place with an 18 ½ game lead over the Giants.

The Giants have had a very tough year and the Dodgers are going to win the division but none of that mattered as the Giants beat the Dodgers 4-3 and won three out of four on the road in LA. The rivalry is there. Anytime you can beat the Dodgers is a great day for Giant baseball. No matter how far down in the standings, it is always sweet to beat the hated Dodgers.

Ryan Vogelsong started for San Francisco and he pitched well. Vogelsong went six innings allowing seven hits and three runs. The Dodgers’ pitcher, Edison Volquez also pitched well. Volquez went 5 2/3rds innings giving up three runs on five hits. All three runs given up by Volquez were driven in by the red hot Hunter Pence.  Pence drove in seven runs in the 19-3 blowout Saturday night and he hit two more home runs  and had three RBIs on Sunday. The game summary follows below.

Hunter Pence got the Giants off to a good start when he hit a solo home run to lead of the second. Vogelsong dodged a bullet in the bottom of the fourth when Juan Uribe led off the frame with a triple but the Dodgers failed to score. The Dodgers loaded the bases in the fifth. Adrian Gonzalez was the hero for the Dodgers when he blasted a double to right that cleared the bases and the Dodgers le 3-1 after five.

The lead didn’t last long as that man, Hunter Pence, put the ball into the left field seats driving in Brandon Belt. For Hunter it was his 25th home run of the season and he now has 92 runs batted in so far this year.

The Giants took a 4-3 lead in the eighth. Brett Pill hit a pinch hit home run off Dodger left, Paco Rodriguez. Giants’ relievers Jean Machi, Santiago Casilla and Sergio Romo shut the door on the Dodgers to give the Giants the win.

Game notes- Hunter Pence hit a home run in every game of the four game series. Willie Mays is the only other Giant to do so. It was the ninth career two home run game for Pence and Pence tied a career high with his 25 home runs. Pence’s 19 RBIs over the six game span is the most ever by a Giant since RBIs became an official statistic in 1920.

Winning pitcher was Jean Machi and Sergio Rome picked his 35th save of the year.

Ex-Giant Brian Wilson pitched in the 7th inning for the Dodgers.

Giants are off to New York for a week. They play the Mets for three then travel to the Bronx to play the Yankees.