#1 How key has Golden State’s Draymond Green for this Golden State team? He has been called the quarterback of the team.

#2 Green was called for a foul on the Toronto Raptors’ Pascal Siakam. It was Green who said he would stop Siakam after he scored 32 points on Green in Game 1 and got an earful from rapper Drake on the way back to the dressing room after the game.

#3 What happened to the A’s? They’ve lost five straight games after winning 10 straight and are in Anaheim vs. the LA Angels for three straight games the A’s snapped the losing streak with a win over the Angels on Tuesday night.

#4  The Philadelphia Phillies’ Jay Bruce was added to their lineup for some power, but low and behold former San Francisco Giants outfielder Andrew McCutchen, who tore his ACL and will be out for the rest of the season. The Phillies, who are in first place by a half game over the Braves, will miss McCutchen’s bat out of the lineup.

#5 Back to basketball, how does Golden State handle the absence of a couple of their key players Klay Thompson and Kevin Durant?

London Marq does the Headline Sports podcast each week at http://www.sportsradioservice.com 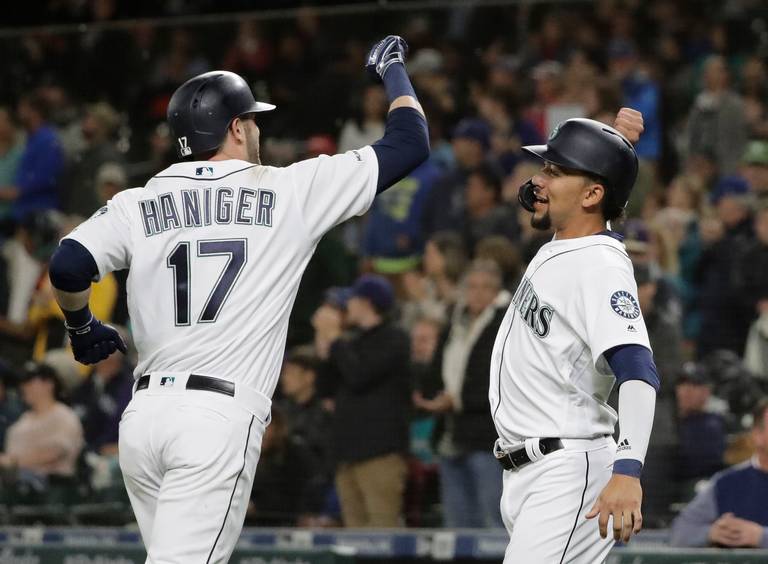 The A’s return home after a successful 6-2 road trip. The A’s were beating the Tigers in one game that was suspended due to bad weather. That game will be completed when the Tigers play the A’s in September. The two losses on the trip happened when the A’s played the Mariners in Seattle.

The Mariners and A’s have met four times this season, and the M’s have won them all. The A’s lost the first two in Japan to open the season and the last two in Seattle on May 13th and 14th. The games in Seattle were close. The Mariners won on May 13th 6-5 even though the A’s hit five home runs in that game. They beat the A’s again on May 14th, 4-3. Since that time the A’s won three in Detroit and three in Cleveland.

The A’s have also moved up in the standings in the AL Central. Oakland ‘s record is 25-25, and they are in third place just 1/2 game behind the surprising Texas Rangers. Seattle, on the other hand, played well to start the season but have fallen on hard times. They currently reside in last place in the AL West with a record of 23-29. They have lost 3 in a row and are 3-7 in their previous 10 games.

The Mariners still have a potent lineup. First baseman Daniel Vogelbach, DH Edwin Encarnacion, outfielders Jay Bruce, Domingo Santana, and Mitch Haniger all have power, and all of them have hurt the A’s with their bats. Infielder Tim Beckham has also punished the A’s with his power.

The pitching matchups for the series will be the following. On Friday, Oakland will send Daniel Mengden (1-1 3.65 ERA) out to pitch. Mengden is 0-2 with an ERA of 5.89 in four career starts against the Mariners. The Mariners will counter with lefty Wade LeBlanc. LeBlanc, in his last outing against the Minnesota Twins, went 2 and 1/3rd innings and gave up seven hits and seven runs. LeBlanc missed five weeks due to a strained oblique. In two starts against the A’s last year, LeBlanc held the A’s scoreless for eleven innings.

On Sunday, The A’s will have lefty Brett Anderson on the mound. Anderson (5-3, ERA 4.14)is returning to action after he left the game last Monday in Cleveland with a cervical strain. Anderson is 8-5 and has an ERA of 2.38 in 20 games against the M’s. Mike Leake goes for Seattle. Leake is 3-5 for the year and has an ERA of 4.73. Leake is 2-2 against Oakland in nine career starts.

The A’s are playing better as the offense has come alive and the pitching has been better. The A’s have seen improvement from Chris Bassitt, Mike Fiers, and Frankie Montas. Anderson has pitched well, and Mengden is still a work in progress.

Following the three-game series with Seattle, the A’s will face the LA Angels and then host the first-place Houston Astros.

The Oakland Athletics have the worst road record (15-31) in the major leagues. It is one of the main reasons they are mired in last place in the American League West and are about to dismantle their team to begin a major rebuilding process.

On Saturday night after jumping out to a 5-0 lead over the New York Mets, the A’s allowed the Metropolitans to claw their way back into the game. The Mets tied the game at 5-5 in the bottom of the eighth inning when Lucas Duda hit a single off Daniel Coulombe that drove Travis d’Arnaud home from second base.

In the bottom of the ninth with two out and the bases empty, Wilmer Flores hit the 1-0 pitch from A’s reliever Simon Castro into the first row of seats in left field to give the Mets a 6-5 win. It was the ninth home run of the season for Flores and the second consecutive win for the Mets (45-50) over the Athletics (43-54).

In the batter’s box